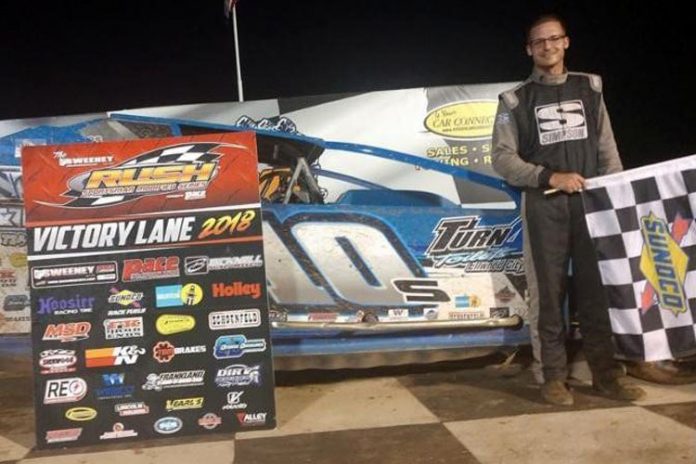 FRANKLIN, PA – The Sweeney Chevrolet Buick GMC RUSH Racing Series powered by Pace Performance had a doubleheader on Sunday in the final appearance of the season at Tri-City Raceway Park for both the RUSH Sportsman Modifieds and RUSH Sprint Cars as Garrett Krummert and Chad Ruhlman were victorious in their respective divisions. It was race #3 of the 2018 season for the Bicknell Sportsman Modified Touring Series with all three races coming since Wednesday in addition to a Bicknell Weekly Series event on Saturday at Pittsburgh’s PA Motor Speedway.

Garrett Krummert wrapped up a busy weekend for himself and the RUSH Sportsman Modifieds putting on a dominating performance in the 20-lap feature for his first career Bicknell Touring Series victory, worth $600. Krummert, who won the May 20 Bicknell Weekly Series race at Tri-City, competed in all four RUSH Sportsman Modified races in five days with two wins, a second, and a sixth place in addition to a runner-up and third place finish with the Big-Block Modifieds.

“It’s been good,” acknowledged the 30-year-old Ellwood City, Pa. racer when asked about his week. “We weren’t very good when we unloaded, but kept working on it and working on it after the heat and dash, and were pretty close right there. It helped making the dash to be able to try some things. Typically we don’t change too much, but tonight I think we changed about everything; two spring, four bars- we moved everything. It was a lot of work, but it was good. These cars are so evenly matched with the motors. We’ve won six races, but these guys are right there and just as good. Once you get that clean air, it really helps. I have to thank Jerry Schaffer. He owns this thing and just lets me play with it. He never comes when we win except here so I guess we’re going to have to get another race here.”

The RUSH Sportsman Modified feature followed the “410” Sprint Car feature, and Krummert utilized a similar line that most of the Sprint Cars were using around the top side of the fast half-mile speedway. Krummert powered into the lead past pole-sitter Justin Shea on the opening lap. Shea did pull even on lap two, before Krummert got away using the momentum off the top.


After falling to fourth, Brandon Ritchey passed Kyle Martell for third on lap two then closed in on Shea on lap three. The two ran side-by-side in the race for second, while Krummert began to pull away. Martell caught up to Ritchey on lap six making it a three-car battle for the runner-up spot before the event’s only caution when Steve Slater spun after contact battling with former “410” Sprint Car standout, Rob Eyler, who was making his Modified debut.

When green replaced yellow, it was three-wide for third down the backstretch with seventh starting Chas Wolbert passing both Martell and Ritchey. On lap 10, Martell made the pass of Ritchey for fourth. Back up front, Krummert was able to extend his lead every lap as the final 14 circuits went caution-free as Krummert’s margin of victory was 3.820 seconds in the Rentools & Equipment/Fombell General Store/Turn 4 Toilets-sponsored #10s. Krummert became the 13th different driver all-time to win a Bicknell Touring Series event. The victory was also Krummert’s sixth overall of the season, which propelled him into the Bicknell Weekly Series points lead.

Shea was second ending a solid night for the hometown Franklin, Pa. driver as he set fast time in $100 Ohio Intra Express “Shock the Clock” Qualifying, won his heat race, and the dash, but came up short on sweeping the night. Wolbert “shut the door” on Martell on the final lap to secure third as that move garnered him the Dirt Defender “Defensive Drive of the Night” in addition to picking up the $100 Precise Racing Products “Pedal Down” Hard Charger gift card. Martell was fourth over Ritchey, who won the second heat race and has a two-point lead over Krummert in the Bicknell Tour points.

Completing the top 10 were Kole Holden, Josh Deems, Brian Schaffer, Steve Slater, and Blaze Myers. After mechanical issues forced him to miss the heat race, Jeremy Weaver got the car fixed and finished 12th to pick up the Sherwood Wheels “Man of Steel” honors. Jordan Ehrenberg finished last and was named the TBM Brakes “Tough Brake of the Night”.

Chad Ruhlman may be a Sprint Car rookie, but you’d never know it the way he’s performed in the inaugural season for the RUSH-sanctioned non-wing cars. The former Late Model and E-Mod standout returned to Tri-City on Sunday night, the place of his only defeat this season, and took home the 15-lap, $500 Bonnell’s Rod Shop Weekly Series victory. Ruhlman has now won six of his seven RUSH Sprint Car starts, while missing three other shows due to work obligations.

“I knew nothing about Sprint Cars- didn’t even know how to start one until we went to Bradford,” explained the 41-year-old Bemus Point, NY driver. “This is an affordable way to get into open wheel racing. Two guys can do this without killing themselves and have a weekly job. I’m glad I can do this with my family and friends and not go broke doing it. I’d like thank Vicki (Emig) and everyone that’s part of this deal to get it going. Kevin and I have been working really hard in the shop. He’s going to be in this thing shortly. We’re learning this together. I know the other competitors are getting pretty mad- sorry, but we’re working hard. This is a good group of guys to race with and I’m just glad to be part of it. The track is how I always remember Tri-City being. I don’t know why there aren’t double the cars here. It’s a great surface. You could run all over it.”

Ruhlman was shot out of a cannon on the opening lap going fourth to first past Shawn Smith, Zach Morrow, and Brandon Hawkins. Arnie Kent, who has been the lone driver to beat Ruhlman this season, started sixth and passed Morrow for fourth on lap three. Hawkins and Smith raced side-by-side lap after lap beginning on lap four in the battle for second, while Morrow regained fourth from Kent on lap six. It was an amazing battle between Hawkins and Smith along with Morrow and Kent as the foursome continued to race side-by-side until a spin by Steve Cousins with eight laps scored.

When racing resumed, Morrow got an excellent restart passing Hawkins and Smith both, while Kent followed in third. Smith would soon exit the track ending what had been his season’s best performance. While Ruhlman distanced himself from the field and went on to win in his North Star Unlimited/Rand Machining/Premier Communications/Ruhlman Race Cars/Close Racing Supply-sponsored #87R by 3.9 seconds, the race behind him continued to be intense.

Kent and Morrow raced side-by-side for second over the final six laps trading the spot back and forth with Kent edging out Morrow by 0.001 of a second! Kent’s runner-up propelled him into the $5,000 Bonnell’s Rod Shop Weekly Series Championship points lead. Brandon Hawkins’ fourth place finish was his fourth top five of the season. After struggling in his heat race finishing last, Gale Ruth, Jr. raced from 11th to fifth, but lost the points lead to Kent. Brad Blackshear finished 10th in his debut as he became the 16th different car to race this year. Ruhlman and Morrow won the heat races.

The RUSH Sprint Cars have a busy week ahead beginning on Wednesday (July 18) at Lernerville Speedway for the third “Wednesday Night Lightning Series” event then will join up with Tony Stewart’s Arctic Cat All Star Circuit of Champions on Friday night at Eriez Speedway followed by Saturday night at Pittsburgh’s PA Motor Speedway. Friday’s event will pay $600 to-win, $150 to-start. 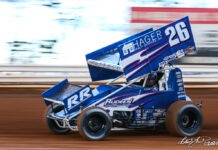