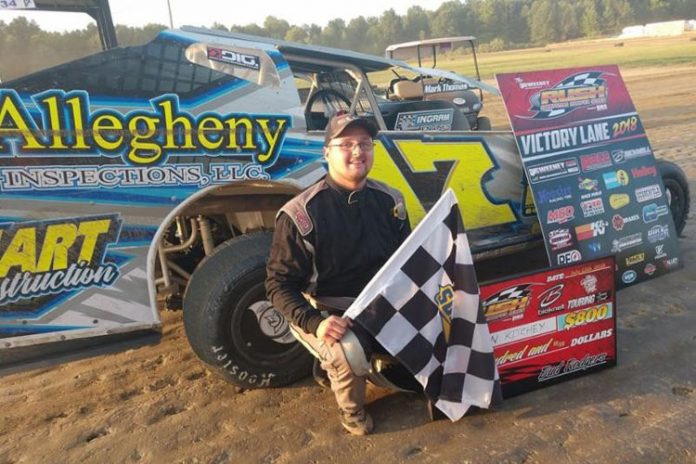 CORTLAND, OH – The Sweeney Chevrolet Buick GMC RUSH Sportsman Modified Series powered by Pace Performance returned to Expo Speedway on Thursday for night two of racing as part of the 172nd annual Trumbull County Fair. It was the first time in Series history for back-to-back Bicknell Racing Products Touring Series events at the same venue. A total of 23 different drivers participated over the two evenings at the 5/8-mile track, and the Fair has already expressed their desire to bring the Series back for two nights in 2019.

Brandon Ritchey led all 20 laps of the feature driving a perfect race through lapped traffic over the final seven laps to capture his first career Bicknell Touring Series victory. Ritchey also became the fifth different winner in five races held over the past four seasons for the division at Expo! The win was worth an all-time division-high $1,000 after Rockabilly Ruckus Ohio posted a $200 bonus for finishing in the top five both nights. With a second place finish on Wednesday, Ritchey takes the early Bicknell Tour points lead.

“Man I’ve wanted to win one of these checks so bad,” expressed the 24-year-old Seneca, Pa. driver. “I screwed up at Lernerville (Speedway) last year when I thought I had it. This feels so good. Hats off to my dad and grandpa first along with my crew- Dave works his butt off and does anything you ask. Pill draws are everything in crate racing and especially on a track like this. To start on the front row both nights is awesome. I knew Chas (Wolbert) and Garrett (Krummert) were probably coming. I tried to slow down a bit in traffic so I didn’t make any mistakes. Sometimes slower is faster. Those guys are top notch runners so to beat them it really means a lot.”

Ritchey used the outside on the start to power into the lead, while pole-sitter Jeremy Weaver faded to fifth behind fourth starting Chas Wolbert, Darin Gallagher, and Garrett Krummert after the opening lap. Eighth starting Rob Kristyak was able to move into the top five on lap two as him and Rocky Kugel dropped Weaver back two more spots.


Krummert was able to get under Gallagher off turn four and out-drag him down the frontstretch to take third on lap four. Krummert then began to close in on Wolbert on lap six, while Ritchey pulled away. By lap nine, Krummert caught Wolbert and the two ran side-by-side on lap 10; however, Krummert was unable to make the pass.

With caution-free racing taking place, Ritchey caught lapped traffic on lap 13 as he had a half-straightaway lead built up. Heavy traffic came into play on lap 15, but Ritchey was able to make the right moves, while Wolbert and Krummert continued to battle. Krummert got under Wolbert off turn two and finally made the pass for second down the backstretch on lap 18.

Ritchey’s lead was still a half-straightaway by the time Krummert got to second. Even though Krummert was able to close on the final lap, the lead was too insurmountable as Ritchey crossed the finish first in the Clair Ritchey-owned, Allegheny Inspections/Ubers Custom Processing/Hart Construction/Dig Performance/BCS Residential & Commercial Cleaning-sponsored #17. Ritchey became the 12th different Bicknell Touring Series winner all-time.

After racing from sixth to third in The Modified Tour big-block feature, Krummert capped off an excellent night with a second place finish after starting fifth in the RUSH Sportsman Modified feature for the four-time 2018 Bicknell Weekly Series winner.

“You can leave here with a lot of messed up stuff so I’m pretty happy to finish second and third with both cars,” described the 30-year-old Ellwood City, Pa. driver. “It’s tough when you get spaced out on this track to try and run people down if they don’t make any mistakes. Wolbert was holding me up the whole time. I just couldn’t get around him. No Chas was good; he was just a little tight, but it was a lot of fun. I have to thank Jerry Schaffer. He owns this car, but couldn’t be here tonight. He gives us good equipment to keep doing this. Also have to thank my wife, my crew chief Ryan, and my mom and dad are here.”

Wolbert improved on his fourth place finish on Wednesday with a third place to earn an extra $200 from Rockabilly Ruckus Ohio for also finishing in the top five both nights. Darin Gallagher had a solid fourth in his second night driving Steve Slater’s second car improving on his 13th place finish on Wednesday night. Gallagher competed in the RUSH Sprint Car division earlier in the season. Kristyak was fifth and was chosen as the Dirt Defender “Defensive Drive of the Night” after holding off Kugel for fifth for much of the race. Kugel was sixth. Justin Shea went from 12th to seventh.

Wednesday’s winner, Kyle Martell, who had a $1,200 bonus ($1000 from Russ King Racing & $200 from Rockabilly Ruckus OH) if he could win the feature, was eighth. Martell’s night started off good drawing the best pill to start on the pole of heat one, but faded to fourth and missed the redraw. He then was docked a row for pulling out of line and jumping the initial start of the feature before Gary Haupt made contact with an infield tire. Haupt was selected as the TBM Brakes “Tough Brake of the Night” recipient.

Weaver, who started on the pole, dropped to ninth at the finish. Jessica Kriegisch was 10th and received a $200 bonus from Rockabilly Ruckus Ohio for being the highest finishing female racer. Veteran racer Alan Dellinger was able to salvage a decent ending to two tough nights for Bob Williams’ team. Dellinger dropped out of Wednesday’s feature with mechanical issues. On Thursday, the team’s issues continued as the car wouldn’t start for the heat or feature; however, got the break they needed when an opening lap caution forced a complete restart and Dellinger was able to make it out though a long way behind the field.

Dellinger was able to eventually catch the back of the field and work his way from 21st to 14th at the finish despite no cautions. That would pay dividends as he picked up the Sherwood Wheels “Man of Steel” award for a free Sherwood Steel Wheel, the $200 Rockabilly Ruckus Ohio Hard Charger, and the $100 Precise Racing Products “Pedal Down” Hard Charger gift card!

Heat wins went to Kristyak, Slater, and Wolbert over the 21-car field. The Bicknell Racing Products Touring Series will return to action on Sunday evening (July 15) at Tri-City Raceway Park in Franklin, Pa. for a $600 to-win Bicknell Tour show. Ohio Intra Express has posted $100 for the fastest qualifier.

A special thanks to Rockabilly Ruckus Ohio and Russ King Racing for posting bonuses over the two-day program. Rockabilly offered $200 to any driver that finished in the top five both nights, $200 to the hard charger, and $200 to the top female racer. RKR offered a $1,000 bonus if any driver could win both nights.