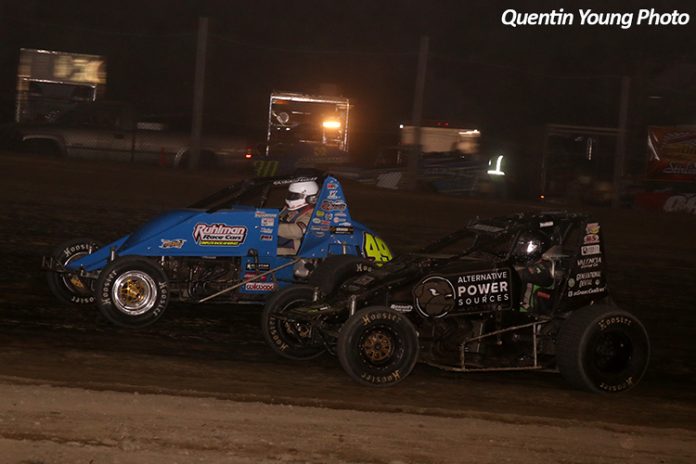 BATAVIA, NY – The Sweeney Chevrolet Buick GMC RUSH Racing Series powered by Pace Performance was part of the second annual “Topless Nationals” on Saturday and Sunday at Genesee Speedway. The RUSH Sprint Cars made their first ever appearance at the track for their inaugural “Empire State Classic” with Chad Ruhlman winning both Bonnell’s Rod Shop Weekly Series special events, while Jason Genco captured the $4,500 sweep in the Sweeney Weekly Series specials for the RUSH Late Models. Sixteen Sprint Car teams from four different states made the trip to the Batavia, New York 1/3-mile oval by traveling between two and six hours. It marked the first time full-size Sprint Cars have raced at Genesee since 2009 when winged “360s” were part of the track’s program.

“We were very pleased with the outcome at Genesee,” stated RUSH Director Vicki Emig. “To have 16 of our Sprint teams travel as far as they did to participate in this inaugural event speaks volumes about the program. This was very important to introduce our cost-containment Sprint Car division to yet another region. There’s a lot of interest in the program in western New York and we’re hopeful to grow it in 2019. There was a lot of positive feedback over the two days. The racers did a great job with only three cautions all weekend. We have to thank Genesee promoter Jim Johnson for including the Sprints part of his Topless Nationals weekend. Also thanks to Pace Performance for sponsoring one pit pass for each driver along with Jennerstown Engine Technologies and 955 Automotive for presenting the $100 hard charger each night. Our RUSH Late Models also had a strong turnout with over 30 car each night and put on great racing.”

Chad Ruhlman’s dream season with the RUSH Sprint Cars continued over the weekend at Genesee. Not only has Ruhlman been spectacular in his rookie Sprint Car season he’s been lucky as well. On Saturday night, Ruhlman drew the best pill to earn the pole for the first heat race, which he won convincingly, then redrew the pole for the feature. Ruhlman would control the 20-lap event as only one caution would slow his run to the $800 payday. Then on Sunday, Ruhlman made a three-wide move on lap seven to take the lead from Brian Woodhall and went on for another $800 victory. All told, Ruhlman earned $2,000 including $1,600 in feature wins, $300 from RUSH for being the overall top point man, and $100 for being Sunday’s hard charger.

Ruhlman made the bottom work on the start to take the early feature lead on Saturday over Shawn Smith. Woodhall started sixth and had a great start racing to fourth on the opening lap then worked past Steve Cousins for third on lap two. Zack Bealer was making his debut subbing for Phil Thornton. Bealer was fastest in his warm-up group then went from seventh to fourth in his heat. Bealer started seventh in the feature and cracked the top five on lap four taking the spot from Gale Ruth, Jr.


Ruhlman began to pull away from Smith and Woodhall on lap five, and by the halfway point stretched his lead to a straightaway. Ruhlman caught lapped traffic on lap 13 and was working his way by some of the slower cars when brothers Brandon and Scott Hawkins tangled in turn one with 14 laps scored to bring out the only caution of the night.

Back under green, Ruhlman resumed his lead over Smith and Woodhall, but it was three-wide for fourth with Bealer and Ruth moving past Cousins for fourth and fifth respectively. On lap 16, Ruth made the move on Bealer for fourth. Ruhlman’s 12th win of the season came by 1.818 seconds in his North Star Unlimited/Rand Machining/Premier Communications/Ruhlman Race Cars/Close Racing Supply-sponsored #87R.

“Wow this is quite the place,” stated the 41-year-old Bemus Point, NY standout. “This is the first time I’ve ever been here. It reminds of the old Eriez Speedway. You wanted to be on the top early and I thought it was going to be top dominant then I had to move down and keep it straight on the bottom. Thanks to Vicki Emig and everyone at RUSH along with Pace Performance for developing this low budget class. This reminds me of the old Modified class at Eldora that didn’t have spoilers and had a flat roof. You really had to get up on the wheel so I think the background I have in the Midwest has really helped my program out.”

After crashing out of his first two RUSH Sprint Car starts, Woodhall had a fine third place finish over Ruth and Bealer. After falling from second to seventh in his heat race, Brian Ruhlman turned it around in the feature going 13th to ninth to earn the $100 “Pedal Down” Hard Charger award from Jennerstown Engine Technologies.

Sunday’s $800 win wasn’t as easy for Chad Ruhlman, who started the 20 lapper from fourth, at least early on. Woodhall raced out to the early lead over Bealer as Ruhlman passed Smith for third on the opening lap. By lap three, it was a three-car race for the lead with Ruhlman moving to second. Ruhlman challenged Woodhall as the two raced side-by-side for the lead on lap four before the event’s only caution when Arnie Kent spun.

Back under green, the trio resumed their battle for the lead. Woodhall maintained the top spot, while Bealer was able to get under Ruhlman as they raced side-by-side for runner-up. On lap seven, it was three-wide for the lead with Ruhlman coming out on top over Bealer and Woodhall. Seventh starting Zach Morrow moved into the top five on 15 when he drove under Brian Ruhlman then two laps later put a slider on Smith for fourth.

Back up front, Chad Ruhlman really pulled away in the late stages of the event as the Bonnell’s Rod Shop $5,000 Weekly Series point leader captured his 13th win of the season by a margin of 4.985 seconds. “The track is awesome tonight,” expressed Ruhlman. “I didn’t know if I should chase the moisture or the lane of rubber. The top kind of went away a couple times then came back, and the lane of rubber moved. It’s a very dynamic track. I really enjoyed coming here. I’m glad we were included on this deal. The money is good, and I’m excited to come back.”

Bealer, an eastern Pennsylvania Micro Sprint racer, closed out a very successful weekend debut with RUSH, in second. Woodhall had a very positive weekend with back-to-back third places finishes. Morrow was fourth. Smith held on for fifth to run his top five streak to seven straight races! Dave Hawkins and Bealer picked up Sunday’s heat races over the 16-car field. Joe McEwen hopped a wheel during the second heat race and went for nasty end over end flip. He was okay, but done for the night.

The RUSH Sprint Cars have a pair of events for the upcoming week with the fifth and final “Wednesday Night Lightning” Series event at Lernerville Speedway on Wednesday (September 19) followed by the final appearance of the season at Pittsburgh’s PA Motor Speedway in Imperial, Pa. on Saturday night. The “Wednesday Night Lightning” Series will crown a $1,000 champion as the top 10 in points share in $3,000. Ruth has a six-point lead on Arnie Kent.