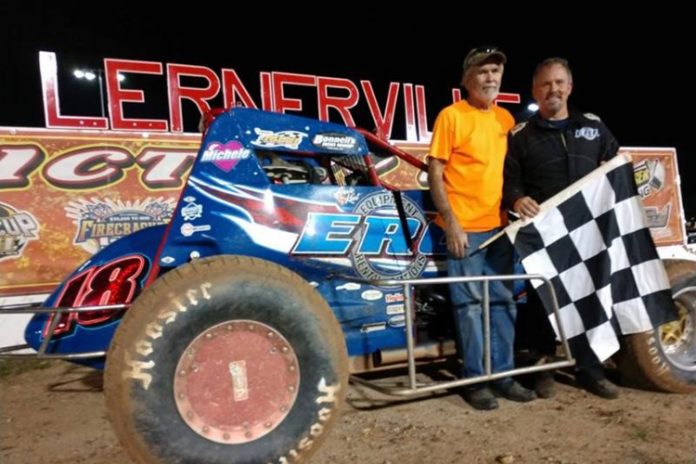 PULASKI, PA – Not only will Arnie Kent go down in the record books as the first ever Sweeney Chevrolet Buick GMC RUSH Sprint Car winner, he’ll also be remembered for capturing the inaugural title for the “Wednesday Night Lightning” Series at Lernerville Speedway in Sarver, Pa. Kent sealed the $1,000 title last Wednesday night (September 19) in the fifth and final event for the separate mini series that was part of the Bonnell’s Weekly Series Championship.

After three rainouts to start the season, the RUSH Sprint Cars finally debuted on May 16 at Lernerville with 12 cars in competition. The 53-year-old Kent of New Castle, Pa. may have led all 20 laps on that night, but he had to hold off a furious charge by fifth starting Gale Ruth, Jr. and young Dalton Daniels. Kent’s margin of victory in his Equipment Rentals-sponsored #18 was by a mere 0.139 of a second!

While that would be Kent’s only win during “Wednesday Night Lightning”, he’d finish the five-night mini series with a perfect five-for-five in top fives including four podium finishes. Kent’s runner-up after starting seventh on September 19 coupled with Ruth’s 10th place was enough to allow Kent to turn a six-point deficit into a six-point championship margin.

“Arnie was one of the racers that was part of the original meeting on the concept of the class and participated in the test sessions at Lernerville and Stateline Speedways,” explained RUSH Direct Vicki Emig. “We’ve known Arnie for many years as he came up through the ranks and was one of the top ‘410’ Sprint Car racers during my tenure when I owned Mercer Raceway Park. Over the years he was also very competitive and enjoyed non-wing Sprint Car racing in our region. It has been great having his support of the RUSH Sprint Car concept from the beginning.”


Ruth meanwhile was able to win the June 20 and August 15 events and had two other top fives, which allowed the Culver Motorsports-owned, Wilson Hardwoods/F5 Designs/Adams Family-sponsored #1C to take the $500 runner-up point money. Zach Morrow’s 10th place finish in the opener put him in a hole; however, he ended the Series with four straight top fives including wins in two of the last three events! Morrow will pocket $350 at the year-end awards banquet in addition to his Bonnell’s Rod Shop Weekly Series Championship monies.

Completing the top 10 in points that will also share in the $3,000 point fund are Scott Hawkins, Dave Hawkins, Steve Cousins, Brandon Hawkins, Dalton Daniels, Joe McEwen, and Brad Blackshear. The complete points and point fund monies are posted below. Special thanks to rookie Steve Cousins, who made the three-hour tow each way for all five of the midweek events. Eighteen of the 21 cars that have competed in 2018 made at least one start in the “Wednesday Night Lightning” Series.

“We have to thank Lernerville for giving the RUSH Sprints the ability to headline their new Wednesday night program,” stated Emig. “Lernerville has been an important part of allowing the division to get off the ground by basically giving the class a home with 10 events. With them doing the Wednesday programs, we were able to come up with this additional $3,000 point fund. Ten other tracks then gave us the balance of the 18 shows. Also, we have to thank the racers for participating in these shows, and we were very pleased that 21 different cars have hit the speedway for competition thus far in the inaugural season.”

After the first ever show this Saturday (September 29) at McKean County Family Raceway in East Smethport, Pa., the RUSH Sprint Cars will close out the inaugural season at Lernerville as part of the “Steel City Stampede” October 11-13. Open practice will be held on Thursday the 11th with heat races on the 12th and the $800 to-win, $160 to-start feature on the 13th. The top 20 spots in the $20,075 Bonnell’s Rod Shop Weekly Series Championship will be decided.