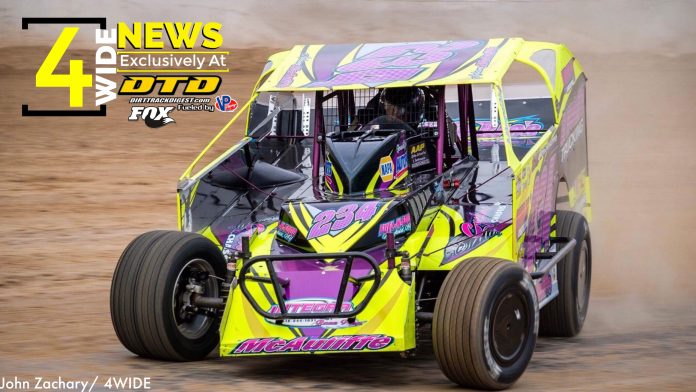 Adam McAuliffe checks in after a Third Place finish this weekend while invading Delaware. It was the opening weekend at Georgetown Speedway for the Short Track Super Series’ L&J Sheet Metal Crate 602 Sportsman Modified event, and Adam out of Broadalbin, N.Y., was one of many invaders who took the opportunity to start their season early this weekend.

HOW WAS YOUR WEEKEND AT GEORGETOWN SPEEDWAY ( DEL) ?

Georgetown Speedway  is a super nice place.   I had a blast and everything went well besides the little rain delay.  We were 3rd quick all weekend with our DKM Cyclone. We did some fine tuning for the feature and ended up just a little too tight in the beginning,  but I’m pretty pleased coming home in a podium position (3rd).

DID YOU LEARN ANYTHING TO TAKE WITH YOU HEADING INTO THE ‘18 SEASON?


I Didn’t really learn too much to take on for the rest of the season,  but I think we have some good notes for the next time we head south.

I Plan on running Albany-Saratoga Speedway on Friday Nights.   I’d like to chase the Sportsman Championship there this year, I think we have a good shot.

The number 234 comes from my Uncle John’s #23 , he has raced Sportsman for a long time,  and the 4 was my grandfather who used to race street stocks a long time ago at Malta so I just combined them.

WHAT IS YOUR PROUDEST RACING MOMENT?

My proudest moment was probably winning the second night out of the box last year with our new DKM car at Malta.  I have always wanted to get a win there.

WHAT IS THE ONE RACE YOU WANT TO WIN ?

I’d really like to win Super DIRT Week in Oswego this year.   We have been fast the last two years there, now we just need a little luck.  I mostly want to win that race because it’s Super DIRT Week, everyone wants to win at Super DIRT Week.