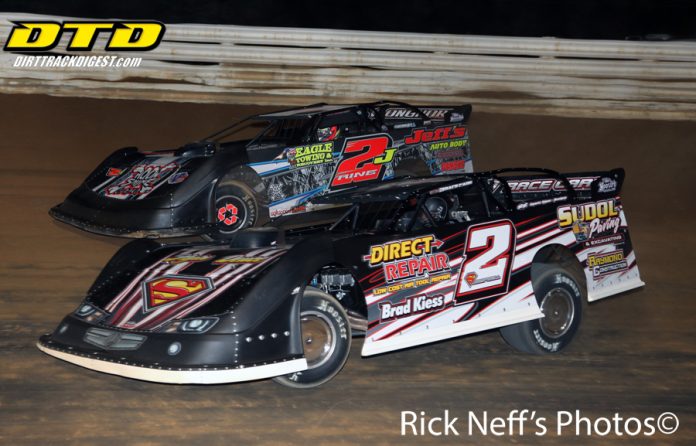 Eric Tomacek of Abbottstown put on a show around the top of the race track to score his first win of the season in the 25-lap 360 sprint car main event, while Tommy Slanker of York out-dueled Brad Mitch of McClure for this third victory of the year in the 15-lap pro stock main event.

Selinsgrove Speedway will present a two-race weekend Friday, June 16 and Saturday, June 17. Friday night’s race at 8 p.m. will feature the first appearance of the season by the 410 sprint cars in the 30-lap, $4,000-to-win Ray Tilley Classic plus 355 econo late models. Track gates on Friday will open at 6 p.m.

Polesitter Matt Cosner and second-place starter Rick Eckert drag raced around the half-mile oval at the start of the late model main event. Eckert had a slight lead until Cosner pulled in front on lap three. By lap seven, fourth-place starter Jeff Rine and Eckert were dueling for second as Cosner led the way.

At the lap nine marker, Cosner began to encounter slower traffic. Kyle Hardy, who started twelfth, showed a lot of speed around the top of the race track and stormed into the fourth spot on lap 12. He then passed Rine for third on the 17th circuit. At the halfway point, Cosner led Eckert, Rine, and Hardy.

Hardy eventually moved into second and began to reel in Cosner. The race’s first caution flag unfurled on lap 28 when Austin Hubbard’s car rolled to a stop. When the race resumed, Hardy drifted too high and lost spots as a war on wheels unfolded at the front of the pack. On the 30th circuit, Rine took the lead from Cosner with an outside pass in turn four.

Despite two more restarts, Rine held off Eckert for the checkered flag by just .89 of second. Cosner, Hardy, and Steve Campbell rounded out the top five.

Outside front row starter Eric Tomacek powered into the lead at the start of the 360 sprint car feature over polesitter Derek Steward. Fourth-place starter Michael Walter drove into the second spot on lap three and began to close in on Tomacek. By lap five, Tomacek was the pacesetter over Walter, fifth-place starter Cody Keller, Steward, and third-place starter Justin Whittal.

Chad Layton, who started seventh, advanced to fourth on lap nine. At the halfway point, Walter was in striking distance in slower traffic. The first caution flag unfurled at halfway for Michael Thomas who was able to rejoin the race.

When the race resumed, 11th-place starter and current points leader Davie Franek stormed into the top five. With 10 laps remaining, a close three-car battle unfolded between Walter, Keller, and Layton for the runner-up spot.

In the final laps, Layton posed a threat to Walter for the second spot as Tomacek drove to victory. Walter finished a strong second with Layton, Keller, and Franek rounding out the top five.

For the lap five restart, Stroup inherited the lead only to have seventh-place starter Brad Mitch power into the front spot a lap later. Current points leader and sixth-place starter Tommy Slanker followed Mitch in the second position. For the next several laps, Mitch and Slanker see-sawed for the lead and switched lanes around the quick half-mile oval.

With three laps remaining, Slanker secured the lead and drove to victory over Mitch, Shaun Lawton, Stroup, and Noah Jensen in the top five. 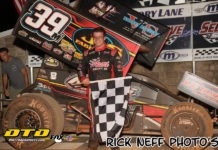