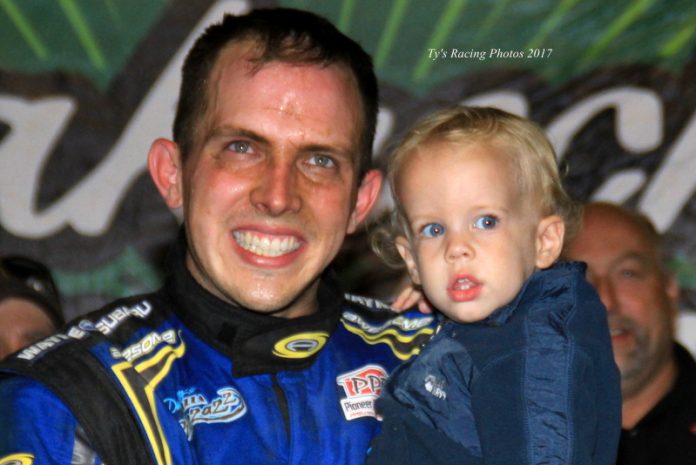 SELINSGROVE, PA –  It only took a few minutes for Billy Pauch Jr. to think of a way to spend the $10,000 he’d just won in the Wayne Subaru World Series 100 for SpeedSTRs presented by BusinessLinkPrint.com.

“I’m going to try and talk (car owner Mike) Heffner into letting me take his Midget to St. Louis and run it in that indoor show this winter,” grinned the Milford, NJ hotshoe.

Saturday’s race at Selinsgrove Speedway was part of the inaugural World Series of Dirt Racing presented by Bob Hilbert Sportswear. The 100-lap grind on the big half-mile produced many pre-race questions regarding fuel mileage, tire wear, and engine durability, but the 27 drivers in the starting field did a great job of managing their mounts and the cars held up just fine. At the checkered there were still 17 cars on the lead lap. And it was a good race, too, with quite a bit of passing at the front of the pack.

Pauch Jr. started second, outside pole sitter and fast timer Tim Iulg. Pauch outgunned Iulg into turn one, but his lead lasted less than ten laps before Ryan Godown darted past him to take the top spot. Billy Pauch Sr. ducked under his son for the runner-up position just one circuit after Godown took the lead.

The first 28 tours went clean and green, then Pauch Sr. slowed while running second to bring out the yellow. Most of the field pitted under the caution, but Pauch Jr., Steve Buckwalter, and Brad Brightbill stayed on the track to take over the top three spots.

On the restart, S. Buckwalter zipped past Junior for the lead and Godown worked his way back up to third. The leaders all pitted under the next caution, at lap 48, putting Tom Mayberry at the head of the pack when the race went back to green. Mayberry’s teammate for the weekend, Alex Bright, was second and Ohio’s Matt Westfall sat third – but he didn’t stay there for long.

On the restart, Westfall threaded the needle between the Rehrig Racing teammates, going to the front as they danced through turns one and two. Mayberry found the high line as the race reached its midpoint, sweeping around Westfall to regain command on lap 60. The red flag was displayed with 61 complete because Chad Jones flipped his SpeedSTR in turn three. Jones was not injured in the mishap.

When the yellow lights replaced the red, Mayberry and Westfall headed to the pits for fuel, handing the top spot to 20th starter Tim Buckwalter. Matt Janisch, who started right behind T. Buckwalter in 21st, wrestled the lead from Buckwalter with 30 to go. Laps 71 through 83 were highlighted by a terrific battle for the race lead between Nazareth, PA’s Janisch and T. Buckwalter with Timmy hugging the bottom and Janisch wheeling the high side. They ran side by side, lap after lap, without touching as they swapped the point again and again. Janisch was scored as the leader – by inches – when lap 83 was completed and the yellow waved once more.

Pauch Jr. was riding through the middle stages, admittedly conserving his equipment and tires (his team put on a new right-rear around the halfway mark) and was now back up to third. On lap 87, Billy Jr. raced back into the lead, bringing Godown with him and a hard charging Alex Bright flew into third place, dropping Janisch to fourth and into the clutches of Steve Buckwalter.

Pauch Jr. held on for the win as Bright, who appeared to have the fastest car at the end of the race, simply running out of laps and settling for second. Steve Buckwalter wound up third with Godown and Janisch completing the top five.

“Really happy to win this for Mike Heffner and his dad; it’s been a rough month for those guys,” said Pauch as he posed with the big check in victory lane.

Kunkletown, Pa’s Ryan Smith made it a clean sweep in the FK Rod Ends 25-lap main for 360 Sprint Cars. His $3,000 victory came after he set quick time on Friday afternoon, then won his heat race, too.

Smith, in the Specialty Rigging No. 10x, started sixth in the 25-lapper. He passed Steve Buckwalter for second on lap five as pole sitter Davie Franek set the pace. With ten to go, Franek bobbled a bit in turn four, and Smith rocketed around him to take command. Buckwalter got by Franek for second with eight circuits remaining, but Smith had already checked out by that time. Smith romped to victory and, in the process, set a new Selinsgrove track record for 25-laps at 7:27.06.

Middleburg, PA resident Dylan Yoder took advantage of a restart with 16 laps to go in the 40-lap Super Late Model feature, sailing into the first corner under Frye and coming off turn two with the race lead.

“Just drove it in there and hoped it would stick,” Yoder commented afterward.

Yoder went on to score the triumph, his second of the season at Selinsgrove. Gene Knaub passed Frye late in the going to register the runner-up finish, with Jim Bernheisel and Jim Yoder finishing fourth and fifth, respectively.

The World Series of Dirt Racing wraps up on Sunday afternoon with a complete program of 410 Sprint Cars and A-Mains for the 602 Modifieds and Street Stocks. The All Star Slingshots will also compete on the half-mile oval in the 12-lap Slingshot Derby that will decide the 2018 World Champion. 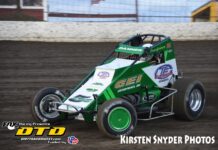