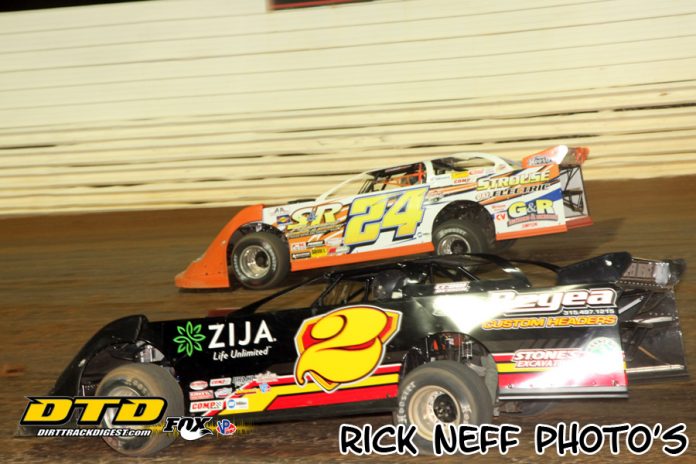 Stone earned $3,000 for his first win of the season and seventh career at the track. He became the division’s sixth different winner in as many races on Jeff’s Auto Body Night.

Jason Covert of Dover was the night’s fast qualifier over the 26-car super late model field with a lap time of 19.233 seconds.

Jared Fullkroad of Mifflintown won his first career race in the 20-lap Mason Dixon Limited Late Model Series event following an intense three-car battle for the lead and win. Fulkroad, who started his racing career in go karts on the speedway’s one-fifth mile track, became another driver to  win races on both the small and big tracks.

Shaun Lawton of Bloomsburg drove to his first win of the season and his first in the annual A&A Auto Stores Pro Stock 20 that was worth $1,000.


Tom Brunson of Middleburg held off late-race challenges from Jake Jones of Cogan Station for his first career win in the 12-lap roadrunner race.

Selinsgrove Speedway will be back in action at 7 p.m. Saturday, June 15, with the Joe Whitcomb Memorial for 360 sprint cars sanctioned by the Patriot Sprint Tour. The super late models, pro stocks, and roadrunners will round out the four division racing program sponsored by Advanced Concrete Systems. Track gates will open at 5 p.m.

The top three ran the first third of the race nose to tail but on lap 12 Eckert used a lapped car to pick off Bernheisel and take the lead as the pair came off turn four.  Two laps later, it was Covert taking over second.

Eckert continued to open the lead and looked like a sure winner when he hit the first turn wall in turn one after the front spoiler reportedly bent under the front end of his race car and ended his night on lap 24. When the lead was handed over to Covert, his car developed a flat tire while pacing under caution due to debris, according to reports from the pit area.  As Covert withdrew from the race, Bernheisel re-assumed the point.

With Bernheisel running the high groove, second place Dan Stone tested him on the low side and raced side by side. Stone then went to the top looking for a lane and just nosed ahead at the line for the win.  Coleby Frye, Knaub and Hayes Mattern rounded out the top five.

Kyle Bachman took the Pro Stock 20 lead from the pole and was followed by Shaun Lawton, Brandon Moser, AJ Hoffman and AJ Stroup.  Lawton shot low off the fourth turn on lap three for the front spot and immediately opened a lead.

John Schoch brought out the yellow flag when he spun on lap eight.

Lawton continued to lead but on the final lap Bachman pulled even.  As the pair entered turn one, they touched with Bachman spinning out.   Lawton led the final lap winning over Stroup, Hoffman, Tommy Dawson and Brandon Moser.

Miller continued to stalk Fulkroad and really started to press with five laps to go.  On the last lap a lapped car got together with Miller.  Miller bicycled through the second turn allowing McGinnis to get by.

The win was Fulkroad’s first in the full sized cars after winning many times on the 1/5th mile inner oval.  McGinnis, Miller, Derick Garman and Yoder rounded out the top five.

After several tries to get the roadrunner feature underway, Cory Lindenmuth took the lead only to give it up a lap later to Curtis Lawton on the backstretch.  Tom and Will Brunson also got by Lindenmuth for second and third.  Terry Kramer rounded out the top five.

Kramer and Jake Jones were soon battling for fourth as Will Brunson pressured Lawton with the pair getting together and spinning in the fourth turn handing the lead to Tom Brunson.

Brunson ran the final laps winning over Jones, Will Brunson, Kramer and Lawton.

Roadrunner heats were won by Lawton and Will Brunson. 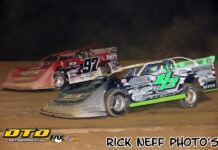