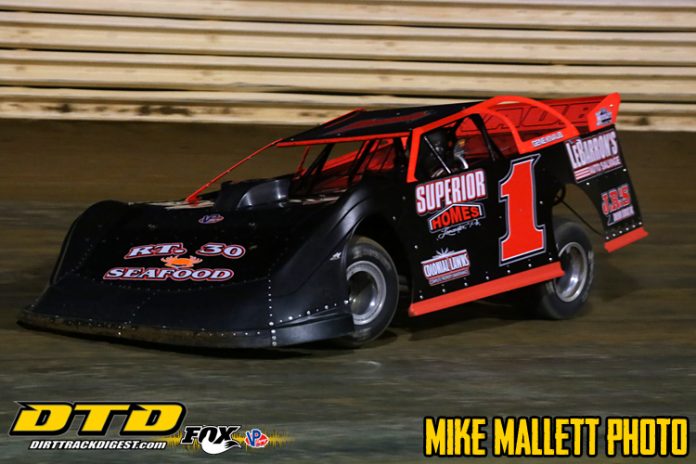 Kyle Reinhardt of Neptune City, N.J., wired the field in the 30-lap Firecracker 360 sprint car race and collected the $3,000 prize at the wheel of the Central Builders No. 1 entry.

The $3,000 victory was Reinhardt’s third of the season at Selinsgrove and second straight night in a row as he took the win Wednesday night in the United Racing Club feature at Port Royal.

Shaun Lawton of Bloomsburg scored his fourth straight win in the 15-lap pro stock race, while Jake Jones of Cogan Station won his third race of the year in the 12-lap roadrunner feature.


There will be no racing at the track this Saturday, July 6.

Kyle Reinhardt rocketed to the sprint car lead from the pole but the yellow flew when outside polesitter Cody Keller spun 360 degrees in the second turn and kept running giving him his starting position back.

On the restart, this time it was Blane Heimbach, from the second row, grabbing the lead when the caution flew again for Josh Weller.

By lap two Smith was up to third and Chad Layton raced into the top five.  As Reinhardt sliced through traffic Heimbach had trouble with Smith catching and briefly passing him.

Greg Jones brought out the red flag when he rolled his racer onto the side in the third turn.  Jones was uninjured.

Heimbach tried to slide under Reinhardt on the restart but Reinhardt held him off.  Layton also tested Smith for third and Ryan Kissinger roared into fifth.

By lap 20 Smith slid under Heimbach in the second turn only to have Heimbach return the favor in the fourth turn.  Once by, Smith started to fade and Layton took over third.

In the final laps Heimbach ran the cushion and closed on Reinhardt but could not get by him.  Reinhardt won by 2.176 seconds over Heimbach, Layton, Smith and Derek Locke.

Gene Knaub blasted to the lead to start the late model feature from the outside pole and was followed by Brett Schadel, Bryan Bernheisel, Mike Lupfer, and Dylan Yoder.

The caution flew on lap two when Kenny Trevitz, Nathan Long, and Jerry Bard got together in the third turn.

Using the Delaware double file restart, Knaub held the lead but a great battle between Schadel and Bernheisel developed, while Jeff Rine raced into the top five.

On lap 13 Yoder caught and passed Schadel.  The pair battled for a lap before Yoder took the spot permanently.

Yoder continued flying around the top and passed Bernheisel for second on lap 23 and started to chip into Knaub’s lead but even with the five additional laps Yoder was able to get to Knaub’s rear bumper but could not get around the leader trailing by .307 seconds at the checkered flag.

Schadel, Bernheisel and Rine rounded out the top five.

Late model heats were won by Schadel and Knaub.

Stroup shot around Bachman on lap three to take over the runner up position but Bachman kept the pressure on racing the inside.  Brad Mitch stopped on the backstretch on lap 11 slowing the field again.

Lawton pulled to a sizable lead after the restart winning for the fourth time in a row by 2.083 seconds over Stroup, Bachman, John Schoch and Rothfuss.

AJ Hoffman and Moser were victorious in the pro stock heats.

Cope got out of shape on the restart and Jones took the lead with Bussey on his tail.  Bussey dogged Jones the rest of the way but could not get by.  Lawton, Cope and Brian Mabus rounded out the top five.

Will Brunson and Bussey won the roadrunner heats.