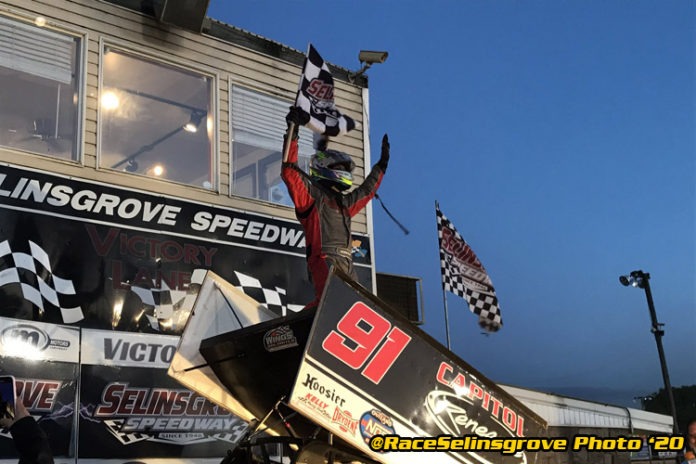 SELINSGROVE, Pa – Kyle Reinhardt of Hanover scored a convincing win in the Selinsgrove Speedway season opener for the Modern Heritage 410 sprint cars on Sunday night, taking $4,000 for the win after wrestling the lead away from Freddie Rahmer.

The 25-lap super sprint car main was filled with challenges for position and electrifying passes inside the top six.

Only two laps of the main were recorded before sixth runner TJ Stutts spun but kept going while the field darted toward and around him, bringing out a yellow flag.

Reinhardt challenged for control on the restart but Rahmer kept the led before a second and final caution flag unfurled with five laps away.

Reinhardt went to work on Rahmer when action resumed and took the lead going into the first corner only to see Rahmer fly back around him exiting the second turn.

But the long hauler who towed from Missouri on Saturday night to make it to Selinsgrove for Sunday refused to be denied and again took command back from Rahmer to the stripe to lead lap six.

Meanwhile, Wagner and Buckwalter waged war for third, exchanging the spot repeatedly, staging a high-speed game of chess as they darted inside and outside of one another every lap while also traversing the half-mile side by side at times.

Also waging war, exchanging the fifth spot repeatedly was Ryan Smith and Blane Heimbach, who repeatedly traded the spot before Smith finally got it on lap 12, also racing side by side numerous times.

At the halfway point, Reinhardt held a 2.8 second lead over Rahmer but Buckwalter was on the move and took over second with 10 laps to go.

Smith too was on the move, cruising around the inside of the oval and as the leaders motored through hectic traffic, he gut under Buckwalter for second with four laps to go.

The Kunkletown driver then went to work slicing into Reinhardt’s advantage, taking it from nearly four seconds down to 1.5 seconds at the finish.

Late in the race, both Heimbach and Layton surged forward to secure fourth and fifth.

Heats went to Reinhardt, Buckwalter and Smith. Fast time was set by Rahmer with a lap of 16.737 seconds.

Will Brunson led all 12 laps of the roadrunner main to close the night but after post race inspection the win was awarded to Curtis Lawton.