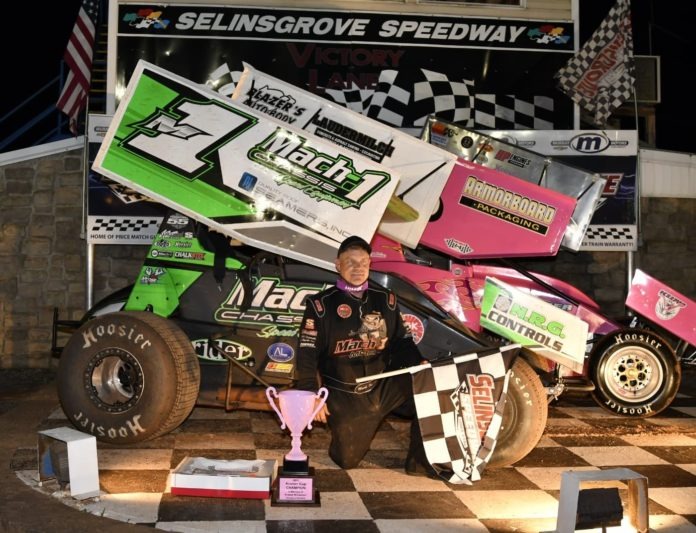 SELINSGROVE, PA – Mark Smith proved once again that he is one of, if not the top 360 driver in the country as he scored another win at Selinsgrove Speedway for the 7th annual Kramer Kup on Saturday, June 27th. The Kramer Kup is run annually honoring the life of Kramer Williamson who was tragically killed in a URC race in 2013 at Lincoln Speedway. This was Smith’s 5th career Kramer Kup.

Kramer Williamson made his way into full sprint car competition in 1971. He won his first feature in only his seventh time out at Susquehanna Speedway (now called, BAPS Motor Speedway). He was crowned Rookie of the year at Williams Grove, Port Royal and Susquehanna Speedway. Over ten years, Kramer drove for many drivers and visited victory lane at many different race tracks. He won championships at Williams Grove in 1976 and 1978, Selingrove in 1978, and was the champion of Jack Gunn’s KARS series in 1978; Kramer also won the William’s Grove National open that year as well. After recording 77 wins, Kramer moved to the URC 360 division in the mid-80’s where we would score another 67 career wins putting him third on the URC all-time win list. He won the URC points championship three times (1991, 1992, and 1995). Kramer was inducted into the National Sprint Car Hall of Fame in 2008. Tragically, Kramer lost his life after a racing accident at Lincoln Speedway in 2013. (Information provided by the National Sprint Car Hall of Fame and Museum Facebook page)

Nineteen cars invaded Selinsgrove Speedway to vie for the iconic pink trophy, and delicious cake, that has been awarded to the winner of the Kramer Kup for the last 7 years. Kramer Williamson’s family was also on hand and spoke very highly of Kramer, as well as what the race means to them before the action began. “We love coming to see all the Kramer gear, pink shirts, and hearing all the Kramer stories that everyone is sharing,” Felicia Williamson, Kramer’s daughter said, “the Kramer Kup race means so much to remember and honor my dad.”

As action got underway, it was the 2018 champion Josh Weller who went quick time in hot-laps with a lap of 17.398. Weller would only get faster as he captured his heat race win while recording the fastest time of the night at a 17.379. Heat races went off without a hitch and the field was set for the 30-lap main event.

Dallas Schott, URC rookie of the year contender out of Myerstown, PA redrew the pole position for the feature with Derek Locke to his outside. Schott darted out to the lead and seemed to be putting quite a bit of distance between himself and the veteran Mark Smith who settled into second. Schott will be one to watch this year as the youngster has already proven to show tons of speed within the first two races of the season. Unfortunately for the 55 machine the caution would fly on lap 11 for Ryan Stillwaggon who spun in turn four – almost tipping over.

With Schott back in his sights, the M1 of Mark Smith drove around Schott on lap 11 and would never look back. Smith smoothly went around lapped traffic as the battle now was for second on back. Locke, Jason Shultz, and Adam Carberry traded spots throughout the race as Schott began falling back. At the line for the 14th time this season in 360/410 competition, Mark Smith captured the win with Locke, Shultz, Carberry, and 2019 champion Chad Layton rounding out the top 5. “I was in no hurry” said Smith during his victory lane interview, “you need to have tires on your car by the end of the race, you just gotta keep ‘em close and make a move when you can.” When asked about Kramer during the celebration, Smith said “as a kid I just liked what he was doing, I always wanted to weld and do all that kind of stuff I kind of based myself off of him. And here we are doing the same thing as him.” Mark would like to thank all the guys on his crew, NGK Spark Plugs, Shelby Park Marketing, Mach 1 Chassis, CSI Shocks, Wilwood Brakes, Rider Racing Engines, NRG Controls, and Hoosier Tire for getting him to victory lane.
The KSE hard charger for Saturday night went to Davie Franek who started from the 15th position and worked his way to a tenth-place finish. Josh Weller and Derek Locke were credited with the two heat race wins.

The United Racing Club returns to action this Wednesday at Port Royal Speedway where we will join the 410’s during night 6 of the PA Sprint Speed Week, where you may see some 410 drivers pull double duty and compete with URC. Gates open at 4 p.m. and racing will kick off at 7 p.m. for a night that is sure to be full of excitement.