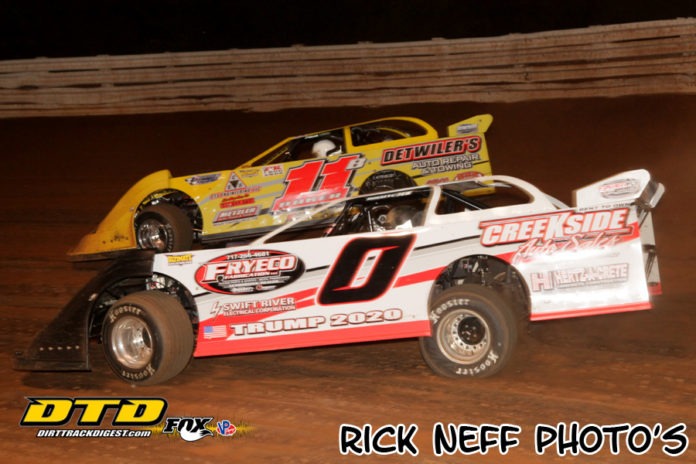 The series now moves to Williams Grove Speedway on Friday, August 21 when the super lates will compete in a World of Outlaws Late Models event paying $10,000 to the winner.

The race will award appearance points only toward the 2020 Civil War Series crown.

Eckert picked up $3,000 for his 30-lap Saturday win at Selinsgrove, overtaking Gregg Satterlee for the lead on lap 15.


A series winner at Selinsgrove on July 25, Andy Haus entered the race on Saturday just 40 points back of Rine in the title chase but a collision with the outside rail while running third with a few laps to go on Saturday has widened that gap.

The series champion will be crowned in the north, at Selinsgrove Speedway, on September 6 as the field takes part in a ULMS special paying $4,000 to win.

Modern Heritage of Mifflinburg, Pa., and RBS Auto & Trailer Sales of Eldersburg and McHenry, Md., have teamed to present the 2020 Civil War Series.

The inaugural series carries points for feature finishes that will award a premium to the champion at series’ end and contingency prizes for finishers second through fifth in points.

Teams will receive North vs. South Series appearance points only for the August 21 program at Williams Grove. All other series races will divvy out full feature points.

Since opening in late 2019, Modern Heritage has quickly become a region leader in kitchen and bathroom custom design work and installation, “Creating Beautiful and Timeless Spaces.”

Offering not only full design and installation services, Modern Heritage carries full lines of flooring and cabinetry for every customer’s needs at its showroom located at 321 East Chestnut Street in Mifflinburg, Pennsylvania.

RBS Auto and Trailer Sales offers a wide selection of trailers and haulers from 10 major manufacturers, featuring anything from car haulers to dump trailers and custom designed enclosed trailers.

RBS’ inventory has something to suit every hauling need with over 150 trailers and haulers in stock. RBS offers delivery and competitive financing.