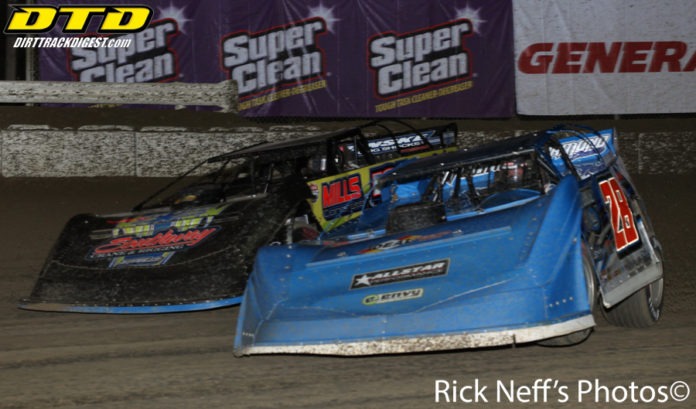 HARTFORD, OH – The 88th anniversary season at Sharon Speedway is set to begin this Friday (April 21) in one of the biggest ways ever. The Lucas Oil Late Model Dirt Series (LOLMDS) will make its inaugural appearance at the 3/8-mile clay oval. The Summit Racing Equipment Econo Mods will also be on the card with warm-ups slated to begin at 6:15 p.m. The event is presented by Barris Truck Service of West Middlesex, Pa. Barris Truck Service features medium and heavy duty truck repair and heavy duty towing.

The LOLMDS boasts a star-studded lineup of racers that will be in competition battling in the $10,000 to-win “Steel Valley 50” led by defending three-time Series champion and current point leader Scott Bloomquist, who has two victories this season. Four-time World of Outlaws champion, Josh Richards, who has moved over to the LOLMDS in 2017, trails Bloomquist by 120 points and has a pair of victories this season. Last year’s third place point man, Tim McCreadie, is third in points this year with a pair of victories as well including the most recent in Batesville, Arkansas.

While many of the above racers have not competed at Sharon, one driver that has is Lanigan, who won the last national Late Model race at Sharon back in 2010. The LOLMDS has three full-time racers with ties to the local area including 2016 rookie-of-the-year Colton Flinner along with Gregg Satterlee and “Boom” Briggs as the later two are competing for the 2017 rookie-of-the-year along with Don O’Neal son, Hudson. Briggs was victorious at Sharon in a 2013 ULMS-sanctioned event. Several local and regional talented Late Model racers will be on hand trying to dethrone some of the best Super Late Model racers in the world. For more information on Lucas Oil, check out their website at www.lucasdirt.com.


“We tried for five or six years to get a Lucas Oil event at Sharon, secured one last year, and it frustratingly rained out,” explained eighth year General Manager Dave Willoughby. “The response last year was very good and that excitement has carried over to the offseason as we’re really looking forward to hosting this event. Other than some events two hours or more away in Ohio, this will be the only local appearance the Series makes until October at Pittsburgh. Hopefully we get good weather and the fans support this event so it becomes an annual tradition.”

The Summit Racing Equipment Econo Mods will run a complete program racing for $500 to-win. Steve Haefke is coming off his first championship and brings with him an amazing streak of 17 straight top two finishes dating back to the 2015 season. The Austintown, Ohio driver will look to continue that streak in the region’s first Econo Mod race.

An open practice was held last Saturday, but Friday’s event will be the first on the new red clay, wider racing surface after 140 tri-axle loads of clay were brought in over the offseason,

Reserved tickets are on sale through Thursday night at midnight for $25 by going to www.sharonspeedway.com and clicking on ‘buy tickets’ at the top left of the page. Day of event general admission adult tickets are $25, while pit passes are $40. Children 13 and under are free for general admission. Pits open at 3 p.m. with the main grandstands opening at 4, while the east side gate will open at 5. Warm-ups begin at 6:15 followed by group qualifying for the LOLMDS and then heat race action.

The Barris Family has been heavily involved in racing over the years. Barris Supply was the presenting sponsor of the RUSH Late Models for several years. See Barris Supply for all your Cub Cadet needs. Barris Supply is located at 3500 Sharon Rd., West Middlesex, PA 16159. Contact them at 724-528-2560 or www.barrissupply.com.