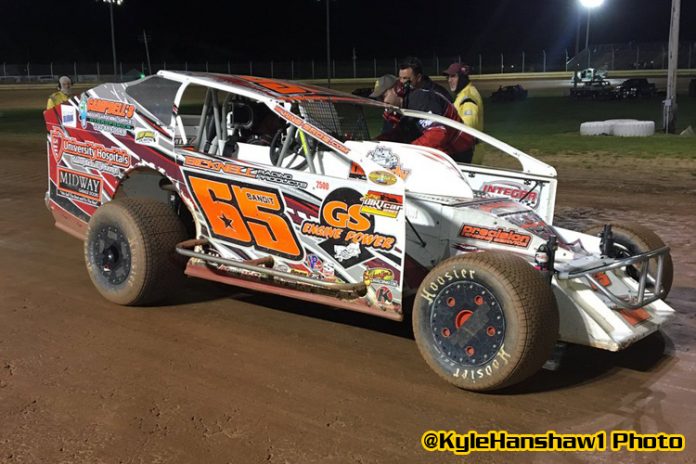 Jacob Hawkins made the long tow up from Fairmont, West Virginia pay off as he led wire-to-wire in the 25-lap Renegades of Dirt Modified make-up feature from the 2016 “Apple Festival Nationals”. Hawkins first ever Sharon win was worth $3,000 and came in a Rocket XR1 trial chassis for 2 Brothers Motorsports. Hawkins became the 52nd different driver to win an E-Mod race in the history at Sharon. Dan Davies was 2.604 seconds behind Hawkins in second. Ken Schrader was third as Carl McKinney, Joel Watson, Matt Lux, Jeff Johnson, Jeremy Double, Mike Kinney, and Casey Bowers rounded out the first 10.

In the regularly scheduled 25-lap E-Mod program, Joel Watson tracked down Matt Lux and made the winning pass with four laps to go. Watson pulled away over the final laps to win by 1.994 seconds over Lux. The win was the 27th of the 38-year-old Conneaut, Ohio driver’s career at Sharon and came in the Northwest Restoration/Zimmer’s Service Center/Close Racing Supply/955 Automotive-sponsored #92. Schrader was third for the second time of the night as Kinney, Davies, Josh Ferry, Shawn Shingledecker, Gary Eicher, Ken Zimmer, and Larry Kugel completed the top 10. Heat wins over the 20-car field went to Schrader and Kinney.

The Junior Sprints made their first appearance of the season and second ever as Jordan Simmons picked up the win. Luke Mulichak was second over Mike Lutz, Jr., who won the first ever event last September during the “Apple Festival Nationals”. Jaren Dye and Mason Canter were fourth and fifth.

Sharon Speedway will return to action with a “Saturday Night Live” program on Saturday, May 27 for Warren Diesel Performance Night featuring the Big-Block Modifieds, RUSH Sportsman Modifieds, Stock Cars, and Econo Mods. Power wheels races will be held for kids at intermission. Pits open at 4 p.m. with grandstands at 5 and racing at 7.