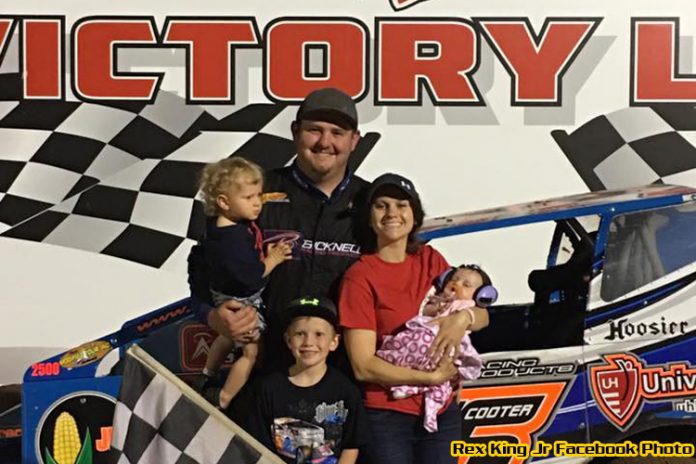 After an intense battle for the lead over the first 17 caution-free laps, a mistake by Peter Britten allowed Rex King, Jr. to get away from the Australian invader over the final eight laps to race on to his first win of the 2017 season on the Big-Block Modified circuit in the 25-lap Hovis Auto & Truck Supply feature.

“Those Australians are tough- I’ll tell you that right now,” expressed the 26-year-old Bristolville, Ohio winner. “He’s a good driver. I hit a hole and got into him, and that was my fault. He’s fun to race with. I think we’re going to have a fun time throughout the season. I just wish we could get some dry weather to get this track in shape. Sharon is doing all they can. They invested all the money, but it’s going to take some time. I have to thank all my crew, sponsors, and Sharon Speedway. I hope everyone has a good Memorial Day and remembers why we have the day off; it’s not for beer and parties, but for the ones we lost. Thank you veterans.”

King, Jr. shot from third into the lead over Britten and Dave Murdick on the opening lap. By lap three, the top three began to distance themselves from the field. Britten flew from the top side of the track diamonding turns three and four to get under King, Jr. racing off the bottom of turn four to lead lap six. Britten’s lead though was short-lived as King, Jr. would make what would turn out to be the winning pass on lap eight; albeit it without contact.


King, Jr. used the lapped cars of Bob Warren and Shawn Kozar to his advantage as he distanced himself from Britten on lap 10 opening up a half-straightaway lead as he caught traffic on lap 12. Britten reeled in King, Jr. and was right on the leader on lap 14 as the two would go at it again until the event’s only caution for a spin by Kozar with 17 laps completed.

Back under green, Britten tried a similar move as the one he did to take the lead, but would get sideways in turn four and dropped back to fifth. This allowed King, Jr. to go unchallenged over the final eight laps to win by a comfortable 3.180 second margin over fifth starting Murdick. King, Jr’s 21st career win came in the KMB Inc.-owned, King Bros. Ready Mix Concrete/King Sanitary/Russell King Racing/Jim Brown Seed Sales/University Hospitals/Cedar Steel/Bristol Disposal/Mahan Welding-sponsored #165.

Britten would pass Jim Weller, Jr. and Jim Rasey in the final laps to finish third driving his own #21A this week. Rasey and Weller were fourth and fifth. Last week’s winner, Rex King, was sixth over Chris Haines, Rick Regalski, Jr., Erik Martin, and Will Thomas III. Britten and Haines won the heat races over the 17-car field.

Andy Buckley and Paul Davis put on a battle for the lead in the 20-lap Gibson Insurance Agency Stock Car feature those in attendance won’t soon forget. The two traded the lead every lap over the final six laps with Buckley winning out for his first victory in the division at Sharon in 16 years on the old half-mile track! Buckley earned $700 due to the high car count.

“Sixteen years since I’ve been standing here in a Stock Car,” stated the 47-year-old Stoneboro, Pa. driver. “Old Paul- you know how many seconds I got to him last year. The track was a little bit challenging tonight and I thought ‘I’m going to drive it right through the middle where he did’. I’m just getting too old for this stuff. I was glad to see the yellows to catch my breath a little bit.”

Mike Clark and Davis led the field to green as the two have won the last four track championships. Davis took charge early on, while fourth starting Buckley moved into second on lap two. Clark got high on lap four and dropped back to sixth. Brian Carothers had raced from the 10th starting spot into third, but slowed to bring out the caution with six laps completed.

After dropping out of the top five, Clark made his way forward and followed Buckley as the two passed Davis for the top two spots on lap eight. Davis didn’t go away as he regained second from Clark on lap 14 before a caution for a slowing Jamie Maxwell. This would setup a battle for the lead that had the fans on their feet and cheering over the final six laps. The lead swung back and forth between Buckley and Davis six times at the start-finish line with Buckley leading the 20th and important final lap by just 0.224 of a second!

The win for Buckley in his Wolbert Welding/World of Wheels/JED Racing Engines/Slider Race Cars/Temple Portable Crushing/Marlow’s Campground/Wedge Motorsports/Robinson Automotive-sponsored #965 was his first ever in the division on the 3/8-mile track and just his second career in the division at Sharon. Buckley also has an E-Mod win on the 3/8-mile track. Andy Thompson also snuck by Davis on the final lap to earn second by just 0.011 of a second! Davis slipped to third over Clark and Don McGuire in his first start. Tim Deutsch was sixth in his season debut as Michael Hudzik, Hunter Exley, Jacob Billyk, and Mike Miller completed the top 10. Clark, Rusty Moore, and Davis won the heat races over the 25-car field.

The RUSH Sportsman Modifieds were finally able to complete their first event of the season on Saturday night as Rocky Kugel claimed the opening night honors over an all-time record 30-car field for the fourth-year division. Kugel took the lead on lap three and led the remainder of the way in the 20-lap HTMA/Precise Racing Products feature for his third win overall on the circuit, worth $500 due to the high car count.

“I’m tired,” said the 40-year-old East Liverpool, Ohio driver. “I was sawing on that wheel back and forth just hoping that it didn’t bounce me in the air and into the wall. Dave (Willoughby) has worked hard on this race track, and it’s hard to get it smooth as glass. The track and everyone here does a great job and I appreciate all you do. I’m undefeated this year; this is three wins in a row. This car is freaking awesome! I have to thank Chuck List. This guy put me in victory lane. I was running on used tires from last year. He came down and said ‘you aren’t running those are you, and I said yes I am’. My man right there went down and bought me two new tires. This was 10 minutes before we went out. We grooved and siped them and threw them on- it was like NASCAR down there!”

The opening lap saw a three-wide battle for the lead with third starting Anthony Gillespie winning out over Justin Shea and Kugel. A spin by Will Schaffer brought out the caution with two laps completed. Under caution, Shea exited with a flat tire handing second to Kugel. Back under green, Kugel took over the top spot from Gillespie on lap three.

By lap five, Kugel began to opening up some breathing room on Gillespie. On lap 10, sixth starting Brian Schaffer battled side-by-side with Gillespie, but Gillespie was able to maintain the runner-up spot. The event’s final caution was displayed when Jacob Jordan spun with 17 laps completed. Under caution, the front end of Gillespie’s car collapsed ending his fine run.

When racing resumed for the final time, Shayne Izzo was able to make the move on Brian Schaffer for second. Izzo though was unable to mount a serious challenge on Kugel as Kugel took his seventh career win by 0.788 of a second in his Classic Landscaping-sponsored #83x. Izzo’s runner-up was his career best finish in racing. Brian Schaffer, who won last year’s RUSH Weekly and Touring Series Championships, was third. Josh Deems was fourth over ninth starting Kole Holden. Completing the top 10 were Steve Slater, defending track champion Brandon Ritchey, Chelsie Kriegisch, Preston Cope, and Michael Kristyak. Holden, Kriegisch, and Deems won the heat races, while Kyle Martell won the last chance B main.

Defending champion Steve Haefke out-dueled last week’s first career winner, Zach Myers, with a last lap pass to win his season’s first in the 20-lap Summit Racing Equipment Econo Mod feature. Haefke became the third different winner of the season in as many races, and earned $400 due to the high car count.

“I wasn’t going to let him stuff me in the fence,” acknowledged the 51-year-old Austintown, Ohio driver after late-race contact on the frontstretch. “I fell back a little at the start and was thinking, ‘what are these guys doing’? They got away from me a little bit, and finally I just put it up top. Once I got by him I thought he’s not going to run me up high again so I took the bottom. It was a fun race. We were pretty good here last year, but we’re working on it this year. There’s good cars in this class.”

Haefke used the outside to take the lead from Tyler Frankenberry at the start; however, following a caution for debris, fifth starting Brandon Blackshear raced to the lead on lap two. Myers, who started sixth, made his way to third on lap three then passed Haefke for second on lap five. Haefke and Myers traded second on lap nine then again on lap 11.

Blackshear was out in front looking for his second win of the season, but got tangled up trying to put a lap on Wayne Daniels in turn four and spun with 14 laps completed. Blackshear would have to pit with a flat tire. In a similar battle as to Buckley and Davis in the Stocks, Myers and Haefke swapped the lead five times over the final six laps as the veteran Haefke would get the better of the battle with a winning slider in turns one and two on the final lap.

Haefke crossed the finish line 0.433 of a second ahead of Myers for his 10th career win in the division and 11th overall at the track. Haefke had entered the season with a streak of 17 straight top two finishes, but hadn’t been able to regain that magic until Saturday night in his Tub’s Automotive/Wedge Motorsports/Davenport Performance-sponsored #41. Frankberry was third. Fourteen-year-old Kevin Ruhlman made a successful first career Sharon start racing from the 11th starting spot to finish fourth and doing it with a GM 602 crate engine. Mark Titus was fifth. Blackshear, Brian Huchko, and Myers won the heat races over the 24-car field, which was the highest count since September 28, 2013.

Sharon Speedway will return to action with a “Saturday Night Live” program this Saturday night (June 3) featuring the Big-Block Modifieds, RUSH Sportsman Modifieds, Econo Mods, and Mini Stocks. Both the Econo Mods and Mini Stocks will also run their 2016 “Apple Festival Nationals” make-up features. The Stock Cars will have the night off. Pits open at 4 p.m. with grandstands at 5 and racing at 7.