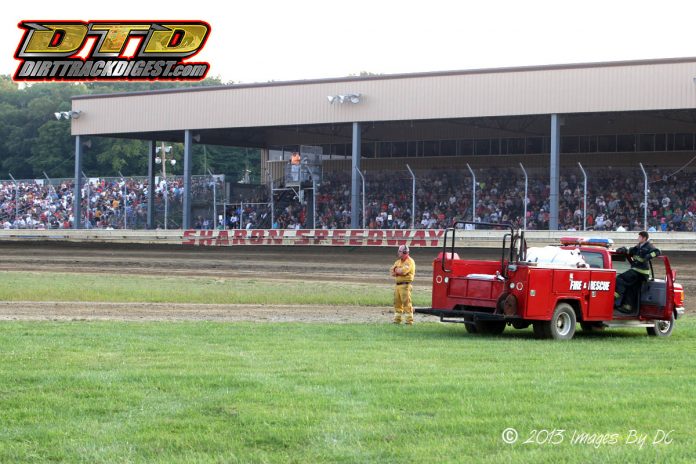 Defending track champion, Rex King, Jr. has surged into the early point lead in the Hovis Auto & Truck Big-Block Modifieds thanks to his first win of the season last Saturday night. The youngest of the King Family joined his father, Rex, who won opening night, and is in search of his third title in four years. After subbing for Jimmy Weller III on opening night, Peter Britten brought his own #21A to Sharon last Saturday night and ran a hard fought race with King, Jr. Standout drivers like Dave Murdick, Jim Weller, Jr., Jim Rasey, Garrett Krummert, and several others will look to end the Kings’ run and break into victory lane.

While not part of the regular “Steel Valley Thunder” program in 2017, the E-Mods will make their second appearance of the season. Back on May 20, Jacob Hawkins won the $3,000 make-up Renegades of Dirt feature, while Joel Watson captured the night’s regularly scheduled program for his 27th career win. The E-Mods will use 2017 Raceway 7 rules, which includes any 8″ tire.

The HTMA/Precise Racing Products RUSH Sportsman Modifieds were finally able to get in their first event of the 2017 season last Saturday night. A record field of 30 cars turned out for the fourth year division as Rocky Kugel took the top honors. Kugel has been fast out of the box this season also winning at Lernerville and Pittsburgh. With the high car count, all of the racers enjoyed an increase in payoff including $500 to-win plus all of the non-qualifiers also received a pit pass in addition to their tow money.

The Econo Mods brought a full field of 24 racers last Saturday night. That was the highest car count in over three years and also allowed the Summit Racing Equipment-sponsored division to run for their highest purse structure, which saw Steve Haefke earn the $400 top prize. After going 17 straight nights with top two feature finishes, Haefke struggled in the opening two events before returning to glory last week. May 20 winner, Zach Myers, has just a three-point lead on Haefke, the defending champion. The Econo Mods have had three winners in three events thus far this season. In addition to Saturday night’s regularly scheduled program, the Econo Mods will also run their $500 to-win “Apple Festival Nationals” make-up feature. The make-up feature field is set as no new cars will be permitted to run this feature.

The Mini Stocks will make their third attempt at racing this season. They were rained out on April 29 and May 6. The Mini Stocks will compete in a full show in addition to their 2016 “Apple Festival Nationals” feature paying $300 to-win that has been rained out three times. The make-up feature field is set as no new cars will be permitted to run this feature. Three-time track champion, Bill Fuchs, leads the all-time division’s win list at 28. In 2016, Steve Walker II won four feature events in route to his second track championship.

Pits open at 4 p.m. with grandstands at 5, drivers meeting at 6:30, and racing at 7. Grandstand admission is $10 for those 14 and over. Patio seating upgrades are just $5 and fan suite seating upgrades are just $20 over the cost of general admission. In order to reserve either of these ahead of time, call the office Monday through Thursday from 10 a.m. to 2 p.m. at 330-772-5481. As always, children under 13, parking, and camping is always FREE! Pit passes are $30. Sharon has a no carry-in cooler policy.

FREE “Fan Appreciation Night” along with driver autographs is coming up next Saturday, June 10 presented by Motorcraft/Quick Lane Racing. On Tuesday, June 20 Ohio Speedweek comes to Sharon featuring Tony Stewart’s Arctic Cat All Star Circuit of Champions Sprint Cars in a $5,000 to-win event along with the Mini Stocks. The “Lou Blaney Memorial” will take place on Saturday, July 8 with a return appearance by the All Star Sprint Cars along with the Big-Block Modifieds. On Thursday, July 20, the Super DIRTcar Big-Block Modified Series will be back for the second straight year in a $6,000 to-win event plus the Mini Stocks.