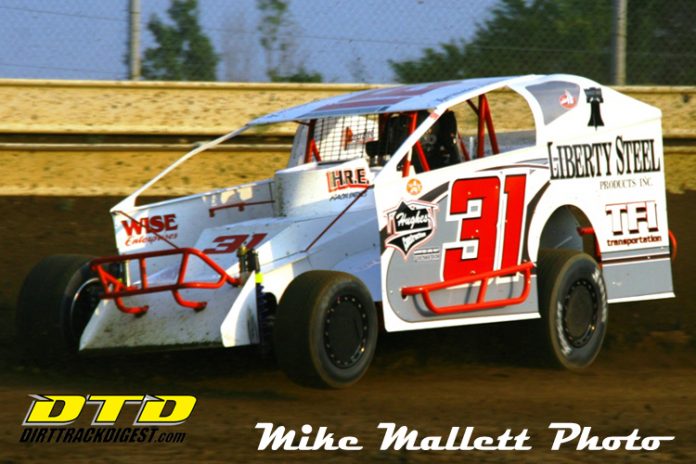 When Sharon Speedway went from a 1/2-mile to a 3/8-mile in 2002 it began a streak of three straight track championships for Carl McKinney in the E-Mod division. The 45-year-old Cranberry Township, Pa. driver would add a fourth track championship seven years later. In the ensuing years, feature wins would be few and far between. On Saturday night, sixth starting McKinney snuck past leader Jacob Eucker with six laps to go to score the 20-lap feature win for the first time in over three years; May 31, 2014 to be exact. McKinney’s 10th career win came in Mike Hendrickson’s #6M. Eucker was 1.698 seconds back in runner-up. Jeremy Double, Josh Ferry, Casey Bowers, Jeff Johnson, Joe Gabrielson, Jeff Hassay, and Jim Plance completed the starting field. McKinney also picked up the heat race win over the 11-car field.

After a sluggish start to the 2017 season, Steve Haefke is a on a roll. The 51-year-old Austintown, Ohio veteran swept the night in the Econo Mods winning both the 20-lap Summit Racing Equipment feature in addition to the $500 September 17, 2016 “Apple Festival Nationals” make-up feature for his third straight win! Haefke has now finished in the top two positions for 20 of the last 22 feature events dating back to 2015! Ironically, all three feature wins have come over May 20 winner, Zach Myers, and both of Saturday’s wins by a similar margins. Haefke’s Tub’s Automotive/Wedge Motorsports/Davenport Performance-sponsored #41 beat Myers by 0.827 of a second in the first feature and by 0.853 of a second in the second feature for his 12th career win in the division and 13th overall at Sharon. Oddly enough, Tyler Frankenberry has finished third behind Haefke and Myers for the last three features. Ryan Fraley recorded a fourth in feature one and a fifth in feature two driving for Haley Lapcevich. Heat wins over the 20-car field went to Myers and Brandon Blackshear.

The Mini Stocks made their first appearance of 2017 and it was no surprise that three-time champion Bill Fuchs and two-time champion Steve Walker II captured the feature wins. Both drivers reside in Greenville, Pa. Walker, the 2016 champion, nailed down the win in the night’s regularly scheduled 12-lap main event, while Fuchs picked up the $300 victory in the September 17, 2016 “Apple Festival Nationals” make-up feature that was rained out three different times. The win for Fuchs in his #10 was his all-time division-leading 29th of his career at Sharon, while Walker’s #4M captured his sixth career win since the division debuted in 2010. Pennsylvania State Trooper Tim Callahan finished runner-up to Walker, while Ricky Feely was second to Fuchs as both drivers recorded their best career finishes at Sharon. Heat wins over the 20-car field went to Walker and Feely.