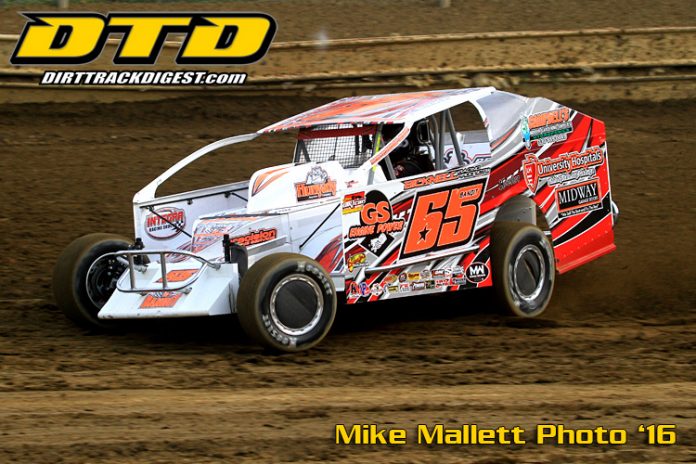 Rex King had gone winless for nearly two years. King’s last win at the Speedway came on July 25, 2015 before his opening night victory on May 20. On Saturday night, the Bristolville, Ohio veteran showed he’s back to his winning form dominating the non-stop 25-lap Hovis Auto & Truck Supply Big-Block Modified feature for his second victory in four races.

King started fourth and got by his son Rex King, Jr. and Bob Warren on the opening lap for second. King quickly caught Dave Murdick and was all over the leader. By lap three, Murdick and King began to pull away. King pulled alongside Murdick and made the winning move on the bottom of turns one and two on lap five, while Jim Weller, Jr. dropped Warren back to fifth.

King pulled away from Murdick on lap seven, while King, Jr. began to pressure Murdick for the runner-up spot. After a long battle, King, Jr. drove around Murdick in turn four to take the spot on the 13th circuit. By the time King, Jr. made the pass, his father had more than a straightaway lead built up. The younger King would get no closer to his father, who captured his 53rd career win in the #65 by 5.878 seconds.

Defending track champion Paul Davis out-dueled regional Stock Car standout Chris Schneider for his first win of 2017 to continue to stay atop the points standings. Davis became the season’s third different winner in as many races in the Gibson Insurance Agency-sponsored division.

“This is my kind of race track,” acknowledged the 56-year-old Fowler, Ohio winner. “I was glad to see it slick over. Two weeks ago it was a bit challenging, but it was fast and put on a good show for the crowd. This time I came out on top. I figured as long as I stayed on the bottom and kept those guys on the outside they would have to work a little harder. I usually make a living on the outside, but I can run the bottom.”

After an invert zero from the heat races, Schneider and Davis led the 26-car starting to green with Schneider leading the opening lap. Following an opening lap caution, Davis made the outside work on the double file restart to take charge. The event got off to slow start with five cautions in the first six laps; however, the final 14 would go green-to-checkered.

Schneider stayed within striking distance of Davis throughout the event and tried different lines. It appeared in the closing laps in lapped traffic, Schneider may have a shot to challenge Davis, but Davis was too strong as his Ocala Restaurant Supply/Hoover Racing/Tub’s Automotive-sponsored #3 took the checkered flag by 0.811 of a second over Schneider. Davis’ $700 victory was the 22nd of his career in the Stocks at Sharon and 25th overall at the Speedway.

Last season on May 28, Kole Holden won his first career feature at Sharon. Holden though was shutout of victory lane at the Speedway for over a year until winning week. On Saturday night, Holden made it two straight in the RUSH Sportsman Modifieds winning the 20-lap HTMA/Precise Racing Products feature from the seventh starting spot after a late race pass of Kyle Martell.

“We had to adjust to the track a lot today,” explained the 19-year-old Tiona, Pa. driver. “I think we got the right setup and hooked up to the traction on the bottom and got up through the pack. When it’s smooth and shiny like this, it really gets slicked off. This left side is all wrinkled up and that’s from last night, but we got it back to together and running good today.”

Martell, who won Friday night’s RUSH Touring Series feature at Thunder Mountain Speedway, was looking for his second win in as many nights as he shot from the third starting spot into the lead on the opening lap over Chelsie Kriegisch, Steve Slater, and Holden. On lap two, Holden passed Slater for third then slipped under Kriegisch to take second following a restart on lap three.

Ninth starting Brian Schaffer was on the move as he found traction on the top side of the speedway passing Slater for fourth on lap four and Kriegisch for third one lap later. Schaffer looked like he may have a shot to contend, but a caution for a spin by rookie David Kalb, Jr. killed his momentum and forced him to restart on the inside. Back under green, Chas Wolbert, Kriegisch, and Slater all got by for positions three through five.

The man now on the move was eighth starting Wolbert as he had followed Schaffer’s outside line. Wolbert would pass Holden for second on lap 11, but lose the spot one lap later following a restart. That restart would prove key for Holden as the final nine laps went caution-free. After regaining second, Holden went after Martell and was all over the leader on lap 14. Holden made the $500 winning move on lap 15 driving under the leader in turn four. The two ran side-by-side on lap 16 before Holden got away and took the checkered flay by 1.646 seconds in the Dana Holden-owned, D&D Oil/DAH Oil/Russ King Racing/Baker Motorsports/Dave Lyon Racing-sponsored #2.

Wolbert was third over Slater and Schaffer. Pole-sitter Kriegisch dropped to sixth. Anthony Gillespie came back from an early spin to finish seventh. Jessica Kriegisch, Jeremy Weaver, and Shayne Izzo completed the top 10. Heat winners over the 26-car field were Schaffer, Wolbert, and Holden.

After struggles in the opening two events that ended his run of 17 consecutive top two finishes dating back to 2015, Steve Haefke has returned to form in the Econo Mods. Haefke came out on top of a wild late race scramble with Zach Myers and Brandon Blackshear for the win in the 20-lap Summit Racing Equipment feature for his fourth consecutive victory! Haefke has now finished in the top two for 21 of the last 23 features!

“I seen a black nose shoot under me and thought ok I’m going to have to give these guys room or were all three going to be wadded up over here,” revealed the 51-year-old Austintown, Ohio resident. “I didn’t know what the outcome was going to be after that. I knew it was slick up there and just kept telling myself to keep this thing under me, and it worked out. Nice and easy on the throttle, nice and easy off to keep the car underneath you, and hey it worked out!”

Oddly the race featured three different drivers that spun out of the lead. First it was Brian Huchko, who led the first two laps then George Vestal IV, who inherited the lead. Sixth starting Myers and 12th starting Haefke went three-wide with Kyle Miller, who had inherited the lead, to take the top two spots on lap three. Seventh starting Blackshear passed Miller for third on lap four.

After getting a poor restart on lap 18 that temporarily saw him fall to third, Myers tried a move in turn one to get back by Blackshear and Haefke, but looped his ride. Haefke inherited the lead and pulled away from Blackshear over the final three laps to win by 2.014 in his Tub’s Automotive/Wedge Motorsports/Davenport Performance/O’Reilly Auto Parts-sponsored #41. The victory was Haefke’s 12th of his career in the Econo Mods tying him for second on the all-time win list with Jeremy Double, and his 13th win overall at Sharon.

After spinning with three laps to go, Myers came all the way back to finish third getting by Jace Ferringer on lap 19. Ferringer and Miller were fourth and fifth. Blackshear and Myers won the heat races over the 19-car field.

Sharon Speedway will be off this Saturday night (June 17), but will return to action on Tuesday, June 20 for Ohio Speedweek featuring Tony Stewart’s Arctic Car All Star Circuit of Champions for $5,000 to-win plus Mini Stocks for $300 to-win. Pits open at 3 p.m. with grandstands at 4 and racing at 7.