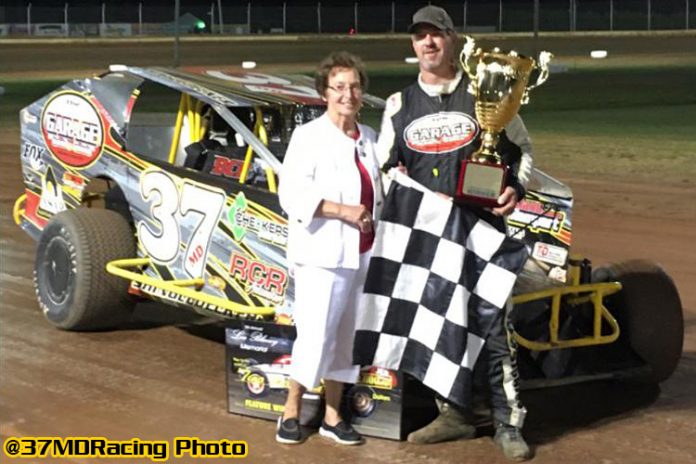 HARTFORD, OH – Sharon Speedway hosted the ninth annual “Lou Blaney Memorial” presented by Ollie’s Bargain Outlet on Saturday night. A huge crowd watched as Christopher Bell-Arctic Cat All Star Circuit of Champions Sprint Cars and Jeremiah Shingledecker-Hovis Auto & Truck Supply Big-Block Modifieds captured victories. The event celebrated the life and accomplishments of the hall of fame driver, who won more than 600 feature victories during a five-decade career. Blaney passed away in 2009 after battling Alzheimer’s. Many thousands of dollars were raised and donated to the Alzheimer’s Association.

Christopher Bell became the ninth different “Lou Blaney Memorial” Sprint Car winner in as many events with a stellar performance riding the rim and lapping up to ninth place for the $5,000 victory in what was the 100th All Star Circuit of Champions event in the history at Sharon. The impressive week for Bell saw him win a pair of USAC National Midget Car events in Illinois, capture the NASCAR Camping World Truck Series event win on Thursday night in Kentucky, and followed it up with his second career All Star victory on Saturday night.

“It was really tough- the track was really technical up on the wall,” explained the 22-year-old Norman, Oklahoma racer. “It was pretty easy to screw up and crash- I’m glad I didn’t do that. Some of the lapped cars were going good around the top and as soon as I got to them they dropped down and I was already committed so it was tough. I was glad I got a lead built up because I screwed up a lot and no one was able to show me a nose. Thank you guys for coming out. It’s a pleasure to drive in front of a crowd. You guys are the reason why we’re here. It’s honor to win this- Dave and Dale (Blaney) are great drivers and great guys. I’m really thankful to be able to drive the cars I do. I get in great equipment. This Sprint Car win means a lot. The Sprints have been the downfall of my career so far so I want to prove to all of the fans out there that I can be a great Sprint Car driver too.”

Bell instantly flew into the lead from his outside pole position starting spot after winning the second dash event. Pole-sitter Caleb Armstrong settled into second over Joey Saldana, who got by point leader Chad Kemenah for third on the opening lap. A caution for third generation racer, Sye Lynch, who was making his first career Sharon start, slowed action with two laps completed just as Saldana had passed Armstrong for second. When racing resumed, Saldana performed a slider in turns one and two to claim second.


Sixth starting Dean Jacobs, who rebounded nicely after timing just 30th fastest, passed Kemenah for fourth on lap four and one lap later brought Kemenah with him past Armstrong for third and fourth respectively. Bell had a straightaway lead over Saldana when he caught lapped traffic on lap seven; meanwhile, Kemenah reclaimed third on lap eight from Jacobs. By lap 12, Saldana began to close the deficit cutting the lead to a half-straightaway in lapped traffic.

Tim Shaffer started ninth and worked his way forward getting by Jacobs and Armstrong to move into fourth on lap 21 before the event’s final caution was displayed for a spin by Brent Matus. With lapped cars moved to the tail, Bell’s lead was totally erased and put Saldana on the leader’s tail for the first time of the event. Saldana tested the bottom in turns one and two and then again in turn four, but Bell maintained the lead. Over the course of the final nine laps, Saldana stayed within striking distance of Bell. He’d get a last chance in the final laps as Bell maneuvered through lapped traffic, but Bell was too strong taking his first career Sharon win by 1.036 seconds in the Ed Neumeister-owned, Dough-Si-Dough/Linder’s Speed Equipment-sponsored #11N.

Fresh off his 72nd career All Star win one week ago at Wayne County Speedway in his debut in the Indy Parts #71, Saldana was a solid second in his first Sharon appearance since a 2008 World of Outlaws event. “There was a little bit on the exit of four and I probably should have waited until the end instead of trying to do it on the restart,” revealed the Brownsburg, Indiana star. “That’s the way it is though. Bell is pretty good. I think we see that every week- he’s winning something. To run second to him is not a bad night. We’ll regroup and hopefully Bernie (Stuebgen) and me will have a good shot at racing these things. I really enjoy racing with the All Stars, and I really enjoyed racing here. This is an awesome track. I haven’t been here in awhile and it was fun to race on. I just needed a little bit more. I don’t think it was the car; I just had to do it driving. This is where I grew up racing with the All Stars and Bert Emick. I love it and hopefully I can continue to do it for awhile.”

Kemenah was third as he recorded his ninth podium finish since June 2 and 12th of the season as he closes in on his sixth Series title. Shaffer was fourth. Lee Jacobs, who always has speed at Sharon, came from 11th to fifth. Last year’s “Lou Blaney Memorial” winner, Danny Holtgraver, was sixth. Armstrong and Jacobs faded late to seventh and eighth respectively. Dave Blaney was ninth over Justin Barger from 19th.

Local racer, A.J. Flick, set fast time in qualifying with a lap 13.619 over the 45-car field, which was a record high count for the “Lou Blaney Memorial”. Heat winners were Bell, Holtgraver, Shaffer, and Saldana. Hunter Mackison and Max Stambaugh won the C and B mains respectively. Armstrong and Bell won the twin dashes to earn front row feature starting spots.

Making his season debut, Jeremiah Shingledecker ended a near four-year winless drought at Sharon after a wire-to-wire win in the 30-lap Hovis Auto & Truck Supply Big-Block Modified feature. Shingledecker earned $2,000 as he became the eighth different “Lou Blaney Memorial” winner in nine events on the Modified side as only last year’s winner, Jim Rasey, has been able to repeat amongst both divisions.

“Unfortunately our luck hasn’t been real good here so hopefully we turned it around,” stated the 40-year-old Polk, Pa. driver. “This reminds me of the old Tri-City (Speedway) surface. It’s a really nice surface. You guys have done a really great job with it. We went from silty sand and single file racing to this. We’ve been trying to get the car a little bit better and we were edging on this since last year. I really have to thank my dad. He spends a lot of time on these engines. I’d like to thank the Blaney Family and all of Sharon for putting this race on. It’s a very good race. When I first started racing I looked up to Lou Blaney and got to race with him a few years before he got out of the Modifieds.”

Shingledecker took off in the lead after an invert four from the heat races over point leader Dave Murdick, Kevin Bolland, Rasey, and Jim Weller, Jr. Murdick clipped an infield tire on lap two and spun to bring out the caution. After a caution for a spin by rookie Modified racer, Colton Walters, Weller got by Rasey for third on the lap five.

Shingledecker began to pull away by lap 10 and two laps later was in lapped traffic; meanwhile, the battle for third was hot and heavy between Weller, Bolland, and eighth starting Rex King, Jr. On lap 15, it was three-wide for the spot as Rasey spun in turn three. This moved King, Jr. to fourth for the restart, but it was short-lived as two laps later ninth starting Brian Swartzlander made the pass.

King, Jr. didn’t go away as he got on the top and it was three-wide again for third this time with King, Jr. prevailing over Swartzlander and Weller. Shingledecker had pulled away from Bolland, who sat fairly comfortable ahead of the continual battle for third, before a spin by Murdick with 27 laps completed halted action for the final time.

Bolland was unable to make the pass on the double-file restart, as Shingledecker maintained his lead over the final three laps and went on for his third career Sharon win, but first since September 13, 2013, by 0.560 of a second in his Garage Bar & Grill/RCR Auto-sponsored #37MD.

Like Shingledecker, Bolland also made his Sharon season debut a successful one earning $1,200 for the runner-up spot in just his second race of 2017. Swartzlander completed the podium also in his 2017 Sharon debut, and earned $900. Rex King came all the way from 13th to get by his son, Rex Jr., for fourth on lap 29. King, Jr. dropped to fifth, but did take over the point lead.

Steve Feder was another driving making his first 2017 Sharon start and was sixth. Rasey came all the way back from his lap 15 spin to finish seventh. Weller dropped to eighth over Will Thomas III and Garrett Krummert. Rasey, Bolland, Murdick, and Shingledecker won the heat races over the season-high 32-car field. Skip Moore won the B main.

Sharon Speedway will be closed this Saturday night, July 15 due to the Trumbull County Fair. Action returns on Thursday, July 20 for the Super DIRTcar Series for the Big-Block Modifieds in the “Buckeye Ground-Pounder 100” paying $6,000 to-win plus Mini Stocks for $300.