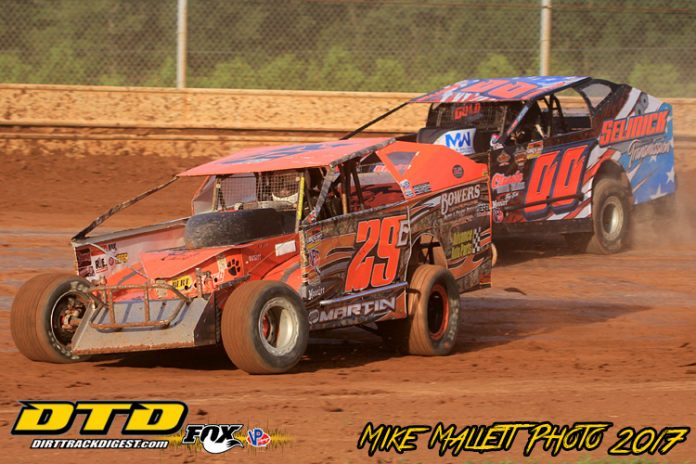 The Penn-Ohio Pro Stock Championship Series has been rained out twice this year so Saturday night will be take #3. They will not only compete in an entire program for $1,000 to-win, but also their $2,000 to-win 2016 “Apple Festival Nationals” make-up feature that has been rained out several times. A big field of 50 Stocks were on hand back on May 13 for the Penn-Ohio event before the rains came and washed out the program. They were rained out again last Saturday night. Rusty Martz is the current Penn-Ohio point leader over Rusty Moore, Randy Wyant, William Hurrelbrink, and Brian Rhed.

Defending track champion, Paul Davis, kick started his season at the last event for the Gibson Insurance Agency Stock Cars on June 10 taking the victory and point lead. Chris McGuire and Andy Buckley have also been victorious this season in the only other events completed for the Stocks.

The headlining Hovis Auto & Truck Supply Big-Block Modifieds have led the way at Sharon this year completing six events. The most two recent ones were special events where Peter Britten topped a 38-car field on July 20 for his first career Super DIRTcar Series win worth $6,000, and Jeremiah Shingledecker ended a long winless drought taking the $2,000 “Lou Blaney Memorial” win back on July 8. The only repeat winner at Sharon this year is veteran Rex King, who won on May 20 and June 10. His son Rex, Jr. captured the May 27 event win, and has a 13-point lead on Jim Weller, Jr., who won the other event on June 3.


Like the Stocks, the RUSH Sportsman Modifieds have amazingly only completed three events to date this season. Kole Holden has won the last two races to take over the HTMA/Precise Racing Products point lead by 16 over Shayne Izzo, a newcomer to Sharon in 2017. The Tiona, Pa. driver was RUSH’s 2015 “Futures Cup” Champion. Holden also sits atop RUSH’s Weekly Series Championship points throughout the region, which pays $3,000 to-win. Rocky Kugel won the opening Sharon race this season and is coming off recent wins at Lernerville and Expo Speedways.

After a slow start in the first two Econo Mod events which ended his run of 17 straight top two finishes, Steve Haefke has been on a roll. The veteran Austintown, Ohio driver has won the last four events including the 2016 “Apple Festival Nationals” make-up non-point feature. Despite his success, one-time winner, Zach Myers, trails Haefke by only one-point. Myers will have an opportunity to take over the point lead as Haefke will have his work cut out starting last in the feature due to his three straight wins in weekly competition. Brandon Blackshear, Mike Hillman, and Kyle Miller are third through fifth in the Summit Racing Equipment points.

BREAKING NEWS: The August 12 “410” Sprint Car event will now be the Simon Yoder Memorial and will pay $3,000 to-win, $250 to-start! There will also be a dash for cash. Thanks to the following contributors: Jim Miller, Good Tire Service, BLR Trucking, Deems Logging, Bill Altman, Palmer Pools, Interstate Fabrication, Jake Yoder, and Nathan Exley. Yoder was a huge Sprint Car fan, who passed away from cancer.