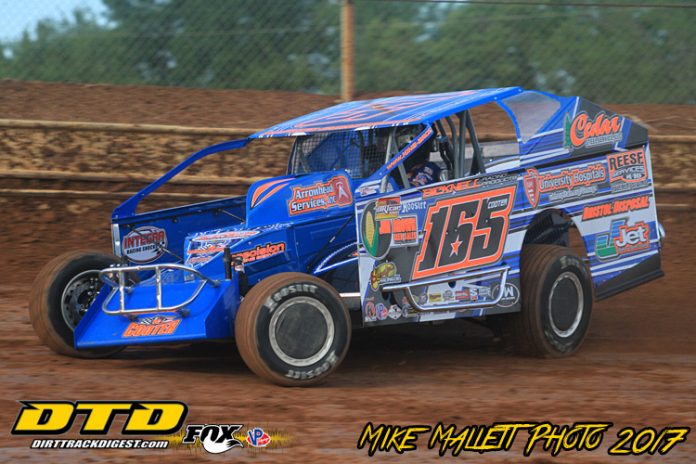 Defending track champion, Rex King, Jr., took the lead on lap nine and drove off to the 25-lap Hovis Auto & Truck Supply Big-Block Modified feature win. With the win, King, Jr. matched his father with his second victory of the season- tied for tops in the division, and took one step closer to his third title in four years with just one month of point racing remaining.

“When I race against (Garrett) Krummert, (Dave) Murdick, and my dad it’s really great- they are good guys to race with,” stated the 26-year-old Bristolville, Ohio driver. “I have to thank Sharon Speedway- it’s a great facility and was a good race track tonight. I have to thank my sponsors, also everyone on my end for donating to Guy Griffin. Guy is a hell of a person and we hope the best for him.”

Pole-sitter Garrett Krummert was making his first Sharon start in a new car and raced to the early lead over Dave Murdick, King, Jr., Jim Weller, Jr., and Will Thomas III. King, Jr. drove around Murdick on lap three for second and quickly closed on the leader. While Krummert was pounding the top, King, Jr. was making traction on the bottom pulling even on laps five, seven, and nine. The winning pass came on lap nine when King, Jr. got enough of a run on the bottom in turn three to perform the slide job in turn four. Krummert though didn’t go away as he stayed with King, Jr. and actually got alongside the leader on lap 11, but King, Jr. was able to maintain the lead until the event’s first and only caution for Colton Walters, who stopped with 12 laps scored.


The second half of the event belonged to King, Jr., who cruised around the top side of the red clay to a convincing victory by 3.128 seconds in the #165 for his 22nd career win. Krummert fended off a late charge by Weller, Jr. to hold on for second. Jim Rasey had an excellent run finishing fourth after starting 13th. Murdick dropped to fifth. Completing the top 10 were Rick Richner, Thomas, Justin Rasey, Erik Martin, and Rod Laskey. King, Jr. and Thomas won the heat races.

Making his first appearance in a Stock Car at the track, Andrew Gordon came out on top of an excellent battle with Chris McGuire to score the apparent win the Penn-Ohio Championship Series event; however, was disqualified in post-race tech for illegal suspension. McGuire, 26 of Erie, Pa., was thus awarded the $1,000 victory- his second of the season at Sharon.

McGuire took off in the lead, while fourth starting Gordon made his way to third after the opening lap. Gordon passed Rusty Martz then for second on lap three. One lap later, Gordon closed in on McGuire as the top two began to pull away. An excellent battle took place as the leaders encountered lapped traffic on lap 10. A caution for a William Hurrelbrink spin on lap 14 was the first of four cautions before another lap was completed.

Back under green, McGuire and Gordon raced side-by-side for the lead on laps 16-20 with Gordon nosing ahead to lead lap 18. Three cautions bunched up the field in the final four laps. Under caution, Chris Schneider had to exit with a flat tire after racing from 12th to third. Gordon would cross the finish line ahead of McGuire’s Welders Supply/Tobber Racing/H&K Donuts/Beacon Lubricants/Genesis Shocks/Lincoln Electric/Erie Bass-sponsored #63 by 1.619 seconds before the disqualification.

In the race of the night, Chris Schneider came out on top of the tremendous 25-lap Penn-Ohio Pro Stock 2016 “Apple Festival Nationals” make-up feature event. Schneider charged from the 11th starting spot to take the lead from Andy Buckley with six laps to go in the non-stop event timed in 8:49.382. The $2,000 victory was Schneider’s first of the season.

“This was impressive; I have to thank these guys for such a nice race track, the guys for racing clean- that was beautiful I wish we could always do that,” stated the 38-year-old Lower Burrell, Pa. driver. “I have a lot of experience on this red clay. It’s very similar to what Lernerville (Speedway) has. It’s tricky. You have to learn where to go, where the grip is, and where it’s not. It can be slippery as can be and really bitey, and as you can see I have mud on the front of my car. It’s been a rough year. I rolled a car here, we had a motor issue, and there’s been a lot of rain outs. I feel bad for these tracks- they have such good facilities and the weather just hasn’t cooperated, but this was the one I wanted to win.”

Track regulars Brian Carothers and Buckley led the 26-car starting field to green. Carothers would lead the opening lap, but Buckley took charge on lap two. Fourth starting Randy Wyant passed Carothers for second on lap four with Rusty Moore following in fourth one lap later. Wyant began to close in on Buckley on lap eight and was right on the leader on lap 10.

Schneider became a contender on lap 15 when he took over third from Moore. By lap 17, it was a four-car race for the lead with Buckley trying to fend off Wyant as Schneider and Moore joined the battle. Schneider drove around Wyant for second on lap 18 and then made the winning move from Buckley on lap 19. Buckley would fade out of the top five in the final laps as Wyant got by for second on lap 21.

Schneider though was too strong for Wyant as his SS Chassis & Supply #55 captured his sixth career win by 0.813 of a second. 10th starting Davis made a late charge to finish third for the second time of the night after getting by Buckley on lap 22. Moore was fourth. After going 22nd to 10th in the first feature, Steve D’Apolito had a great run in the second feature racing from 12th to fifth without a caution utilizing a GM 604 crate engine. Jackson Humanic was sixth. Buckley dropped to seventh over Bobby Whitling, McGuire from 26th and Curt J. Bish.

Chas Wolbert led all 20 laps of the RUSH Sportsman Modified feature, but the victory was far from easy as he had to fend off serious challenges and five double file restarts from Rocky Kugel for most of the race and a late charge by Josh Deems. Wolbert’s first win of the season and second on the RUSH circuit came in the HTMA/Precise Racing Products-sponsored event.

“I was getting nervous but this Bicknell by RKR was just awesome tonight and really protected the bottom well, explained the 22-year-old Warren, Ohio driver.” “I saw Josh Deems and Brandon Ritchey sneak in on the bottom a few times- it was fun. This new surface is great. I’m glad after almost two months we’ve been able to come back and run. First off I have to thank God because without him none of us would be here. I want to give this one to my wife and son. He’s two months old and she’s really been hanging in there letting me go racing. I also want to thank my dad for helping me tonight along with my buddy Kyle, who couldn’t be here, and all of my sponsors.”

Pole-sitter Wolbert raced out to the lead as the green waved. A wild scramble behind Wolbert saw Kugel go from fifth to second over Tiffany Williams and Brandon Ritchey on the opening lap. Ritchey would then get by Williams for third on lap two. Over the ensuing laps, Ritchey had his hands full in the battle for third with seventh starting Shayne Izzo and 12th starting Kole Holden.

Three cautions slowed action between laps 9-11. Deems, who started eighth, had the bottom working as he moved into the top five on lap 10 getting by Chelsie Kriegisch and Holden. Deems passed Izzo for fourth on lap 12 and one lap later stole third from Ritchey. A caution for a Don Blaney spin with four laps to go set up one more restart.

Back under green, Deems passed Kugel for second. Deems closed on Wolbert, but would run out of time as Wolbert garnered his third career Sharon win by 0.304 of a second in his C.T. Wolbert Trucking/Russ King Racing/Ohio Intra Express/Kings Ready Mix Concrete/Crooked Pine Woodworking/955 Automotive/Kings Sanitary-sponsored #c3. Kugel, Kriegisch, and Ritchey were third through fifth. Kugel, Anthony Gillespie, and Holden won the heat races over the 22-car field.

Despite having to start last due to winning three straight regular feature events, Steve Haefke charged through the field and made a last lap winning pass of Brandon Blackshear to score his fifth straight victory in the Summit Racing Equipment Econo Mods! Haefke has now finished in the top two for 22 of the last 24 features dating back to 2015!

“I needed that caution because I didn’t know where we were at as I was too busy watching cars and didn’t have time to look at the scoreboard to keep this thing underneath me,” revealed the 51-year-old Austintown, Ohio racer. “I didn’t drive it in any harder that last lap. It just stuck and we kind of bumped. It wasn’t intentional, but he wasn’t going to give me any room either, and I don’t blame him because I wouldn’t have either. That was great racing for the fans. Bring your family and friends next week and lets fill this place up- you see some good racing here.”

Blackshear started second and took the lead on the opening lap from pole-sitter Ty Rhoades. Eric Wilson was making his first start of the season and drove under Rhoades for second on lap two. By the time Wilson got to second, Blackshear had opened up a near straightaway lead. The event’s only caution was a much needed one for Haefke and came with 13 laps completed when Wayne Daniels got into Haley Lapcevich sending her spinning.

Haefke, who started 19th, was up to fifth and then had a great restart making his way to third on lap 14. Haefke caught Wilson and made the pass for second on lap 17. Haefke then ran down the leader Blackshear and dove to the inside in turn one. The two made contact with Haefke coming out on top and went on to lead the final lap by 0.676 of a second over Blackshear. The victory was Haefke’s 14th of his career in the Econo Mods moving him into sole possession of second place on the all-time win list, and his 15th win overall at Sharon. Wilson, Rhoades, and Kyle Miller were third through fifth. Rhoades and Blackshear won the heat races over the 20-car field.

Next Saturday night, August 5 is the “Bill Kirila Memorial” featuring the Big-Block Modifieds, E-Mods for $1,000 to-win presented by A&MP Electric, RUSH Sportsman Modifieds, and Econo Mods. The RUSH Sportsman Modifieds will also run their $800 to-win 2016 “Apple Festival Nationals” make-up feature. The Stock Cars have the night off. Pits open at 4 p.m. with grandstands at 5 and racing at 7. Adult admission is $10 and pit passes are $30.