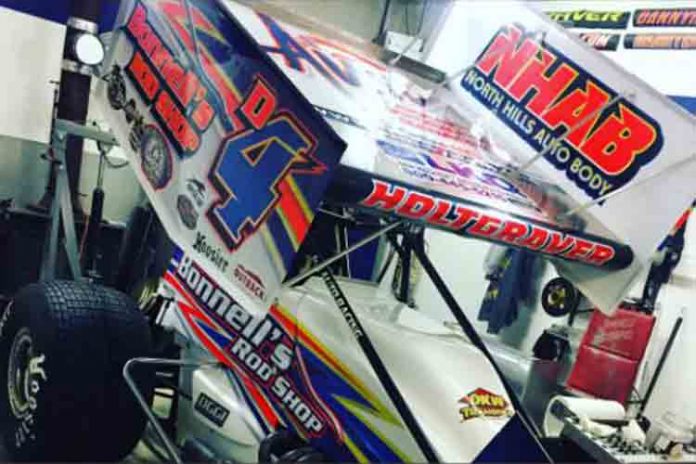 The 2017 season has been a change of pace for Danny Holtgraver. For probably the first time in his 22-year racing career, Holtgraver hasn’t been competing full-time after coming off the road with Tony Stewart’s All Star Circuit of Champions Sprint Cars. Holtgraver returned to his family-owned #D4 for a limited schedule of events this season. Last Saturday night, the 27-year-old Butler, Pa. driver won his first race of 2017 in the $3,000 “Putzy Kekich Memorial” at Mercer Raceway Park. On Saturday night, Holtgraver returned to his former weekly Saturday night home and swept the night winning his heat, dash, and the 30-lap “410” Sprint Car feature earning $3,150 in the “Simon Yoder Memorial”. It was a sterling performance by Holtgraver lapping up to the third place car!

Holtgraver earned the pole position after winning the $150 dash and immediately raced to the early lead over Dan Kuriger. The event’s only stoppage came after a three-car accident involving 2010 champion Jack Sodeman, Jr. along with Brandon Matus and Gary Kriess, Jr. Sodeman got upside down and was later taken for further evaluation.

The final 21 laps went caution-free as Holtgraver set a blistering pace. Dave Blaney, who started clear back in 22nd, passed Kuriger for second on lap 18, but was no match for Holtgraver as his Bonnell’s Rod Shop/Ambulance Information Management/Alternative Power Sources/DKW Transport-sponsored, J&J, Hoosier Tire-shod #D4 won by a whopping 9.972 seconds! The victory was Holtgraver’s fifth of his career at Sharon.


Bowser, who started ninth, passed Kuriger on lap 23 to finish third. Kuriger, who has one career win at Sharon, dropped to fourth. John Garvin, Jr., who is a rookie with the All Stars in 2017, turned in his best career Sharon finish in fifth. Completing the top 10 were third-generation racer Sye Lynch, Darren Pifer, Davey Jones, Brent Matus, and Dan Shetler. Heat winners were Brandon Matus, Kuriger, and Holtgraver over the 26-car field. The “410” Sprint Cars will make their season’s fourth appearance for another $3,000 to-win non-sanctioned event part of the “Apple Festival Nationals” on September 8-9.

For the first time in nearly two years, Rusty Moore returned to victory lane in the Gibson Insurance Agency Stock Cars. The 54-year-old New Castle, Pa. veteran became the season’s fifth different winner in six races, and earned $700 as the high pay structure was used with 30 cars on hand!

An invert zero from the heat races put Moore on the pole and he took charge early on. Fourth starting Brian Carothers moved past Mike Miller on lap two for second and chased Moore over the next 12 laps before taking the lead on lap 14. Carothers looked primed to be headed for his first win in two years; however, a caution for Steve D’Apolito, who had raced from 14th to fourth before getting into the wall, set up a one-lap shootout to the finish.

Carothers suffered problems on the restart as Moore took back the lead and held off defending champion and current point leader, Paul Davis, by 0.923 of a second for his first win since August 29, 2015 and just the third of his career at Sharon. Hunter Exley came home a career best third after starting 13th. Curt J. Bish and Andy Thompson were fourth and fifth. Rounding out the top 10 were two-time winner, Chris McGuire, Noah Brunell, Michael Hudzik, Jamie Duncan, and Don McGuire. Heat winners were Miller, Davis, and Moore. Brett McDonald won the last chance B main.

Rocky Kugel was the benefactor of two other leaders’ misfortunes to claim his second win in as many weeks in the HTMA/Precise Racing Products RUSH Sportsman Modifieds. The 20-lap victory was the 41-year-old East Liverpool, Ohio driver’s third of the season as he became the division’s top winner breaking the tie with Kole Holden and Chas Wolbert.

Wolbert, who won the $800 make-up feature last Saturday night, led the first 10 laps before losing a driveshaft and handing the lead to point leader, Holden. Holden would lead the next nine laps, but came up one lap shy of victory as he struck an infield tire and spun out. Sixth starting Kugel became the event’s third leader and would lead just one lap, but it was the important one as he collected his ninth career win by 0.898 of a second over Kyle Martell in his Classic Landscaping-sponsored #83x. Steve Slater, Anthony Gillespie, and Chelsie Kriegisch were third through fifth. Wolbert and Holden won the heat races. The 14 cars on hand was the lowest count since September 11, 2015 one week after 29 cars competed.

Last Saturday night, Steve Haefke charged from the 23rd starting spot up to third before spinning out ruining his bid for six straight Econo Mod wins. On Saturday night, the 51-year-old Austintown, Ohio driver wasn’t penalized due to his win streak ending, and had to come just from the third starting spot to score his track leading sixth victory of the season in the Summit Racing Equipment-sponsored division. With more than a full field of cars on hand, the highest pay structure was utilizing with Haefke earning $400.

Haley Lapcevich led the first 13 laps in her bid for her first career win before Haefke would make what would be the winning pass on a restart on lap 14. Haefke went on for his 15th career win in the division and 16th overall at Sharon in his Tub’s Automotive/Wedge Motorsports/Davenport Performance/O’Reilly Auto Parts-sponsored #41 by a margin of 1.179 seconds. Haefke has now finished either first or second for 23 of the last 26 features dating back to 2015!

Brandon Blackshear and Jacob Eucker were able to get by Lapcevich for second and third on the final lap. Lapcevich was running second on the last lap and held onto fourth despite spinning. Wayne Daniels completed the top five. Haefke, Ty Rhoades, and Lapcevich won the heat races over the 26-car field, which was the highest since September 14, 2013.

Luke Mulichak of Girard, Ohio won the season’s second appearance by the “Young Guns” Junior Sprints. Mulichak led all six laps of the feature to become the third different winner in as many races held dating back to last year’s “Apple Festival Nationals” as he joins Mike Lutz, Jr. and Jordan Simmons as past winners.

Coming up next Saturday (August 19) will be the four regular divisions in action for the next-to-last “Steel Valley Thunder” program featuring the Big-Block Modifieds, Stock Cars, RUSH Sportsman Modifieds, and Econo Mods. It’s also Twin-State Auto Racing Club Night with free general admission for club members or $20 pit passes. Pits open at 4 p.m. with grandstands at 5 and racing at 7. Adult admission is just $10 and pit passes are $30.