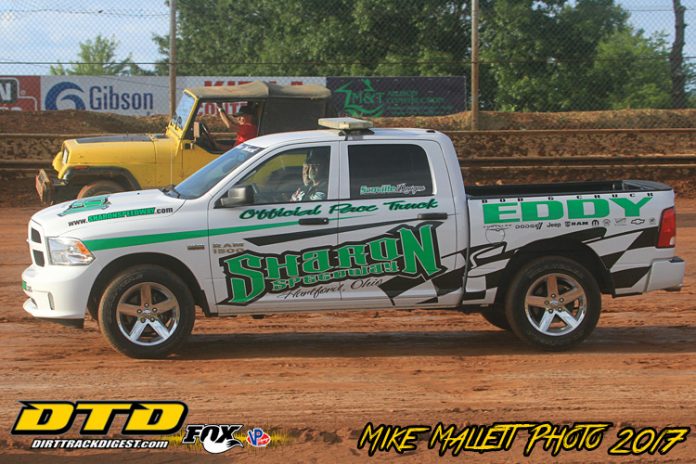 HARTFORD, OH – After fighting with Mother Nature for much of the year, Sharon Speedway has hit the homestretch with better weather and will look to complete the fifth straight “Steel Valley Thunder” program this Saturday night (August 26). This will be the final night of points with championships on the line in the Hovis Auto & Truck Supply Big-Block Modifieds, Gibson Insurance Agency Stock Cars, HTMA/Precise Racing Products RUSH Sportsman Modifieds, and Summit Racing Equipment Econo Mods. Kids bike races will be held at intermission. Race time is 7 p.m. Grandstand admission is just $10.

It’ll be a big night for the RUSH Sportsman Modifieds as they’ll compete in the twice rained out Bicknell Racing Products Touring Series event part of their fourth annual “Manufacturers Night”. This year, a record amount of nearly $20,000 in products has been posted by RUSH for all of their competing drivers to share in. The giveaways will take place at 6:30 p.m. behind the flag stand. Drivers must be present to win.

The RUSH Sportsman Modified division has been very strong this year. Earlier this season, an all-time division record 30 cars were on hand to compete, and there were 29 cars on August 5 for the double features. Saturday’s program is expected to draw a large field of cars as well. Kyle Martell enters the night as the RUSH Tour point leader by 15 over Anthony Gillespie; meanwhile, Kyle Holden is coming off his third win at Sharon and has a commanding 31-point lead in the HTMA/Precise Racing Products points at Sharon. Chelsie Kriegisch has had a consistent season as she’s just seven points back in third. Two-time winners, Chas Wolbert and Rocky Kugel, are tied for fourth in points.

John Mollick not only made a surprise visit last Saturday night, but the veteran Late Model racer also came away with his first career Big-Block Modified win! After two straight wins, Rex King, Jr. was relegated to a 12th place starting spot. The Bristolville, Ohio driver worked his way to fourth at the finish and will enter Saturday night with a 29-point advantage on Jim Weller, Jr. A championship for King, Jr. would give him his third Hovis Auto & Truck Supply crown in four years. Weller was the last driver other than a King to win a title back in 2013. Third through fifth in the standings are Dave Murdick, Jim Rasey, and Rex King. Murdick is the only other driver with a mathematical shot at the crown.


Had it not been for a spin running third on the final lap, Paul Davis would have been a lot closer to clinching the Stock Car Championship. Davis will now enter Saturday night with an 18-point lead in the Gibson Insurance Agency standings on Andy Thompson, who is looking for his season’s first win. The division has been strong all year with car counts and quality. Andrew Gordon became the sixth different winner in race races last Saturday night over a season high regular event field of 32 cars, which allowed for a non-qualifier event. Two-time winner, Chris McGuire, is third in points over three-time champion, Mike Clark. Hunter Exley, who is in his first full season of competition, sits fifth.

Kyle Miller stole a seventh win away from Steve Haefke last Saturday night when he went to the outside and drove by the Econo Mod point leader with two laps to go to garner his first career win at the track! Haefke has a 38-point lead on Brandon Blackshear and merely has to show up and attempt to compete to earn his second consecutive Summit Racing Equipment title. Haefke though will look to continue his amazing run of two finishes, which stands at 24 in the past 27 races dating back to 2015. Miller, Mike Hillman, and Brian Toto are currently third through fifth in the standings as they look for their career best point finishes.

Pits open at 4 p.m. with grandstands at 5, and racing at 7. Grandstand admission is $10 for those 14 and over. Patio seating upgrades are just $5 and fan suite seating upgrades are just $20 over the cost of general admission. In order to reserve either of these ahead of time, call the office Monday through Thursday from 10 a.m. to 2 p.m. at 330-772-5481. As always, children under 13, parking, and camping is always FREE! Pit passes are $30. Sharon has a no carry-in cooler policy.

There will be no racing over Labor Day weekend. The 88th anniversary season will conclude on September 8-9 with the “Apple Festival Nationals” this year featuring a $3,000 to-win event for the “410” Sprints along with most all of the regional divisions.