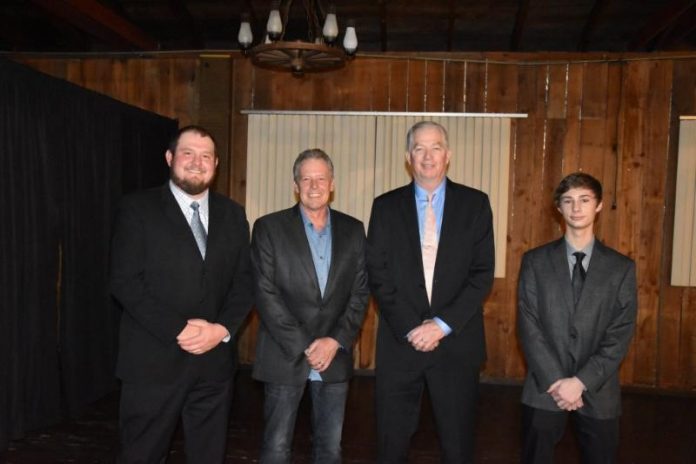 For the third time in four years, Rex King, Jr. was the Hovis Auto & Truck Supply Big-Block Modified Champion. King, Jr. also captured his amazing fifth straight “Drive to be a Champion” title honoring Lou Blaney and earned another $1,010. The recently turned 29-year-old Bristolville, Ohio driver picked up three wins in the #165 and recorded a perfect nine-for-nine in top five finishes to easily win the points by 46 over Dave Murdick. King, Jr. now owns 23 career wins, which is fifth all-time in the division and third amongst active drivers. The Kings have now won six of the last eight track championships at Sharon and own eight total.

After losing out on the 2014 championship by a tiebreaker to Mike Clark, veteran racer Paul Davis has now won back-to-back Gibson Insurance Agency Stock Car titles. In 2016, Davis captured his first ever track championship in 37 years of trying! The 57-year-old had just one win in 2017, but was able to finish in the top five in all eight starts in his Ocala Restaurant Supply/Hoover Racing/Tub’s Automotive-sponsored #3 to comfortably win the points by 36 over Andy Thompson! Davis is now tied for sixth on the all-time Stock car win list with 22 victories.

Kole Holden started the season off winning two of the first three features for the RUSH Sportsman Modifieds. The 19-year-old would add one more win as he recorded eight top 5s and nine top 10s in nine starts as he became the third different HTMA/Precise Racing Products Champion in three years. The Tiona, Pa. driver also recorded five heat race wins in the Dana Holden-owned, D&D Oil/Baker Motorsports/Dave Lyon Racing/Russ King Racing/DAH Oil-sponsored #2. Holden, who won RUSH’s 2015 “Futures Cup” crown, finished second in the RUSH Weekly and Touring Series points in 2017. It was tremendous season for the RUSH Sportsman Modifieds with an average car count of 24 per night. An all-time division-record 30 cars turned out for the season opener, and for the second straight year only on one occasion did the car count dip below 20.


For the second straight season, Steve Haefke pretty much went unchallenged to capture the Summit Racing Equipment Econo Mod title. The 52-year-old Austintown, Ohio veteran led the way at the track with six feature wins along with 10 top fives, and picked up five heat race wins along the way to win the championship by a commanding 57 points. Haefke’s Tubs Automotive/Wedge Motorsports/Davenport Performance/O’Reilly Auto Parts-sponsored #41. Haefke has climbed the division’s all-time win list and now sits second with 15 victories trailing Blackshear by six.

Special award winners were Kyle Miller-Most Improved and Hunter Exley-Rookie of the Year. One year after winning the track’s Rookie-of-the-Year, Miller, 22 of East Hickory, Pa., improved three spots in the standings, picked up his first win, had three more top 5s (five) and three more top 10s (nine) than his 2017 statistics. Exley meanwhile had to miss nearly the entire 2016 season due to an automobile accident, but the 18-year-old Franklin, Pa. driver bounced back with a great 2017 season against the tough Stock Car competition finishing fourth in points with two top 5s and six top 10s. Exley is also a leading contender for Walt Wimer’s prestigious Western PA “Rookie-of-the-Year” honors region-wide.

The 2018 season will begin on Friday, April 20 with the Lucas Oil Late Model Dirt Series in a $12,000 to-win event presented by Barris Truck Service and Performance Bodies. The RUSH Sportsman Modifieds will also be on the card for $600 to-win. The following Saturday (April 28) will kick-off the “Super Series” presented by Menard’s for the Big-Block Modifieds in a Mod Tour event for $2,000 to-win. The Stock Cars, RUSH Sportsman Modifieds, and Econo Mods will also be part of the show.