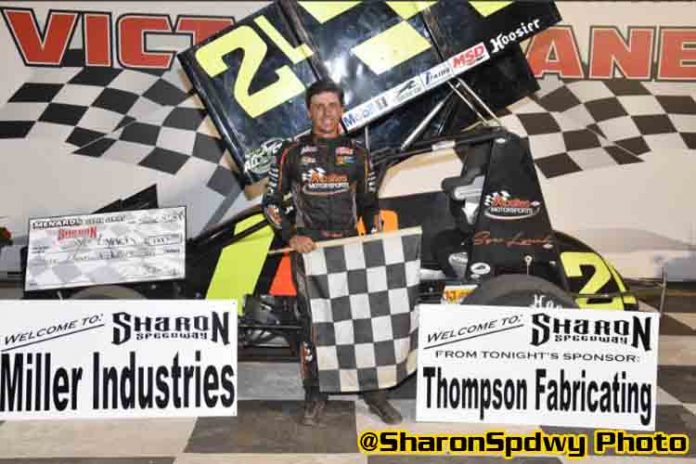 While Sye Lynch led all 30 laps from the pole, the “410” Sprint Car win was far from easy as he had to withstand heavy pressure from John Garvin, Jr. and Brandon Matus throughout lapped traffic. Last September, Lynch won his first career “410” feature and now has two at the track- both worth $3,000 for the third generation racer whose father Ed, Jr. is the track’s all-time winner at 50 victories.

“This feels amazing to first off get another win here but everyone that follows us knows that we’ve had a lot of demons with this car (#2L) this year but I think we’re getting along quite well now,” expressed the 20-year-old Apollo, Pa. racer. “It was an amazing track just like at last year’s Apple Nationals. It’s a little slick during the day, but once the night comes it gives you guys some great racing. I have to thank my sponsors, family, and of course the fans because if it wasn’t for you we wouldn’t be doing this.”

Lynch nosed ahead of George Hobaugh at the start-finish line to lead lap one and by lap two the duo began to distance themselves from Garvin, central Pa. invader Jordan Givler, and Matus. Sixth starting Matus moved ahead of Givler for fourth on lap three. Lynch increased his lead on lap four, while Dennis Wagner moved into the top five. Lynch had a straightaway lead on Hobaugh when he caught lapped traffic on lap six, but would have a clear traffic after a caution for Wagner, who spun on the backstretch after contact with the fence.


When racing resumed on lap six, Garvin went to the outside of Hobaugh to take second with Matus following in third. Garvin and Matus began to reel in Lynch on lap 10, but one lap later Garvin got too high smacking the fence, which allowed Matus to move to runner-up. Gary Kriess, Jr. had worked from 17th to fifth, but brought out the red when he got upside down in turn four. He was okay.

Back under green on lap 17, Lynch pulled away while the battle was on for second. Garvin went to the bottom and raced side-by-side with his brother-in-law over the course of the next four laps, but Matus had the momentum off the top to maintain second. Ironically, Andy Feil brought out the event’s third and final caution when he collected the fence with 24 laps scored making all three stoppages for drivers running in the fifth spot!

When green replaced yellow for the final time, Jack Sodeman, Jr. raced into the top five getting by Brent Matus then would drive around Hobaugh for fourth on lap 27. Garvin finally got by Brandon Matus for second on lap 29 and then went after Lynch on the final lap. Lynch though had enough of a lead to hold on by 0.645 of a second over Garvin in his Mosites Motorsports/FML Industries/DieZel Snow Removal-sponsored, J&J Chassis, Kistler Engine-powered #2L. It was Lynch’s second “410” win of the season overall as he picked up a $2,000 victory at Tri-City Raceway Park earlier this season. Lynch also became the fourth different “410” winner in four races this season.

Matus was third over the hard charging Sodeman, who started 13th. Hobaugh dropped to fifth. Brent Matus was sixth over Cody Bova. Dan Kuriger came from 19th to eighth. Givler dropped to ninth in his first ever appearance and picked up the $100 longest tow bonus. Rookie “410” racer Frankie Nervo was 10th after starting 10th. Brandon Matus set fast time over the 28-car field in qualifying with a lap of 14.841. Heat winners were Hobaugh, Garvin, and Feil. Dan Kuriger won the last chance B main.

Jason Fosnaught was the benefactor of leader Bobby Whitling getting caught up in an accident in lapped traffic with three laps to go as the veteran Stock Car driver then held off Chris McGuire for his first career win at Sharon. With more than a full field on hand, the Gibson Insurance Agency-sponsored division raced for the $700 to-win purse.

“I feel bad for Bob (Whitling) but I’ve been in those situations as well and for once I’m actually the beneficiary,” explained the 39-year-old Tarentum, Pa. driver. “He was very good through the middle and I just couldn’t do what he was doing, but a win is a win and we’ll take it. The changes we made to the car for the feature at the (Steel Valley) Nationals (June 16) unfortunately weren’t the right changes, but we learned some things. This is a S&S car from Chris Schneider. I’ve known him for about 30 years so he gives me a lot of info. I called him right before the feature and he told me what to do.”

Fosnaught started from the pole and led over McGuire with fifth starting Whitling moving to third on the opening lap. Whitling then passed McGuire for second on lap three. The top three of Fosnaught, Whitling, and McGuire distanced themselves from the field on lap five. Whitling went to the outside of Fosnaught and made the pass in turn one on lap nine with the lapper of Gil DeMello playing a role. The two continued their side-by-side battle for the lead on lap 10, but Whitling cleared him one lap later.

The race continued to go caution-free; however on lap 16 heavy lapped traffic came into play. Whitling led lap 17, but tried to go low just before turn one and had nowhere to go as Jamie Duncan and Brian Carothers made contact as all three would get collected and stopped in turn one. This handed the lead back to Fosnaught who would hold off McGuire by just 0.363 of a second for the victory in the Neil Tristani-owned, Butler Truck Parts/Northern Allegheny Stone/Beck Trucking-sponsored #73.

Fourteenth starting Steve D’Apolito made a late charge. D’Apolito was running seventh on lap 17 before Whitling’s misfortune then went sixth to fourth on the lap 18 restart. D’Apolito then passed Mike Clark on lap 19 to secure the third spot. Mike Miller got by Clark on the final lap to finish fourth with Clark dropping to fifth. Rusty Moore, Whitling, and Miller won the heat races over the 27-car field, while Tyler Thompson captured the last chance B main.

In his first season in the RUSH Sportsman Modifieds, Garrett Krummert has picked up two victories at Pittsburgh and one at Tri-City. On Saturday night, Krummert led all 20 laps of the HTMA/Precise Racing Products feature holding off standout Alan Dellinger for his first win of the season at Sharon. With a full field of cars on hand, the RUSH Mods raced for the $500 to-win purse once again.

“This car is pretty good but having Dellinger beside me all the time is tricky because he’s probably as good as anyone in any class so this one was tough tonight,” stated the 30-year-old Ellwood City, Pa. driver. “Jerry Schaffer owns this car. We talked about things over the winter after the eligibility rules were changed so Jerry gave me the chance to do this and we’ve had a lot of fun so far.”

Krummert used the outside to pass Dellinger on the opening lap for the lead with Kole Holden, Chas Wolbert, and Tony Tatgenhorst in tow. Wolbert passed Holden for second on lap two. By lap six, Krummert, Dellinger, and Wolbert pulled away. On lap seven, Krummert extended his lead, while the battle was on for second. Dellinger and Wolbert then closed back in again on lap 10 before Krummert caught lapped traffic on lap 14.

The final three laps saw Krummert pull away to win by 1.868 seconds in the JGCP-owned, Rentools & Equipment/Fombell General Store/Turn 4 Toilets-sponsored #10S as he also took over the points lead. Krummert also won a Big-Block Modified feature at Sharon in 2015. Dellinger was a season best second over Shea. Eighth starting Rocky Kugel passed Holden on lap 19 to finish fourth with Holden dropping to fifth. Dellinger, Krummert, and Holden won the heat races over the 24-car field.

Jacob Eucker ended the night taking a first career Sharon win away from points leader Ty Rhoades in the 20-lap Econo Mod feature. Eucker made the winning pass with four laps to go to capture his second win of the season in three Summit Racing Equipment events. With more than a full field on hand, the Econo Mods raced for the $400 to-win purse.

“I knew I had to take it in hard on him then get to the bottom as fast as I could,” explained the 17-year-old Fowler, Ohio driver. “I’d like to thank my dad, mom, and all of my sponsors.”

Rhoades started on the pole alongside Dustin Demattia. Those two raced side-by-side for basically the first nine laps with Demattia on the top and Rhoades on the bottom. Demattia led laps five through eight, but got too high on lap nine allowing Rhoades to regain the lead. Following the event’s first caution with 11 laps completed, Eucker moved into third then inherited second when Demattia got too high again and this time smacked the fence on lap 14.

Following a caution for Brian Toto’s spin, Eucker used the outside to pass Rhoades on the lap 16 restart. Eucker would then survive another caution that set-up a one-lap shootout to the finish as he took the checkered flag first by 0.554 of a second in his Ohio Commerce Center/Bucks Ground Maintenance/Danski Dyno/Dr. John Eucker/CRS/Lees Excavating-sponsored #64. The victory was Eucker’s ninth of his career in the division and 10th overall at Sharon.

Rhoades, who has been so close to victory so many times at Sharon and has won at other regional speedways, had to settle for second. Former Econo Mod racers Brandon Blackshear and Jeremy Double, returned to the class on Saturday night and finish third and fourth respectively in their season debuts. Josh Mueller was fifth. Steve Haefke, Mueller, and Blackshear won the heat races over the season-high 28-car field. Butch Lambert won the last chance B main in his season debut then raced from 19th to eighth in the feature.

Coming up on Monday (July 2) will be the Lucas Oil Late Model Dirt Series in a $12,000 to-win event along with the RUSH Sportsman Modifieds for $600 to-win presented by Barris Truck Service and Performance Bodies. Pits open at 4 p.m. with grandstands at 5 and racing at 7.

Next Saturday (July 7) will be the 10th annual “Lou Blaney Memorial” presented by Ollie’s Bargain Outlet. That event will feature the third and final appearance of the season by the All Star Circuit of Champions along with The Mod Tour big blocks in a $2,000 to-win event. The night will benefit the Alzheimer’s Association. Reserved tickets are also on sale through the website. All gates open at 3 p.m. with warm-ups at approximately 6:30 following by qualifying and racing.