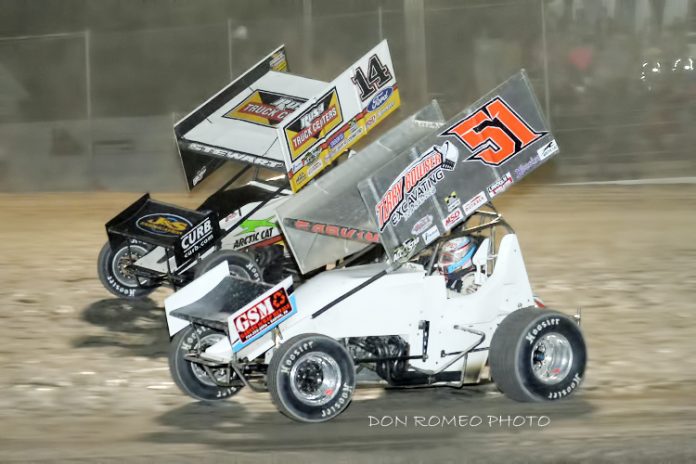 BROWNSBURG, IN – The Arctic Cat All Star Circuit of Champions presented by Mobil 1 will invade Sharon Speedway in Hartford, Ohio, for the third and final time of 2018 during the upcoming weekend, this time honoring the late, great Lou Blaney with the 10th Annual Lou Blaney Memorial worth $5,000 on Saturday, July 7. Certainly synonymous with All Star Circuit of Champions sprint car competition, Sharon Speedway has hosted the traveling Series on 102 occasions since the All Stars first made tracks in Hartford in 1970, crowning 51 different winners in nearly as many seasons.

Lou Blaney, the father of current All Star full-timer and former World of Outlaws champion Dave Blaney, as well as 134-time All Star winner and six-time Series champion Dale Blaney, is also a former All Star winner, capturing a victory at Jennerstown (Pa.) Speedway during the Series’ inaugural season in 1970. The All Star victory was the first and only on Blaney’s impressive, hall of fame worthy, short track resume that also includes a combined win total of 132 at Sharon Speedway alone; 121 in a modified and 11 in a sprint car.

The 10th Annual Lou Blaney Memorial will launch a short, but competitive July schedule for the All Star Circuit of Champions that includes seven events across five states, all of which contested at seven different facilities. Included in the mix is a four-race Midwest swing that features events in Wisconsin, Minnesota, and Iowa on Thursday through Sunday, July 26-29.

Although second in the current All Star driver championship, Clute, Texas’ Aaron Reutzel will enter the weekend hot; sweeping the most recent weekend of competition during a two-day visit to Indiana and Illinois. The five-time All Star winner, who claimed victories at Plymouth (Ind.) Speedway and at the Dirt Oval @ Route 66 (Ill.) during his Midwest winning spree, trails the current All Star driver championship leader, Carson Macedo, by just eight markers entering the Lou Blaney Memorial. Macedo has a pair of victories on the season, also earning 12 top-five finishes in 20 feature starts.

In addition to Carson Macedo and Aaron Reutzel, full-time Arctic Cat All Star Circuit of Champions presented by Mobil 1 competitors with victories this season include Chad Kemenah (2), Jac Haudenschild (1), and Paul McMahan (2). Reutzel’s first All Star victory of the season, as well as the first of his career, took shape at Sharon Speedway during the inaugural Buckeye Cup on Saturday, May 5.

Sharon Speedway in Hartford, Ohio, will open pit gates at 3 p.m. on Saturday, July 7. Main gates will also open at 3 p.m. with activities to follow behind the main grandstands. An All Star drivers meeting is set to begin at approximately 6 p.m., followed by hot laps and qualifying time trials. Those who are seeking additional information regarding the 10th Annual Lou Blaney Memorial should visit Sharon Speedway live on the Web at www.sharonspeedway.com.