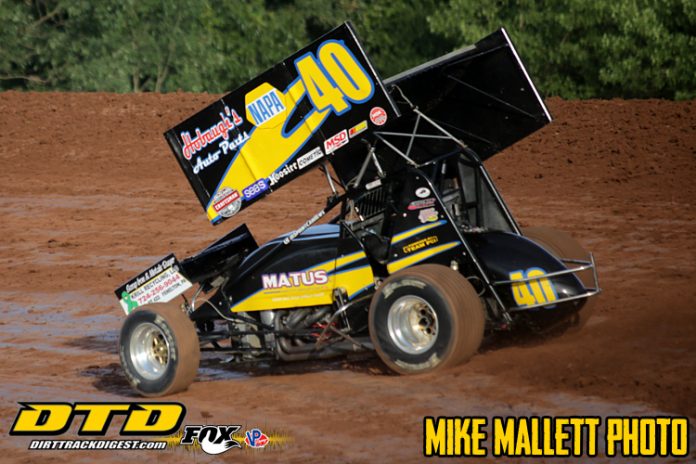 After nearly pulling off the upset of the year at last month’s “Lou Blaney Memorial” for the All Star Circuit of Champions taking the lead late from Dave Blaney then settling for second, George Hobaugh charged from the ninth starting spot to pass Jack Sodeman, Jr. on lap 13 then drove away for his first career “410” Sprint Car win. The 30-lap victory was worth $3,000 as Hobaugh became the sixth different “410” Sprint Car winner in as many events this season.

“I knew I was better on the bottom and suck running the top so I don’t even try,” acknowledged the 35-year-old Chicora, Pa. winner. “I just try to be the best I can be on the bottom. We caught him (Sodeman) before the caution came out with speed. I was playing with the wing a little bit and was deciding where to put it and made the right decision. This is my first 410 win ever so I’m pretty happy about that, and I’m hoping we can have some more! I have to thank my wife Nikki, my dad supports me, and everyone that comes out and helps. Matt Turner helped me tonight. We’ve had a rough couple weeks so this is a lot better.”

John Garvin, Jr. took off in the early lead, while Sodeman raced from fourth to second ahead of Darren Pifer, Bryan Salisbury, and Andy Feil. Feil and sixth starting Sye Lynch, who won the last non-sanctioned “410” Sprint race back on June 30, passed Salisbury for fourth and fifth on laps two and three respectively. Sodeman closed on Garvin and the two second generation racers battled side-by-side for the lead on laps four and five with Sodeman leading the fifth circuit.

Sodeman caught lapped traffic on lap seven, while Feil and Lynch closed in on Garvin in the race for second. Lynch, who won his first career Lernerville feature Friday night, took third from Feil on the seventh circuit. Hobaugh would come out of nowhere as he passed Feil for fourth on lap nine then made a slick move to sneak under and past both Lynch and Garvin on lap 11.

The race was then halted for the first time with 12 laps scored when Feil got upside down in turn three, while battling with Gerard McIntyre, Jr. in lapped traffic. He was okay. Carl Bowser was also involved. When racing resumed, Michael Bauer took a wicked ride into the turn one catch fence. He was shaken, but walked to the ambulance on his own power. Gary Kriess, Jr. was also involved.

When racing resumed on lap 13, Hobaugh made his winning pass by driving under Sodeman in turns one and two, while McIntyre passed Garvin for fourth. Hobaugh quickly drove away, while an intense battle ensued for second between Sodeman, Lynch, and McIntyre. Lynch would backpedal as he lost third to McIntyre on lap 20 and then fourth to the high-flying Bowser. Bowser continued his charge forward passing McIntyre for third on lap 23 then Sodeman for second the following lap.

Even though Bowser was faster in the final laps, Hobaugh’s lead was insurmountable as he took the checkered flag first by a big 4.410 margin in his Collier’s Custom Kitchens/Hobaugh’s Auto Parts-sponsored #40. After getting caught up in an accident, Bowser charged from the tail in the final 18 non-stop laps for a runner-up finish. McIntyre, a regular on the central Pa. circuit, was third one night after a runner-up finish at Lernerville. Sodeman dropped to fourth over Lynch. Brandon Matus was sixth. Justin Barger came from 19th to seventh over Dan Kuriger, Garvin, and Brent Matus.

Sodeman set fast time overall against the 29-car field in qualifying with a lap of 13.972. Feil, Salisbury, and McIntyre won the heat races, while Barger captured the last chance B main. Don Blaney also got upside down in his heat race. He was okay, but done for the night.

Rusty Martz inherited the lead on lap eight after the top two of Larry Kugel and Steve D’Apolito tangled, then held off points leader, Chris McGuire, over the final 10 laps for the $500 Gibson Insurance Agency Stock Car win. The win for Martz ended a near six-year winless drought at Sharon as his last and only win came back on October 6, 2012 in a $1,500 to-win season ending event.

“The drive home will be a lot easier tonight,” said the 40-year-old who towed in from Brookville, Pa. “The track was kind of funky tonight. It seemed tight early. I adjusted the brakes so I didn’t hurt my tires, but it started to slow down at the end.”

Kugel used the outside to take the lead over D’Apolito, while Martz passed Mike Clark for third on the opening lap. D’Apolito hounded Kugel, but would get into Kugel’s left rear racing off turn four on lap seven sending Kugel spinning into the infield. Though D’Apolito would lead the lap both him and Kugel were sent to the tail.

Martz inherited the lead when racing resumed on lap eight. McGuire started back in 12th and moved to second on lap 11 getting by Brian Carothers. Martz and McGuire put on a great race running nearly side-by-side over much of the final 10 laps until Martz got away late to win by 1.966 in his #16M. McGuire’s runner-up allowed him to extend his points lead. Tyler Thompson, who started 10th, passed Carothers on lap 15 to finish a Sharon career best third. Carothers dropped to fourth over Curt J. Bish. Martz and Clark won the heat races over the season low 20-car field.

Chas Wolbert dominated much of the 20-lap HTMA/Precise Racing Products RUSH Sportsman Modified feature until a late-race caution bunched up the field. Wolbert though was still too strong defeating last Saturday night’s winner, Josh Deems, to become just the second repeat winner of the season. With more than a full field of cars, the RUSH Mods raced for the $500 to-win purse.

“We’ve been struggling a little bit,” stated the 24-year-old Warren, Ohio winner. “I’m sure a lot of people were here last week when we lost on the last lap, but we’re here when it matters. I have to thank God because without him none of this would be possible. I also want to thank all of the track and fire crew, Dave Willoughby, the fans in the stands, my dad, my wife and little boy, all the help I get from the Clay brothers, and my sponsors.”

Wolbert powered past pole-sitter and rookie Jacob Wolfe to take the lead at the start, while sixth starting Deems gained two spots on the opening lap to fourth. Deems made a nice move to pass both Chelsie Kriegisch and Wolfe for second on lap two, but already found himself a straightaway behind Wolbert. Kole Holden and Brian Schaffer disposed of Wolfe for third and fourth on laps five and seven respectively.

Wolbert caught lapped traffic at the halfway point, but did a great job maintaining a sizable lead until Jim Bryce slowed with a flat tire after 14 non-stop laps. This would put Deems alongside Wolbert for the double-file restart, but Wolbert drove back into the lead, while eighth starting Garrett Krummert passed both Schaffer and Holden for third.

Jacob Eucker entered the night as the only repeat winner this season in the Econo Mods. After winning the 20-lap Summit Racing Equipment feature from eighth following a great battle with Matt Alexander on Saturday night, Eucker is now the first driver in any division this season to win more than two features! With a full field on hand once again, the Econo Mods raced for the $400 to-win purse.

“He (Alexander) raced me real clean,” expressed the 17-year-old Fowler, Ohio driver who went from third to first in points on Saturday night. “I’d like to thank my dad especially, my mom, and all of my sponsors.”

Brandon Blackshear took charge early over a pair of #77’s in fourth starting Dustin Demattia and Alexander. Demattia has been fast all year, but slowed in turn one then got run over by Nate Young. That moved Alexander back to second, who would race side-by-side with Blackshear for the next two laps before taking over on lap three.

Despite starting eighth, Eucker quickly moved forward and drove around Blackshear for second off turn two on lap three before a caution for a spin by Ed Harris. When racing resumed, Eucker took the lead to become the third different leader in the first four laps. Alexander came right back to lead lap five before Eucker’s winning move came following a restart on lap six as he used the outside again to power to the lead.

A caution for a spin by Brian Toto with 16 laps scored would be the event’s final stoppage as Eucker’s 10th career Econo Mod win and 11th overall at the track came by 0.583 of a second in his Ohio Commerce Center/Bucks Ground Maintenance/Danski Dyno/Dr. John Eucker/CRS/Lees Excavating-sponsored #64. Alexander recorded a career best Sharon finish in second. Ninth starting Dwayne Clay was third. After pitting early, Jeremy Double charged back to fourth over Buzz Seitz. Alexander, Blackshear, and Ty Rhoades won the heat races over the 24-car field.

Next Saturday (August 11) will be an identical show as Saturday night in a another Menards “Super Series” event on Kams Electric Services Night with “410” Sprint Cars for $3,000 to-win, Stock Cars, RUSH Sportsman Modifieds, and Econo Mods. Pits open at 4 p.m., grandstands at 5 with Sprint qualifying at 6:40 followed by racing.