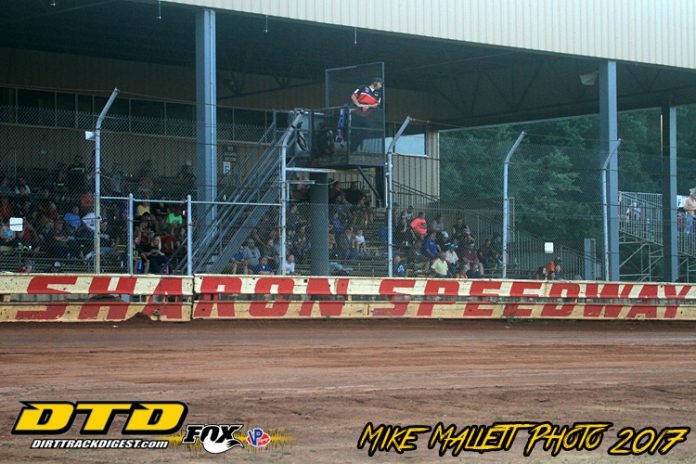 After a month hiatus, the “410” Sprint Cars had a successful return last Saturday night. Twenty-nine Sprints were in the pit area as George Hobaugh charged from the ninth starting spot to capture his first career “410” win. Saturday marks the second of three straight Saturday night appearances with once again $3,000 to-win, $250 to-start for their 30-lap feature.

There has yet to be repeat winner in the six events contested thus far this season as Aaron Reutzel, Christopher Bell, and Dave Blaney were victorious in the All Star-sanctioned events, while Chad Kemenah, Sye Lynch, and Hobaugh captured the $3,000 non-sanctioned victories. Will there be a seventh different winner on Saturday night!? A strong field of local and regional talent is again expected.

“The Sprint Cars again put on another night of great racing last Saturday night,” said General Manager Dave Willoughby. “We have continued to have not only tremendous racing, but excellent car counts and great crowds. We’ve had at least 28 Sprints at our three non-sanctioned shows and over 40 at all of the All Star races. We can’t thank the racers and fans enough for responding this year.”

Saturday will again utilize the hot lap/group qualifying format that was used on the prior three Menards “Super Series” Sprint Car events. Two to three cars will qualify at a time only amongst their heat race group. The fastest four in each heat will be inverted with the top three redrawing plus the fastest transferring non-top three finisher if there are three heats or the top two plus the two fastest transferring non-top two finishers if there are four heats. The B main will be lined up heads up on heat race finishes. Heat and B main finish(es) will complete the 24-car starting lineup. Mufflers are not required and there’s no registration or entry fee.

While rain plagued much of the early season not allowing a Stock Car event to be completed until the June 16 “Penn-Ohio Steel Valley Nationals”, dry weather of late has allowed the Gibson Insurance Agency-sponsored division to complete four events since the division’s opener. Two of the five events completed were Penn-Ohio shows with Brent Johnson taking $10,000 on June 16 and Andrew Gordon $1,000 on July 28.

The three regular events saw outsiders Jason Fosnaught, Gordon, and most recently Rusty Martz capture wins. That makes four different winners in five events. The top four drivers in points are still looking for their first win of the season. Chris McGuire has an 11-point lead over four-time track champion, Steve D’Apolito, in the track standings. Curt J. Bish, Mike Clark, and Fosnaught are third through fifth in points.

Chas Wolbert became just the second repeat winner of the season last Saturday night joining Garrett Krummert in the competitive RUSH Sportsman Modifieds. The HTMA/Precise Racing Products-sponsored division has produced five different winners in seven races. The GM 602 crate engine class continues to draw solid car counts. There were 27 cars on hand last Saturday night, and only on two occasions over the past three years (once in 2016 and once in 2017) has the car count dipped under 20. Krummert maintains a 19-point lead over Josh Deems, who is having his best career season. Wolbert has moved up to third in points over defending champion, Kole Holden, who has been consistent despite being shutout of victory. Kyle Martell is fifth.

Seventeen-year-old Jacob Eucker became the first driver at the track this season to win more than two events with his third win of the season last Saturday night in the Econo Mods. After trying his hand in open E-Mod competition, Eucker has returned to the Econo Mods full-time this season and leads the Summit Racing Equipment points as he looks for his first track championship. The nearby Fowler, Ohio racer has just a two-point lead on Ty Rhoades, who won his first career Sharon race on July 28. Defending two-time champion, Steve Haefke, is third just seven points back of the top spot. Brian Toto and Mark Titus are fourth and fifth in points still looking for their first career wins at the track.

As a reminder on Saturday for the Stock Cars, RUSH Sportsman Modifieds, and Econo Mods, if 24 or more cars are present then the highest purse structure will be offered, and if there are 32 or more cars a non-qualifier will be run.

Pits are open throughout the afternoon on Saturday with pit passes going on sale at 4 p.m., while the main grandstands open at 5. Drivers meeting will be at 6:10 p.m. Pill cutoff and Sprint engine motor heat is at 6:25 p.m. with Sprint qualifying at 6:40 followed by heat races.

Grandstand admission for those 14 and over is $13. Patio seating upgrades are just $5 and fan suite seating upgrades are just $20 over the cost of general admission. In order to reserve either of these ahead of time, call the office Monday through Thursday from 10 a.m. to 2 p.m. at 330-772-5481. As always, children under 14 and parking are always FREE! Pit passes are $30. Pit passes for children 12 and under are $20. As a reminder, coolers nor outside food or beverages are not permitted.

After being rained out on May 5, the northern Ohio-based FAST Series for “410” Sprint Cars will make their first ever appearance next Saturday night (August 18) in another Menards “Super Series” event. The E-Mods will make their first appearance of the season and will be joined by the RUSH Sportsman Modifieds and Econo Mods. It will be another Kams Electric Services Night.