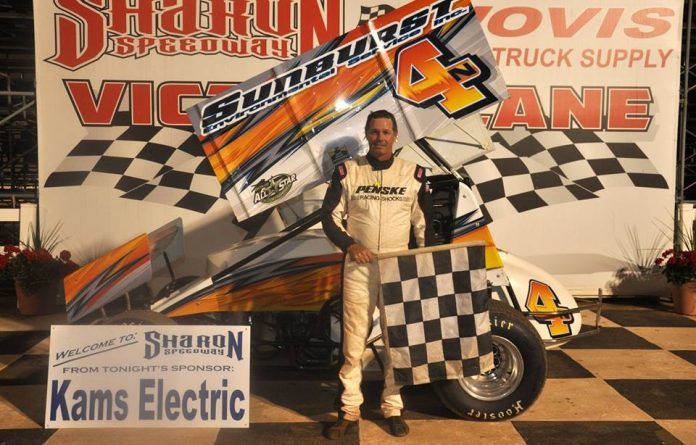 It took Dale Blaney until August 25 last season at Attica Raceway Park to keep his streak of winning at least one Sprint Car feature every season alive picking up the win in the J&M Motorsports #55. With the 2018 calendar in August, the 54-year-old Hartford, Ohio driver once again found himself looking for that elusive first win of the season. In a year that saw the National Sprint Car Hall of Fame racer only compete in a limited schedule due to a work-related injury, Blaney made just his third start of the season in Jimmy Morris’ #4N on Saturday night. Blaney would pass race long leader, A.J. Flick, on lap 20 and raced on to the 30-lap win. The $3,000 victory ran Blaney’s streak to 29 straight years of winning a “410” Sprint Car feature since his career started in 1990 when he won his very first race at Sharon!

Flick raced to the early lead and set the pace out front in search of his first career Sharon win. Blaney started fourth and followed Nate Dussel by Dan Kuriger for second and third respectively on lap three. Blaney then passed the northern Ohio invader for second on lap 12. Blaney’s winning move on Flick came with 10 laps to go as last week’s winner, George Hobaugh, grabbed third from Dussel. Blaney would take the Sunburst Environmental-sponsored #4N to its first ever “410” win by a margin of 2.297 seconds as he became the seventh different “410” winner in as many “410” events in 2018!

Flick edged out Hobaugh for second by less than two tenths of a second. Hobaugh has now recorded a runner-up with the All Stars, a first career “410” win worth $3,000, and now a third in the last three races at Sharon! Danny Smith, who is another National Sprint Car Hall of Fame racer, was fourth in his season debut after passing Dussel for the spot on lap 22. Kuriger was fifth.

Michigan’s Dan McCarron, Dussel, and another Ohio invader in Brian Smith were sixth through eighth all in their season debuts. Brian Smith started all the way back in 17th. Jack Sodeman, Jr. and Andy Feil completed the top 10. For the second straight week, Sodeman set fast time over the 29-car field in qualifying with a lap of 14.011. Cody Bova, Sodeman, and Hobaugh won the heats, while Russ Sansosti won the last chance B main.

Chris Schneider has been close to victory this season including a runner-up in the $10,000 to-win “Steel Valley Pro Stock Nationals”, but on Saturday night finally broke through for his first win of the season. A heads-up start put the 39-year-old Lower Burrell, Pa. Stock Car veteran on the pole and it was a position he’d never relinquish. Schneider’s eighth career win came in his SS Chassis & Supply #55 by 2.004 seconds over Bobby Whitling, and was worth $700 with more than a full field of Gibson Insurance Agency Stocks on hand. Schneider became the fifth different winner in six races this season.’

Whitling passed Brian Carothers on lap five to finish second. Curt J. Bish would get by Carothers on lap eight to secure the third spot, which propelled him into second in points. After getting crashed out in a freak accident last Saturday night before his heat race, Alan Dellinger raced from 10th to fourth on Saturday night. June 30 winner, Jason Fosnaught, was fifth after starting 13th. Steve D’Apolito beat out Chris McGuire for sixth. Just eight points separate McGuire, Bish, and D’Apolito in the championship hunt. Schneider, Carothers, and Bish won the heat races over the 27-car field, while Troy Norman won the last chance B main.

Chas Wolbert joined Jacob Eucker in the Econo Mods as the track’s only three-time winners in 2018. Wolbert’s win came in the 20-lap HTMA/Precise Racing Products RUSH Sportsman Modified feature. And with more than a full field of cars on hand once again, the 24-year-old Warren, Ohio driver’s victory was worth $500. In fact, Wolbert has earned $1,600 with his three Sharon victories.

Wolbert started sixth after winning last week and made his way to second on the opening lap. Wolbert wasted little time grabbing the lead on lap two from Steve Slater, which would turn out to be the winning move. Point leader, Garrett Krummert, started back in ninth and worked his way quickly to second taking the spot on lap four from Slater. Krummert would chase Wolbert over the final 16 laps, but would come up 1.916 second shy to Wolbert’s Dunkin’ Donuts/C.T. Wolbert Trucking/Russ King Racing/Ohio Intra Express/MJ’s Auto Repair/Crooked Pine Woodworking/955 Automotive/Kings Sanitary/Total Trumbull Sports-sponsored #c3 Bicknell. With Wolbert’s second straight win and seventh of his career, he’ll be forced to start no better than 12th next week.

2016 track champion, Brandon Ritchey, came from seventh to place third. Defending champion, Kole Holden, was fourth for his sixth top five finish in eight races as he still searches for his first win since August 19 of last year. Tony Tatgenhorst came from 11th to finish fifth for his first ever RUSH Sportsman Modified top five in his first year in the division. For the second straight week, there were 27 cars on hand. Heat races went to Krummert, Dellinger, and Ritchey. Pat Adams made his RUSH Mod debuted and won the last chance B main.

Eric Wilson has three career RUSH Late Model wins to his credit at Sharon Speedway. While the Late Models no longer compete at Sharon, Wilson has been racing his Late Model and Econo Mod at other tracks throughout the region. On Saturday night, Wilson made his Sharon season debut a winning one taking the 20-lap Summit Racing Equipment feature event to become the fifth different winner in seven races in 2018.

The 21-year-old Cortland, Ohio driver started sixth and was halfway to the front after one lap. Lap two saw Wilson take second from Brandon Blackshear. Wilson then made the winning pass at the halfway point grabbing the lead from race-long leader, Ty Rhoades. Wilson pulled away from Rhoades over the second-half of the race to win by a commanding 4.814 seconds in the Mike Wilson Motorsports, Mike & Teena Investments/Buster Engines/Bruce & Debbie`s Wood Fired Wagon/Close Racing Supply-sponsored #27. Jacob Eucker, the division’s only multiple winner, was third after starting 13th. Dustin DeMattia’s strong Sharon performances continued with a fourth over one-time winner, Dwayne Clay. Wilson and Kyle Miller won the heat races over the 20-car field.

Coming up next Saturday night (August 18) will be another Menards “Super Series” event with an appearance by the FAST Series for the “410” Sprint Cars in a $3,000 to-win, $300 to-start event along with the first appearance of the season by the E-Mods. The RUSH Sportsman Modifieds and Econo Mods will also return. It’s Kams Electric Service Night. Pits open at 4 p.m. with grandstands at 5, Sprint qualifying at 6:30 and heat racing at 7. Grandstand admission is $15 for those 14 and over. Pit passes are $30.