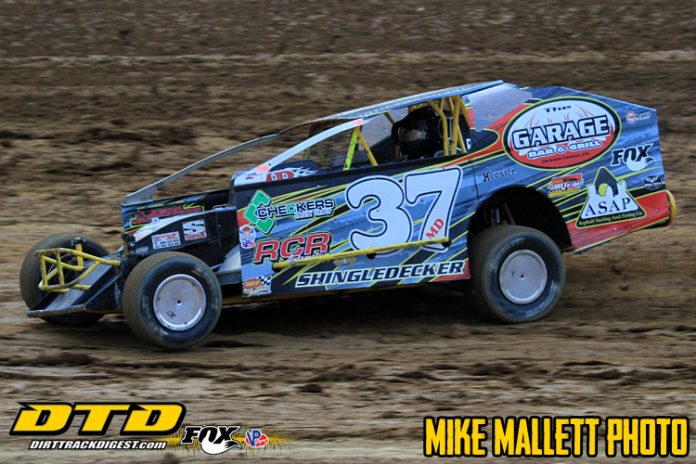 “We actually fell back there at the start,” explained the 41-year-old Polk, Pa. winner. “They watered the track so we tightened it up. The first couple laps I was being patient waiting for the moisture to get out. Once I turned it on we were up against that outside wall and it worked really wall at least until I got into it. The groove widen out and you could pretty much run anywhere. We haven’t been winning a lot in recent years and a lot of that is these little girls. We spend time with the family, but we’re getting back to working on the race car more and with some people helping us out things are going really well. I have to thank the crew; we’ve been through a lot this year after flipping the car over at Lernerville.”

Willard raced out to early lead, while Rick Regalski passed Rex King on the opening lap for second. A five-car accident slowed action with two laps scored as the next 31 would go caution-free. When racing resumed on lap three, Will Thomas III and King battled side-by-side for third until Thomas made the pass on the outside on the fifth circuit. The top four of Willard, Regalski, Thomas and King began to distance themselves from the field on lap six.


Shingledecker entered contention on lap nine when he flew around Jim Rasey for fifth. On lap 12, Shingledecker made quite the move as he drove around both King and Thomas for third. Shingledecker caught Regalski on lap 13 and continued to make the high line work driving past him off turn four for second on lap 14. Willard’s lead quickly shrunk as Shingledecker made the winning pass off the top side of turn four on lap 16.

Thomas would regain the third spot on lap 17 getting by Regalski. Shingledecker had a straightaway lead built up by the time he entered heavy traffic on lap 23. Shingledecker’s lead continued to grow, while Thomas caught Willard in the battle for second on lap 28. Jim Rasey had just passed Regalski for fourth on lap 31, but Rex King, Jr. flew around both Regalski and Rasey for the spot on the same lap. The event’s final caution slowed action when Rich Whitney spun and collected Jeremiah’s brother, Travis Shingledecker, with 33 laps scored.

Jeremiah Shingledecker’s big lead was erased setting up a double-file restart for the two-lap shootout to the checkered. Shingledecker chose the outside and quickly pulled away as he drove off to his fourth career Sharon win by 1.797 seconds in his The Garage Bar & Grill/RCR Automotive/Fox Shocks/Fast Shafts/Jones Racing Products/Simpson-sponsored #37MD.

Willard was a career best Sharon finish in second. King, Jr. passed Thomas for third on lap 34. Thomas dropped back to fourth over Rasey. Completing the top were Regalski, Garrett Krummert, King, Eric Gabany, and Dave Murdick. Heat wins over the 29-car field went to Murdick, King, and Rasey.

An all-time record field of 38 RUSH Sportsman Modifieds turned out, but in the end it was Chas Wolbert winning an unprecedented fourth straight feature. The 25-lap HTMA/Precise Racing Products victory was worth $600 and came in the Bicknell Racing Products Touring Series event part of RUSH’s annual “Manufacturers Night” that saw competing racers share in over $20,000 of product giveaways! Wolbert’s five wins this season have totaled $2,700.

“This is crazy,” stated the 24-year-old Warren, Ohio racer. “Four in a row for us and to win a tour race- I can’t believe it. Track was great, my car was great. I had a good starting spot and was patient. I knew I had 25 laps and worked my way up through there and hit every point I needed to hit. We have great competition here. Anyone can win week in and week out. I didn’t see Steve (Slater), but he’s not afraid to run out there (top). Steve is a good driver and if he had a little bit more he would have had me. I’m glad to be back in here in victory lane. Without God none of this or life is possible. I have to thank all of my sponsors and everyone that helps out on the car.”

Rocky Kugel used the outside to race into the early lead past Steve Slater, while Wolbert passed Garrett Krummert for third on the opening lap. Wolbert took second from Slater on lap two then went after Kugel as he caught the leader on lap five. Wolbert would make the winning pass driving around Kugel off turn four on lap seven. Kugel would try to get back under Wolbert in turns one and two, but clipped an infield tire and spun to bring out the first caution with seven laps scored.

Krummert had taken over third from Slater before the caution then inherited second after Kugel’s spin; however, when racing resumed on lap eight the team cars of Slater and Darin Gallagher both passed Krummert for second and third. Wolbert began to extend his lead and pulled away on lap 12 while the battled raged for second between Gallagher, Slater, Krummert, and 10th starting Rob Kristyak.

Kristyak was having his best performance of the season as he passed Krummert for fourth on lap 13. He then took over third from Gallagher on lap 20 before Gallagher got too high smacking the fence and ending his good run with 21 laps completed. Wolbert appeared headed for the win, but Jeremy Weaver lost a wheel in turn four coming down for the white flag, which set up a one-lap shootout to the finish.

Wolbert wouldn’t be denied as he still was able to win by 0.691 of a second in his Dunkin’ Donuts/C.T. Wolbert Trucking/Russ King Racing/Ohio Intra Express/MJ’s Auto Repair/Crooked Pine Woodworking/955 Automotive/Kings Sanitary/Total Trumbull Sports-sponsored #c3 Bicknell. The win was Wolbert’s ninth of his career at Sharon and fourth of his career in the RUSH Touring Series.

Chris Schneider put on a dominating performance in the 20-lap Gibson Insurance Agency Stock Car feature. Schneider started sixth and made the winning move on lap seven to capture his second straight win as he joined Andrew Gordon as the division’s only repeat winners. The victory for Schneider was worth $700 as there was a full field of cars once again.

“Really,” asked the 39-year-old Lower Burrell winner when told he won by six seconds. “I kept thought I was hearing (Alan) Dellinger and his pipes behind me so I thought I better tighten this up and not slide the car. Last week I said I was missing something and found what I was missing. It was little things that were off. She’s good now. That’s what this is all about- practicing for the big races. I have to thank God first and foremost and the fans for coming out. I also want to thank the crew here that puts this show together and keeps this place going- it’s a great track to race at. I wish I could come here every week.”

Shook jumped to the early lead over Michael Hudzik, while Chris McGuire passed Dellinger for third. Schneider was up to fifth after one lap then took fourth from Dellinger on lap two as McGuire moved into second. McGuire’s run in second was short-lived as Schneider made the pass on lap five before a caution for Jamie Maxwell and Kevin Vanzandt.

Back under green, Shook and Schneider raced side-by-side on laps six and seven before Schneider made the winning pass off the outside of turn two. Dellinger had passed McGuire for third then would inherit second when Shook put down oil the entire way around the track necessitating the caution and a lengthy clean-up period with 11 laps completed.

Dellinger would now be alongside Schneider for the double-file restart, but it wouldn’t matter as Schneider pulled away over the final nine non-stop laps to win by a commanding 6.081 seconds in his Nick Chevrolet/It’s All Clean Pressure Washing/SS Chassis & Supply-sponsored #55. The victory was Schneider’s ninth of his career and served as the final tune-up before the $2,000 to-win Penn-Ohio Series event in two weeks.

Dellinger and Clark, a three-time track champion, had their season best runs in second and third respectively ahead of McGuire, who captured his first career track title. Steve D’Apolito was fifth as he was unable to garner a fifth track championship settling for second in the standings. Schneider, Curt J. Bish, McGuire won the heat races over the 24-car field.

Ty Rhoades has had success winning features at several other regional speedways; however, it took Rhoades six years before he captured a feature win at Sharon on July 28. They always say the first win is the toughest as Rhoades’ second win came less than a month later winning for the second time in five weeks on Saturday night in the 20-lap Summit Racing Equipment Econo Mod feature.

“This is amazing,” expressed the 27-year-old Pittsburgh, Pa. winner. “I really don’t know what to say. I’ve chased this for six years here and now I get two in one year. It’s a good feeling to win here. This is by far the toughest track to win at with the best competition. Hats off to Sharon Speedway- it’s the best facility and surface in the business. I knew I had Steve (Haefke) and Jake (Eucker) right there and had to protect the bottom for all I had. I gave it up two weeks in a row to Jake. This is by a far a season to remember here. I have to thank my family- I couldn’t do this without them. I got pretty tore up last Sunday and everyone busted their hump all week while I was in Pittsburgh to make sure this car was ready for me when I got home.”

Defending two-time champion, Steve Haefke, led the field to green and looked strong leading the first eight laps in search of his first win of the season. Rhoades started fifth and moved into third on lap two then passed Brandon Blackshear for second on lap six. A caution for Gary Robinson and George Vestal IV slowed action for the first time with eight laps completed.

Eucker, a four-time winner this season, passed Haefke for second on lap 19, but would run out of time as Rhoades took the win by 1.038 seconds in his Bloom Machineworks/Trace Lawn & Landscaping/Wedge Motorsports/Always Racing/A&MP Electric/Talbor Inc/Dirt Rhoades Logging/Village Auto/Bodies by Reinwald/Weldbark Energy-sponsored #12R. Eucker’s second did secure his first track championship. Haefke dropped to third over Blackshear. Dwayne Clay came from 15th to fifth for his sixth top five of the season. Kyle Miller, Eucker, and Josh Mueller won the heat races over the 23-car field.

There will be NO racing over the upcoming Labor Day weekend. The 89th anniversary season will conclude on Friday and Saturday, September 7-8 for the annual “Apple Festival Nationals” featuring a wide array of divisions. More details are available at SharonSpeedway.com.