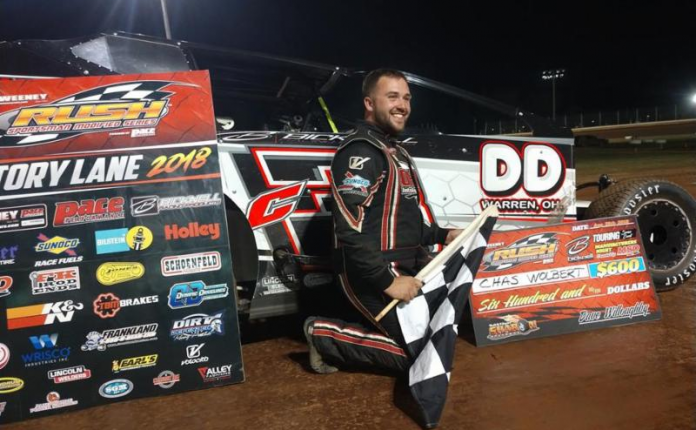 HARTFORD, OH – The Sweeney Chevrolet Buick GMC RUSH Sportsman Modified Series powered by Pace Performance participated in their first of two Bicknell Racing Products Touring Series events of the season at Sharon Speedway on Saturday night. An all-time record high of 38 cars turned out for the fifth annual “Manufacturers Night” presented by MSD Performance as a record amount of more than $20,000 in actual, useful product was distributed to the competing racers by random draw during intermission. Prizes ranged from a minimum of $300 up to $1,420 in value (see prize winners list below).

Chas Wolbert has been on a roll. Wolbert entered the night a winner of three straight Bicknell Weekly Series events at Sharon. On Saturday night, Wolbert started fourth and took the lead from Rocky Kugel on lap seven. Wolbert then raced on to become the first driver in Series history to win four straight races at any track! The 25-lap, $600 victory was Wolbert’s first this season in Bicknell Racing Products Touring Series competition, but his fourth of his career putting up on top of the Series’ all-time win list. Wolbert’s five wins this season at Sharon alone have totaled $2,700. Wolbert also won a complete RUSH-legal header and exhaust system from Schoenfeld as part of the “Manufacturers Night” drawings.

“This is crazy,” stated the 24-year-old Warren, Ohio winner. “Four in a row for us and to win a tour race- I can’t believe it. Track was great, my car was great. I had a good starting spot and was patient. I knew I had 25 laps and worked my way up through there and hit every point I needed to hit. We have great competition here. Anyone can win week in and week out. I didn’t see Steve (Slater), but he’s not afraid to run out there (top). Steve is a good driver and if he had a little bit more he would have had me. I’m glad to be back in here in victory lane. Without God none of this or life is possible. I have to thank all of my sponsors and everyone that helps out on the car.”

Rocky Kugel used the outside to race into the early lead past Steve Slater, while Wolbert passed Garrett Krummert for third on the opening lap. Wolbert took second from Slater on lap two then went after Kugel as he caught the leader on lap five. Wolbert would make the winning pass driving around Kugel off turn four on lap seven. Kugel would try to get back under Wolbert in turns one and two, but clipped an infield tire and spun to bring out the first caution with seven laps scored.

Krummert had taken over third from Slater before the caution then inherited second after Kugel’s spin; however, when racing resumed on lap eight the team cars of Slater and Darin Gallagher both passed Krummert for second and third. Wolbert began to extend his lead and pulled away on lap 12 while the battled raged for second between Gallagher, Slater, Krummert, and 10th starting Rob Kristyak.

Kristyak was having his best performance of the season as he passed Krummert for fourth on lap 13. He then took over third from Gallagher on lap 20 before Gallagher got too high smacking the fence and ending his good run with 21 laps completed. That earned Gallagher the TBM Brakes “Tough Brake of the Night” award. Wolbert appeared headed for the win, but Jeremy Weaver lost a wheel in turn four coming down for the white flag, which set up a one-lap shootout to the finish. Weaver’s night wasn’t a total loss as he drew the number one prize during the “Manufacturers Night” drawings of TBM Brakes and brake fluid valued at $1,420.

Slater and Kristyak turned in their season best finishes in second and third. In fact, Slater had yet to finish in the top five at any race this season, while Kristyak’s prior best was a fifth at Expo on July 11.

“He was a little faster than me on the starts- I just couldn’t get back to him,” acknowledged Slater- the 53-year-old Butler, Pa. runner-up. “Believe me, I was trying everything I had at the end. I could see guys down below me, but I didn’t want to give it up so I didn’t stay up there too long. On the restarts I was on the outside so I just gave it a Hail Mary for everything I had- I barely lifted. It was scary, but I kept it off the wall. I have to thank everyone that has helped me this year.”

“It’s been a long time to get on the mic,” expressed Kristyak- the 40-year-old Bristolville, Ohio third place finisher. “We’ve been changing everything on this car every night. Tonight I think we found something and we’ll stick with it. I can’t thank the team enough. I work them hard every night. I want to thank my wife and son along Brandon, Greg, and Scott for helping me out with this car this year. I love this division. I want to thank Sharon Speedway and Vicki Emig for what they’ve done with this division- it’s a really great division. I want to congratulate Chas (Wolbert)- he’s been doing great. It’s a tough. I have a lot of years of experience, but it’s taken all season to get where we are now.”

Krummert, who leads the Bicknell Weekly Series points, was fourth, which was good enough to earn him his first track title at Sharon. Kole Holden earned the $100 Precise Racing Products “Pedal Down” Hard Charger gift card going 15th to fifth. It was Holden’s sixth straight top five finish at Sharon and was the third time in four weeks he’s finished fifth.

Brandon Ritchey, Josh Deems, Brian Schaffer, Gary Haupt, and Brian Sadler completed the top 10. Pat Adams, who was making just his third RUSH Sportsman Modified start and first ever with the Tour,
was selected as the Sherwood Wheels “Man of Steel” recipient. After qualifying just 34th fastest, Adams went fifth to second in the second last chance B main to garner the last feature starting spot then raced from 24th to 18th in the feature.

Rookie RUSH Sportsman Modified racer, Tony Tatgenhorst, made his first ever Tour start and set fast time in $100 Ohio Intra Express “Shock the Clock” Qualifying with a lap of 18.035. Heat wins went to Sadler, Wolbert, Krummert, and Gallagher. Alan Dellinger and Tatgenhorst won the last chance B mains. Slater won the dash to earn the pole for the feature.

“We have to thank all of the companies that supported this night with valuable giveaways,” stated RUSH Director Vicki Emig. “Each year we’ve been able to grow the Manufacturers Night. It’s come a long way from seven drivers sharing in $4,615 of product at the inaugural one back in 2014. To be able to increase the giveaways to over $20,000 and have 38 drivers show up four years later says so much about everyone’s belief in the division.”

The Bicknell Touring Series will resume action for the second and final appearance of the season at Sharon Speedway on September 7-8. Saturday’s feature will pay $800 to-win.