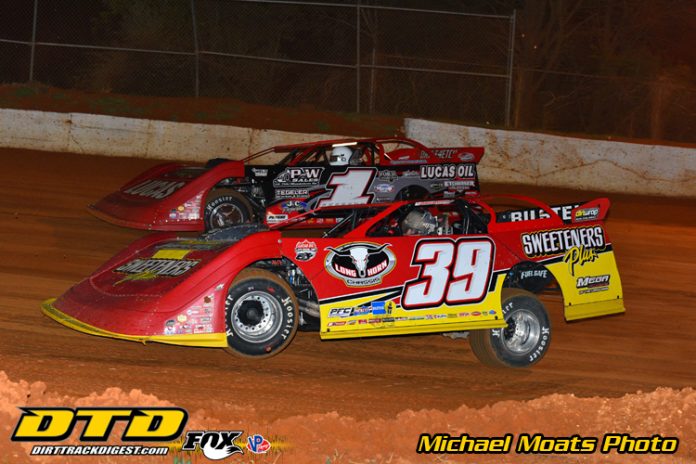 HARTFORD, OH – The 90th anniversary season at Sharon Speedway is set to begin this Friday night (April 12) in a big way. The Lucas Oil Late Model Dirt Series (LOLMDS) will make its third appearance at the 3/8-mile clay oval. The HTMA/Precise Racing Products RUSH Sportsman Modifieds will also be on the card with warm-ups slated to begin at 6:15 p.m.

The LOLMDS boasts a star-studded lineup of racers that will be in competition battling in the $12,000 to-win “Steel Valley 50”. The inaugural “Steel Valley 50” was scheduled to take place in 2016, but Mother Nature washed out that event. In 2017, the first ever Lucas Oil event at Sharon saw Josh Richards pick up the $10,000 win. Last season’s April show was postponed until July and saw Don O’Neal win the increased $12,000 top prize.

Jonathan Davenport heads up the list of 15 full-time competitors headed to Sharon on Friday night. Davenport leads the points as well as the win column with four victories to date. Currently second in points is young Tyler Erb, who has had a breakout season with three victories. Veteran Earl Pearson, Jr. has a victory and sits third in the standings. Devin Moran, who has probably turned more laps at Sharon than any other of the Series regulars, is fourth.

Standout racers like Richards, Tim McCreadie, Don O’Neal, and Jimmy Owens are all in the top nine in points, but are still looking for their first wins of the season. Other full-time LOLMDS racers include one-time 2019 winner Hudson O’Neal along with Kyle Bronson, Billy Moyer, Jr., Jason Jameson, Ryan King, Shanon Buckingham, and Stormy Scott. For more information on the LOLMDS, check out their website at www.lucasdirt.com.

With the World of Outlaws Late Models off this weekend, Brandon Sheppard has Sharon on his schedule. Sheppard leads the WoO in points and with six Series win. The WoO will be at Sharon for two complete shows on August 30-31 in the “Battle at the Border” with $6,000 to-win on Friday night and $15,000 to-win on Saturday night! Sheppard has one LOLMDS victory this season.

Friday’s event is expected to attract a lot of regional talent like ULMS defending champion, Max Blair, who has dominated local Super Late Model and RUSH Crate Late Model competition in recent years. Defending Lernerville Speedway Champion, Michael Norris, earned his first career WoO win last year at his home track and collected a first ULMS victory at Port Royal Speedway on March 24. Norris would love to add a LOLMDS win to his credit. Gregg Satterlee, of Rochester Mills, Pa., is a former full-time competitor with LOLMDS, and is fan favorite throughout the region. Delaware’s Austin Hubbard and Indiana’s Steve Casebolt have stated his intentions to compete at Sharon as well on Friday night.

Rounding out the two-division program will be the HTMA/Precise Racing Products RUSH Sportsman Modifieds, who will run a complete program for $600 to-win along with an increased payoff throughout the field. The championship points race will begin both for Sharon along with the $3,000 to-win RUSH Weekly Series Championship. The RUSH Mods will begin their sixth season of competition at Sharon and fifth as a weekly division. Car counts have grown each year with an average count of 27 last year. Only on two occasions in past three seasons has there been less than 20 cars. Greg Martin, Brandon Ritchey, Kole Holden, and Garrett Krummert are past track champions.

Friday will also kick-off the yearlong “Wheelman” Bonus Event Series presented by C&R Tire and Ohio Intra Express for the RUSH Sportsman Modifieds. Each night, a separate race will be run for RUSH Modified racers that have never won a feature in a full-size car (excluding Mini Stocks). RUSH will also tally a separate points standings for these events that will pay five positions for member racers.

Pit passes will go on sale at 4 p.m. with the main grandstands opening at 5. Warm-ups begin at 6:15 followed by group qualifying for the LOLMDS and then heat race action for both classes.

Reserved tickets are on sale through Thursday night at midnight for $30 by going to www.sharonspeedway.com and clicking on ‘buy tickets’ at the top left of the page. All patio and fan suite tickets are sold out. General admission adult tickets are $30, while pit passes are $40. Children 13 and under, parking, and camping are FREE! Sharon has a no carry-in cooler policy.

The next event at Sharon will be an open practice on Saturday, April 27. Racing resumes on Saturday, May 4 with the “Buckeye Cup” featuring the first of three appearances by Tony Stewart’s Ollie’s Bargain Outlet All Star Circuit of Champions Sprint Cars along with the non-wing RUSH Sprint Cars. Tickets are on sale for this event as well. 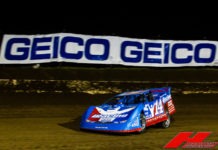 Richards Holds off Thornton to win at Brownstown Friday Night