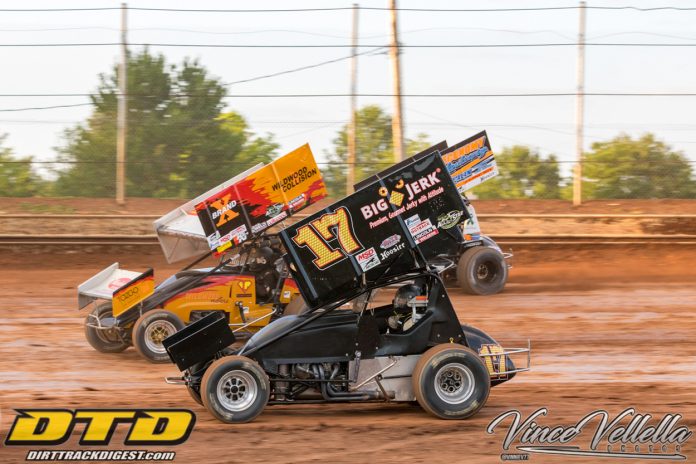 The All Stars will be making their first of three appearances of 2019 at the Hartford, Ohio 3/8-mile red clay oval as they’ll return for Ohio Speedweek on Tuesday, June 18 followed by the $6,000 to-win “Lou Blaney Memorial” on Saturday, July 6. The All Stars opened their 2019 season in Florida with Tim Shaffer winning the first two events at Bubba Raceway Park followed by Series owner, Tony Stewart, winning the finale. World of Outlaws racers Shane Stewart and Brad Sweet won the events at Volusia. Since then, only two point races have been completed with new All Star Cory Eliason winning at Virginia Motor Speedway followed by Lance Dewease at Port Royal.

Heading into this weekend’s $5,000 to-win events at Lernerville and Sharon, the All Stars have suffered five straight rain outs and six of the last seven. Though not competing with the All Stars full-time, Danny Dietrich leads the point chase over the Series’ $50,000 defending champion, Aaron Reutzel. Other drivers competing full-time with the All Stars in 2019 include Eliason, Paul McMahan, Dale Blaney, Spencer Bayston, Brock Zearfoss, Cale Conley, Gerard McIntyre, Jr., Skylar Gee, Greg Wilson, George Hobaugh, Tyler Esh, John Garvin, Jr., and Jim and Mallie Shuster.

Saturday’s appearance by the All Stars will be the 104th all-time at Sharon. Ralph Quarterson won the first event back on July 22, 1970. Kenny Jacobs and Doug Wolfgang lead the win list at 10 victories each. Dave Blaney has won eight All Star races at his home track including the Series’ last appearance at his father’s memorial last year, while brother Dale has six wins. Dale picked up his only feature win in 2018 at Sharon when he won a $3,000 to-win non-sanctioned event on August 11 to run his win streak to 29 straight years. Dale, who has 15 career Sharon wins, would love to make it 30 straight years with a win on Saturday as he’s back competing for an All Star Championship after two years off.

Saturday is also the first of 12 scheduled appearances by the “410” Sprint Cars in 2019. Sye Lynch has taken a liking to Sharon Speedway winning twice over the past two seasons at the track his father, Ed, Jr., still leads the all-time win list at with 50 victories. Jack Sodeman, Jr., a 12-time Sharon winner, won the last two track championships for the Sprint Cars when they ran weekly in 2009 and 2010. Sodeman, like Lynch, and others such as Carl Bowser, Gary Kriess, Jr., Brandon and Brent Matus, have been hitting the road racing throughout Ohio and Pennsylvania before the local season has been able to start up, but are eager to return to Sharon on Saturday night.

Completing the all-Sprint Car program will be the RUSH Sprint Cars racing for $600 to-win. These traditional non-wing Sprints feature the Chevrolet Performance 602 crate engine, $140 sealed/spec Bilstein Shocks, spec Hoosier Tires, and the RUSH “Visual” Methanol. The second year division has 33 events scheduled throughout the region including 11 at Sharon. In 2018, Chad Ruhlman won the Series’ only completed event and went on to win the $5,000 Weekly Series Championship. Around a dozen new competitors are set to join the class in 2019.

Pit passes will go on sale at 3 p.m. with the main grandstands opening at 4. Warm-ups begin at 6:00 p.m. followed by qualifying for the All Stars then heat races for both classes.

Reserved tickets are on sale through Friday night at midnight for $25 by going to www.sharonspeedway.com and clicking on ‘buy tickets’ at the top left of the page. A limited amount of patio seats ($35 each) and fan suite seats ($45 each) are still available for Saturday night. General admission for those 14 and over on Saturday will be $25, while pit passes will be $35 for everyone. Children 13 and under, parking, and camping are FREE! Sharon has a no carry-in cooler policy. Coming up on Saturday, May 11 will be the first of two appearance by the FAST “410” Sprint Car Series racing for $3,000 to-win along with the conclusion of the 2018 “Apple Festival Nationals” that was rained out on September 8 with last chance B mains and features for the Penn-Ohio Pro Stocks ($2,000 to-win), RUSH Sportsman Modified Tour ($800 to-win), and Econo Mods ($750 to-win). New cars are permitted to tag the B mains. Sharon Speedway is owned by the Blaney, Weller, and Kirila Families and is a 3/8-mile dirt track located on Custer-Orangeville Road in Hartford, Ohio near the intersection of Routes 7 & 305. For more information, check out the website at www.sharonspeedway.com or call 330-772-5481. Like us on Facebook at www.facebook.com/sharonspeedway and follow us on Twitter @sharonspdwy. ###