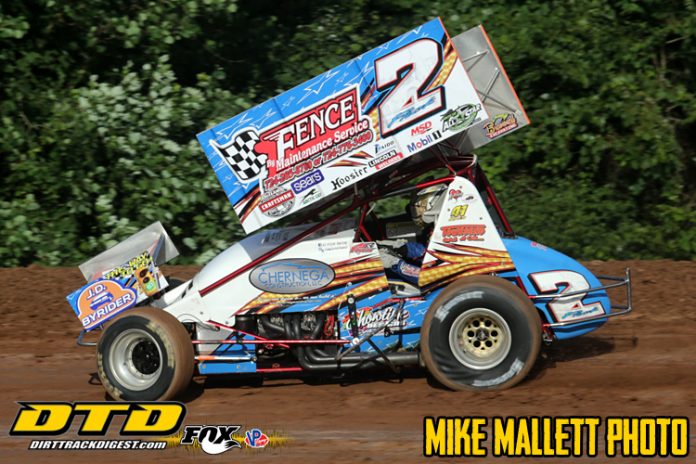 In his six years behind the wheel of a “410” Sprint Cars, A.J. Flick has always seemed to struggle at Sharon Speedway. On Saturday night, the three-time Lernerville Speedway Champion, finally stamped out his first career win at the Hartford, Ohio oval putting a slide job on George Hobaugh to take the lead on lap 19 and went on for the 30-lap feature win. Flick’s victory was worth $3,000 and came over another strong field of Sprints at Sharon with 33 in the pit area. Flick became the 10th straight different “410” Sprint winner at Sharon dating back to last year.

“We were involved in an accident last night and I said on the way here nothing was going to stop me from winning this race,” explained the 26-year-old Apollo, Pa. driver. “This money will help us out from what happened last night. I can’t thank Sharon Speedway enough for what they’re doing to promote 410 Sprint racing and giving us $3000 to race for. This is a big win for my team- the first of the year and first ever here. The track was awesome tonight- it was extremely racey and I hope everyone enjoyed that.”

Hobaugh and Flick led the field to green as the duo battled side-by-side in the opening five laps before a caution for Cody Bova. When racing resumed, Clay Riney flipped to bring out the red. He was okay, but done for the event. Back under green, fourth starting Jack Sodeman, Jr., moved past Flick for second. While Sodeman chased Hobaugh in the race for the lead on the top, Flick went to the bottom to regain second on lap 13.

Hobaugh caught lapped traffic on lap 17 and two laps later Flick would make the winning move in turns one and two with a slide job. A caution for Dan McCarron slowed action for the final time with 22 laps scored. Hobaugh would try a slide job on the restart, but couldn’t make it stick as Flick maintained the lead. Flick would be smooth through lapped traffic as he took the checkered flag first by 2.8 seconds in his Ferguson Heating & AC/Fence by Maintenance Service/Red Robin Gourmet Burgers/Chermega Construction-sponsored #2.

“It’s always easier to be running second here,” added Flick. “George (Hobaugh) had no idea what to do because he couldn’t see where the faster cars were going. The lapped traffic was everywhere. You had to be maneuverable. I think George was probably the best car here and even Jack was good, but once I got passed for second I’m not going to settle. The only chance I had was to see what I had around the bottom. Somehow we got the car good enough to be like that and made up some ground- especially in the middle of (turns) three and four.”

Bobby Whitling came out on top in what was nearly a race-long duel with Jackson Humanic in the 20-lap Gibson Insurance Agency Stock Car feature. Whitling overtook Humanic for good on lap 18 after Humanic got into the fence and went on for his first victory at Sharon in exactly seven years! Whitling’s last win at the track actually came in a Crate Late Model on May 19, 2012. With more than a full field of cars on hand, Whitling’s win was worth $700.

“He was up there running that cushion- I’m too old to be up there,” joked the 46-year-old Franklin, Pa. driver. “I just figured I’d run the bottom and get what I could get. I saw he kept jumping the cushion and was having problems. I just hung in there and it worked out. There’s a lot of good cars here- anyone can win and any given night. The track was great tonight- my favorite place. It had two grooves. There’s so many young guys that are going to be great drivers so it makes it fun racing with them now.”

Humanic kept Whitling at bay for the first five circuits before Whitling took the lead on a restart to lead lap six; however, Humanic regained the lead one lap later. On lap 12, Humanic got sideways allowing Whitling to once again resume the top spot. Whitling held the lead until Humanic drove back by Whitling coming off turn two on lap 14.

On lap 18, newcomer Tyler Wyant spun after making contact with Whitling to bring out the caution. Humanic chose the outside for the restart and would make contact with the fence racing off turn two allowing both Whitling and defending champion, Chris McGuire, to move into the top two positions. Whitling would fend off McGuire over the final three laps by a margin of just 0.103 of a second in his World of Wheels/R&R Enterprises/Precise Racing Products/Hoosier Tire/Genesis Racing Shocks/Jed`s Racing Engines-sponsored #7W. For Whitling, it was the 2000 track champion’s third career Stock Car win and fourth overall at Sharon.

Rob Kristyak not only ended his nearly eight-year winless drought, but also derailed Chas Wolbert’s five-race win streak in the RUSH Sportsman Modifieds, which dated back to last season! Kristyak passed Kole Holden on lap 12 and held off Wolbert over the final two laps to score the 20-lap HTMA/Precise Racing Products-sponsored feature win- his first at Sharon since July 12, 2011 in a Big-Block Modified.

“It was a good race,” acknowledged the 40-year-old Bristolville, Ohio driver. “These guys race clean in this division and there’s a bunch of good racers and a lot of young guys. We’re working on this new car and have some bugs to work out of it. We finally brought a good car to the table now. We have a real good crew, my wife allows me to do this, and we have fun. I have to thank everyone that helps out, my sponsors, and Sharon Speedway.”

Tony Tatgenhorst raced out to the early lead in search of his first career win. Tatgenhorst held the lead until lap seven when a lapped car allowed Holden to take charge. Tatgenhorst then felt pressure from Kristyak, who would make the pass for second on lap nine. The race was slowed with 11 laps completed when newcomer Joe Gibson hit an infield tire to bring out a caution.

Back under green, Kristyak got a great restart and made the outside work to take the lead on lap 12. The two battled for a couple laps until Kristyak pulled away. Wolbert, who started 11th, made his way to third and finally worked his way by Holden for second on lap 19. Wolbert would run out of time as Kristyak took the checkered flag first for his 12th career win overall at Sharon by a margin of 1.951 seconds in his Mark Thomas Ford/Classic Auto Glass/Wedge Motorsports/Bristol Disposal/Texas Roadhouse/T&C Automotive/C&R Tire-sponsored #00.

The new RUSH Sportsman Modified “Wheelman” Non-Winners race presented by Ohio Intra Express and C&R Tire debuted on Saturday night for drivers that have never won a feature event in a full-size race car. Eight of the eligible 14 drivers took the green for the eight-lap race, which saw David Kalb, Jr. victorious. After finishing fifth in the regular feature event, Kalb led the entire caution-free event by 1.406 seconds over Tatgenhorst. The 17-year-old Aurora, Ohio driver earned $75 for the win in his Frankland Rear End/Newbury Tire-sponsored #11J. Third through fifth were Jacob Jordan, Greg Porter, and Cameron Nastasi.

They always say the first win is the hardest. After trying for years to break into victory lane at Sharon Speedway, Ty Rhoades finally accomplished the feat on July 28 of last year in the Econo Mods. Rhoades would add another victory in the 2018 season finale and on Saturday night was back in victory lane in 20-lap Summit Racing Equipment feature for the third time in the past six events!

“This is a 1992 throwback car to the Super Late Model my dad had that he won the track championship with,” revealed the 28-year-old Pittsburgh, Pa. resident. “My parents always liked green and purple so I left it up to the lettering guy and it came out green. They say green is bad luck, but we’ll see how it goes. We’ve been fighting some gremlins, but I can’t thank everyone on my team enough. They’ve been busting their butts. David Stremme with Lethal Chassis and Dan Davies have been helping me out behind the scenes. I’m so blessed to have so many people on this car helping me, and my family behind me.”

Rhoades started third and took the lead on the opening lap. Rhoades would survive several cautions including one that collected nearly half the field when outside pole-sitter Andy Buckley got sideways. Rhoades’ third career win came by a winning margin of 1.609 seconds in his Bloom Machineworks/Trace Lawn & Landscaping/A&MP Electric/Talbar Inc./Dirt Rhoades Logging/Village Auto/Smokey Martins BBQ/Weldbark Energy-sponsored #12R.

Bud Watson started 15th and made his way to second at the finish with his new GM 602 crate engine. Wayne Tessean, who is subbing for Alan Dellinger until he recuperates from offseason surgery, drove Bob Williams’ #7 from the 13th starting position to third at the finish. Buckley was fourth as Nate Young completed the top five. Heat victories went to Rhoades, Buckley, and Young over the 23-car field.

Coming up this Saturday night (May 25) will be the first appearance of the season by the Hovis Auto & Truck Supply Big-Block Modifieds in a Menards “Super Series” event. The winner will receive a guaranteed starting spot for the July 30 Super DIRTcar Series event. Also on the card will be the RUSH Sprint Cars, RUSH Sportsman Modifieds, Econo Mods, and Junior Sprints. It’s Twin-State Auto Racing Club Night. Race time is 7 p.m.