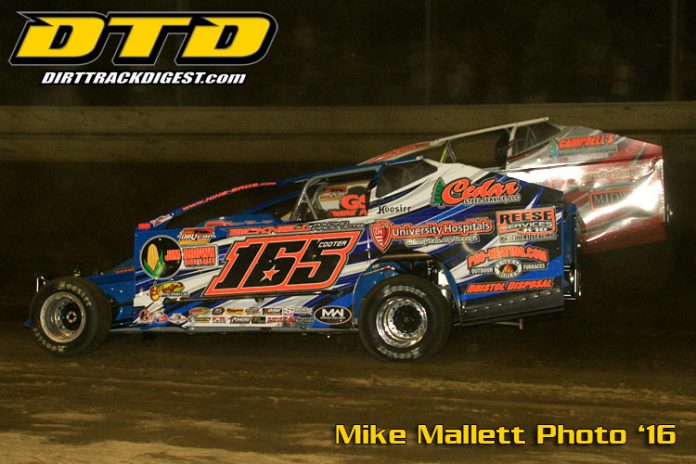 HARTFORD, OH – Sharon Speedway will look to make it three in a row this Saturday night (May 25) as the 90th anniversary season rolls on. The Hovis Auto & Truck Supply Big-Block Modifieds and the non-wing RUSH Sprint Cars will make their visits of the season as part of the Menards “Super Series” program. Also on the card will be the Gibson Insurance Agency Stock Cars, HTMA/Precise Racing Products RUSH Sportsman Modifieds, Summit Racing Equipment Econo Mods, and the Junior Sprints for kids. It’s Twin-State Auto Racing Club Night with free general admission or half off pit admission for card-carrying members. Race time is 7 p.m.

Rex King, Jr. leads the contingent of ground-pounders back to Sharon for their first of four visits of 2019. King, Jr. captured three of the last four track championships for the Big-Block Modifieds at Sharon and owns 25 career wins at Sharon. “Cooter” is off to a fast start this season winning three races on the circuit. His father Rex is the top active winner in the division with 54 victories. Other expected challengers include Dave Murdick, Will Thomas III, Garrett Krummert, Jim Rasey, Jeremiah Shingledecker, and others. Saturday’s 25-lap feature winner will also receive a guaranteed starting spot for the July 30 $7,500 to-win Super DIRTcar Series event.

The RUSH Sprint Cars will try once again to get their first show of the year in at Sharon on Saturday night. Eighteen of the non-wing cars were on hand before the rain came on May 4. In their only completed race of 2019, defending $5,000 Series Champion, Chad Ruhlman, scored the win at Pittsburgh on May 11. Ruhlman won last year’s only completed appearance at Sharon, while the “Apple Fest” event was rained out while the feature was on the track and the racers split the purse. The Ruhlmans are big supporters of the division as Chad’s son Kevin is now driving his car from last year and Chad’s brother Brian, a big Late Model and Modified winner, entered the class late last year.

Veteran racer, Bobby Whitling, ended a seven-year winless drought at Sharon taking the Stock Car win last Saturday night. Whitling had a big battle with fellow Venango County, Pennsylvania racer, Jackson Humanic, then held off defending track champion, Chris McGuire, for the $700 payday thanks to more than a full field of cars on hand. Whitling, the 2000 Gibson Insurance Agency Stock Car Champion on the old half-mile track, now has the early points lead. Full field plus car counts not only mean the highest pay structure, but drivers that do not qualify for the feature also receive a pit pass in addition to their tow money for the three weekly divisions.

There was a new face in Hovis Auto & Truck Supply victory lane in the RUSH Sportsman Modified division last Saturday night. After racing to a runner-up finish the week before in the 2018 “Apple Festival Nationals” Touring Series make-up feature, Rob Kristyak ended Chas Wolbert’s five-race win streak that dated back to last season. The former Big-Block Modified racer hadn’t won at Sharon since 2011 and has now settled in well in his second year behind the wheel of the cost-contained RUSH-sanctioned division. A few new racers made their way to Sharon last week as the HTMA/Precise Racing Products-sponsored division continues to produce strong car counts. David Kalb, Jr. will go down in history as the first winner of the “Wheelman” event for non-winners as he picked up the $75 and the early points lead for that RUSH program.

Ty Rhoades has quickly become the driver to beat in the Econo Mods. After struggling for years to break into victory lane at Sharon, Rhoades has now won three of the last six feature events dating back to last season for the Summit Racing Equipment-sponsored division. The Econo Mod class has featured seven different track champions in its nine-year existence. Only last year’s champion, Jacob Eucker, is planning on competing for the championship as Rhoades and others look to become the eighth different champion in year number 10.

Pits are open throughout the afternoon on Saturday with pit passes going on sale at 4 p.m., while the main grandstands open at 5. Heat races are scheduled for 7 p.m. Grandstand admission for those 14 and over is $13, while senior citizens are $10. Patio seating upgrades are just $5 and fan suite seating upgrades are just $20 over the cost of general admission. In order to reserve either of these ahead of time, call the office Monday through Thursday from 10 a.m. to 2 p.m. at 330-772-5481. As always, children under 14 and parking are always FREE! Pit passes are $30. As a reminder, coolers nor outside food or beverages are not permitted.

Coming up on Saturday, June 1 will see the “410” Sprint Cars return for another $3,000 to-win show part of the Menards “Super Series”. Also on the program will be the RUSH Sprint Cars, RUSH Sportsman Modifieds, Elite Econo Mod Series, and power wheels racing for the kids. Race time is 7 p.m.