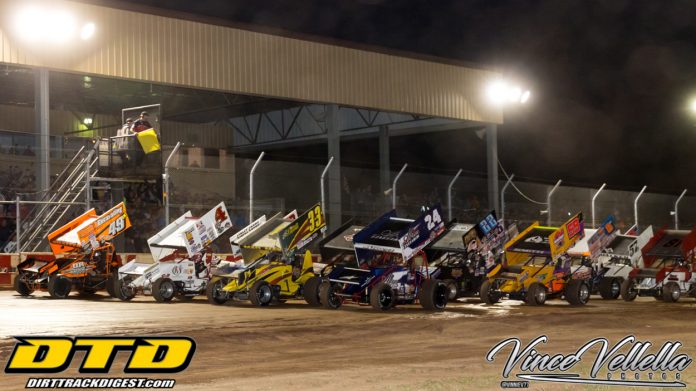 HARTFORD, OH – For the first time in event history, Justin Snyder’s Salute to the Troops program, an event honoring one of open wheel racing’s most loyal and dedicated supporters – the late Justin Snyder – as well as a benefit for the Wounded Warrior Project, a charity and veterans service organization that offers a variety of benefits for wounded veterans of the military actions following September 11, will uproot from Pennsylvania and move to northeast Ohio’s Sharon Speedway in 2020, officially padding a must-see weekend that now feature’s the 12th Annual Lou Blaney Memorial and Salute to the Troops on back-to-back days, each sanctioned by the Ollie’s Bargain Outlet All Star Circuit of Champions presented by Mobil 1.

The fifth annual Justin Snyder’s Salute to the Troops event, awarding a $6,000 top prize, will be contested on Sunday, July 12, immediately following the $6,000-to-win Lou Blaney Memorial on Saturday, July 11.

“After four successful years in Central PA, we are extremely excited to bring Justin Snyder’s Salute to the Troops race back home to Sharon Speedway,” Derek Snyder explained, older brother of the late Justin Snyder and the Executive Manager & Partner of Sweeney Chevrolet Buick GMC. “My family’s passion for racing began at Sharon Speedway. My earliest memories are my brother and I attending our father’s company picnic hosted at Sharon Speedway during the Sharon Nationals, then camping out with our aunts, uncles, and cousins in the parking lot. Our father supported the track with pace cars and sponsorships clear back to the mid-80’s. Snyder Pontiac Buick GMC Cadillac also sponsored Lou Blaney for several years. So, having the privilege to host Justin’s race the same weekend as the Lou Blaney Memorial is an incredible honor.”

Justin Snyder’s Salute to the Troops program was hosted at BAPS Motor Speedway in York Haven, Pennsylvania, during its first four editions before making the switch to Sharon Speedway. The All Star Circuit of Champions sanctioned editions two through four with Gerard McIntrye, Jr. winning the most recent contest in 2019. Three-time NASCAR Cup Series champion Tony Stewart won the event title in 2018, with the late Greg Hodnett winning the first Salute to the Troops event with All Star involvement in 2017. Danny Dietrich, Central PA’s defending sprint car champion, earned the inaugural, unsanctioned event victory in 2016.

“It just seemed very fitting for me to keep this going by bringing the race to Sharon Speedway. This is something I believe my brother would be incredibly proud of,” Derek Snyder continued. “I’m so grateful for our family’s relationship with Lou and Kate Blaney over the years. I wanted to be certain that I had Kate’s blessing prior to even considering this move and date. Thankfully, she obliged and here we are. I want to thank Jared of the All Stars for the Series’ support, as well. This race has really taken on a life of its own, especially when you look at the past winners including Danny Dietrich, Greg Hodnett, Tony Stewart, and Gerard McIntyre, Jr. I encourage all of our friends and family, including our Central PA racing family, to join us in keeping Justin’s memory alive as we honor our nation’s bravest!”

More news and information pertaining to Justin Snyder’s Salute to the Troops program, such as gate times and ticket prices, will be posted in the near future. Fans are encouraged to stay alert online at www.sharonspeedway.com, as well as on all available social media outlets.