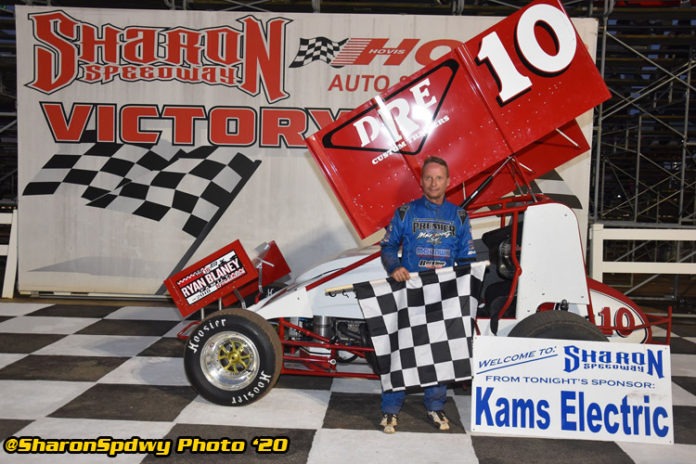 HARTFORD, OH – After losing two months of the season due to the COVID-19 pandemic, Sharon Speedway was finally able to swing open its gates with eager race fans on Saturday night for the 2020 season opener. Despite a high likelihood of thunderstorms throughout the afternoon and evening, all of the storms stayed south allowing the 91st anniversary season opener to go off without a hitch. Celebrating in the Hovis Auto & Truck Supply victory lane on Kams Electric Night were Dave Blaney-Hovis Auto & Truck Supply “410” Sprint Cars, Jeremy Weaver-RUSH Sprint Cars, Chas Wolbert-HTMA/Precise Racing Products RUSH Sportsman Modifieds, and Dustin DeMattia-Elite Econo Mods. The new infield fan zone debuted to rave reviews.

Driving a tribute throwback scheme to his father’s #10 in his first “410” Sprint Car start of 2020, Dave Blaney shot from the third starting spot into the lead on the opening lap past Michael Bauer and A.J. Flick and never looked back in the 30-lap feature. The 57-year-old hometown Hartford, Ohio native and a co-owner of the Speedway, set a blistering pace lapping up to the fifth place car to earn the $3,000 payday. The National Sprint Car Hall of Famer’s 32nd career “410” win and 35th overall at Sharon was preparation for the two-day All Star Circuit of Champions “Lou Blaney Memorial” and Justin Snyder “Salute to the Troops” events on July 11-12 that will close out Ohio Speedweek.

Trailing Blaney by 5.816 seconds was fourth starting George Hobaugh, who got past Flick at the finish after a race-long battle for second. Ironically, two years ago at the “Lou Blaney Memorial” Hobaugh finished runner-up to Blaney for his best career All Star finish. Flick was third with Brandon Spithaler advancing four spots to finish fourth. Carl Bowser raced from eighth to fifth as Bauer dropped to sixth over Dan Kuriger. Adam Kekich advanced from 16th to eighth as the father-son duo of Brent and Brandon Matus completed the top 10. Heat winners were Blaney, Hobaugh, and Flick. Flick set fast time overall against the 22-car field in qualifying with a lap of 15.542.

On July 2, 2018, Jeremy Weaver won his first career Sharon RUSH Sportsman Modified feature. Two years later, the second year RUSH Sprint Car racer put on a dominating performance winning his first ever Sharon non-wing Sprint victory by a comfortable 6.257 seconds margin in the 20-lap feature. Like Blaney, Weaver went from the third starting spot into the lead on the opening lap and never looked back.

Multi-division standout and last year’s Jim Bickerstaff Memorial Cup Outlaw Mod Champion, Brian Ruhlman, continues to be the bridesmaid in RUSH Sprint Car action. Ruhlman ended last year finishing second in the season finale at Lernerville, which came after a pair of back-to-back runner-up finishes at Sharon. Ruhlman has been so close to his first career RUSH Sprint win. Brandon Blackshear finished third with fourth going to Zach Morrow. Steve Pedley crossed the finish in fifth, but failed to scale which moved Andy Feil into the top five. Alan Dellinger, who is the track’s all-time winningest E-Mod and Stock Car driver and has victories in several other divisions, made his RUSH Sprint debut and finished sixth for car owner Bob Williams. Feil and Morrow won the heat races.

Last season Chas Wolbert won four feature events to become the all-time winningest driver in the six-year history of the RUSH Sportsman Modified division at Sharon. On Saturday night, Wolbert got the 2020 season off to a fine fashion winning the 20-lap HTMA/Precise Racing Products feature. It was the 25-year-old Warren, Ohio racer’s 14th career Sharon win as he earned $500 with more than a full field of cars on hand.

Twenty-seven time Sharon Big-Block Modified winner, Rex King, Jr., was making his first RUSH start at the track and just his second ever in the division and raced to the early lead. The third generation driver set the early pace leading the first five circuits before fourth starting Wolbert made his winning pass on lap six. Wolbert went on to win by a margin of 1.267 seconds in his Alcon Mechanical/Dunkin Donuts of Warren, OH/C.T. Wolbert Trucking/Walters Building Co./Ohio Intra Express/Russ King Racing/Sawtelle Tree-sponsored #c3.

King, Jr., who finished second in his only other RUSH start in last season’s Lernerville finale, was second ahead of Friday night’s Raceway 7 winner Garrett Krummert. Wolbert and Krummert are now tied for the points lead in the “Route 7 Rumble” Series presented by Wedge Motorsports after one weekend of racing at Raceway 7 and Sharon. Rob Kristyak and Tony Tatgenhorst were fourth and fifth. Brandon Ritchey was a big mover going 21st to 11th. Josh Deems, Wolbert, and Jim Rasey won the heat races over the 25-car field.

Dustin DeMattia won two of the final six Econo Mod races in 2019 in route to track championship. On Saturday night, the third year racer showed he’s the driver to beat to beat as he captured the opening night Elite honors. The 22-year-old Montville, Ohio driver started third and made the winning pass on lap 10 taking the lead from race-long leader Nate Young.

Coming up on July 11-12 will be the conclusion of Ohio Speedweek for the All Star Circuit of Champions Sprint Cars competing in a full show each night for $6,000 to-win. Saturday the 11th will be the “Lou Blaney Memorial” presented by Premier Pallet & Recycling and will also include the BRP Modified Tour for $2,000 to-win, while Sunday the 12th will be the Justin Snyder “Salute to the Troops” and will also include the RUSH Sprint Cars for $600 to-win. Tickets are on sale at the following link https://sharonspeedway.simpletix.com or by clicking ‘buy ticket’ at the top of the home page.