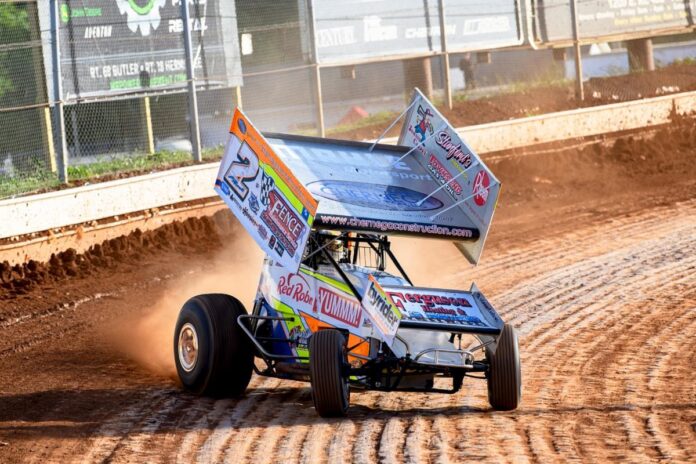 After two rainouts to start Western PA Speedweek, A.J. Flick backed up his Friday night Lernerville Speedway win with a second $3,000 payday in as many nights. Flick passed George Hobaugh on lap 15 and was never challenged over the second half of the 30-lap Hovis Auto & Truck Supply “410” Sprint Car feature. It was just Flick’s second career Sharon win and first since May 18, 2019 for the 25-time Lernerville winner.

“Man I wanted that one- this is pretty cool,” acknowledged the 29-year-old Apollo, Pa. third generation driver. “George (Hobaugh) is the guy to beat on something like this. Freakin’ Ryan Smith comes from the middle of the pack to second again; he can’t give me a break. We usually struggle a bit when the track gets slick like this, but there’s something we’ve been playing with and the car feels really good. I have no idea how big of a lead I had, but I felt comfortable the entire race. I honestly had a much better car at the beginning than I was playing around with. I was biding my time and I didn’t want to make a stupid mistake when they greased the track when it had a little bit of water on it.”

Hobaugh raced out to the early lead over Sye Lynch, Darin Gallagher, and Carl Bowser. By lap three, Hobaugh began to stretch out his lead, but that lead was erased with Oklahoma teenager Ryan Timms got into Dan Kuriger entering turn three with both cars getting upside down. Both drivers were okay, but done for the event. When racing resumed on lap five, Gallagher and Flick both passed Lynch for second and third respectively.

Hobaugh was setting a torrid pace out front and by the time he caught lapped traffic on lap 10 had stretched his lead to 1.5 seconds. Flick began to pressure Gallagher for second on lap 12 and the duo caught Hobaugh in lapped traffic on lap 13 making it a three-car race for the lead; however, Kyle Colwell slowed to bring out the caution with 13 laps scored.

When green replaced yellow on lap 14, Flick passed Gallagher for second and then went after Hobaugh. Flick got a big run off the top of turn two on lap 15 and pulled a slingshot move to pass Hobaugh going down the backstretch. Meanwhile, all eyes were on 14th starting Ryan Smith. Smith, who won last year’s events at Lernerville and Sharon and went on to win the title, moved by Bowser for fourth on the restart then drove under Gallagher for third on lap 20. Smith ran down Hobaugh on lap 23 and after a side-by-side battle over the next three laps finally made the pass stick for runner-up on lap 26.

By the time Smith got to second, Flick had more than a four-second advantage. Smith would run out of laps as Flick took his Ferguson Heating & Air Conditioning/Fence by Maintenance Service/Red Robin/Chernega Construction-sponsored #2 to the win by 3.323 seconds. It was Smith’s second runner-up to start Western PA Speedweek after going 13th to second on Friday night.

Hobaugh, who led the first 28 laps of the April 30 All Star Circuit of Champions feature before dropping to fourth, slipped back to a disappointing third on Saturday night after leading the first 14 laps. Gallagher was fourth. Eighteen-year-old Florida native, Conner Morrell, raced from 12th to fifth in his first Sharon start. Completing the top 10 were Bowser, Dan Shetler, 17th starting Adam Kekich, Brett Brunkenhoefer, and 23rd starting Danny Peebles. For Peebles, in his first Sharon start, the New York driver earned the $333 Knox Bakery Hard Charger honors for the second straight night!

Shetler set fast time overall against the 33-car field in qualifying with a lap of 15.499 to earn $500 from Knox Bakery. Heat race winners were Shetler, Hobaugh, Bowser, and Lynch, while Brent Matus copped the last chance B main.

“I never thought I would be here,” expressed the 33-year-old Brookfield, Ohio racer. “I won a few in the two-barrel E-Mod then sold everything. My dad got diagnosed with cancer and was being a hard head and didn’t want to go through chemo so I made a deal that we’d go back racing if he did. I bought a car, he went through all his chemo treatments and is doing good today so it’s cool to get our first win here. My mom never comes to the races and she’s here tonight. Doug Kekich has helped me a lot. He couldn’t be here tonight, but he’s helped me a lot in the pits and I call him a lot running things by him.”

Veterans Andy Priest and Ruhlman led the field to green as Priest nosed ahead to lead the opening circuit; however, Ruhlman was flying along the fence and powered into the lead off turn four on lap two. Priest moved to the top to try and follow Ruhlman’s fast line, but lost second and third to Fraley and Brian Hartzell on laps four and five respectively.

Fraley began to close on Ruhlman every lap and caught the leader on lap eight. The two raced side-by-side over the next two laps with Fraley taking the lead after Ruhlman brushed the turn two fence. Ruhlman stayed within striking distance in the ensuing laps. Fraley was mired in heavy lapped traffic on lap 14, but made the right moves as he broke away from Ruhlman. Fraley continued to pull away in the final laps to take his ninth career Sharon win by a margin of 3.550 seconds in his Barris Truck Service/Intense Fab/Pruskowski Trucking-sponsored #12.

Ruhlman, who has seven career wins in the divisions at Sharon, was second. After finishing a Sharon career best fourth in the final race of 2021, Hartzell did one better with his first podium finish at the track after starting sixth. Blaze Myers was fourth after passing Priest on lap 12. Priest dropped to fifth. Nolan Groves, Gale Ruth, Jr., John Mollick, Arnie Kent, and Jarod Larson completed the top 10. Heat race winners were Priest, Ruhlman, and Fraley.

“I was hoping he’d (Holden) slip off the bottom in lapped traffic,” explained the 40-year-old Sharpsville, Pa. resident. “A couple times I thought I could get under him, but didn’t want to push the issue too much. When he opened the door, I took advantage. I always try to keep it as clean as possible, but sometimes when it’s slippery like this it’s hard, but I thought we kept it clean tonight.”

Holden and Brandon Ritchey led the 23-car field to green with Holden taking the lead over Ritchey, while Clayton Deems passed Jacob Wolfe for third. Shea dropped Wolfe back another spot when he moved into fourth on lap four. Holden meanwhile began to pull away on lap five; however, the lead was erased when back-to-back cautions with seven laps completed occurred.

When racing resumed on lap eight, Shea passed Deems for third then one lap later passed Ritchey for second. Shea ran down Holden and was on the leader on lap 14. Holden continued to keep Shea at bay, but coming out of turn four for the white flag, Holden hesitated in traffic allowing Shea to slip under for the winning move. Shea’s third career Sharon win came by 0.624 seconds in his Shea Trucking/John Flynn Funeral Home/Dot Lou’s the Wings of Time Part 2-sponsored #14s.

Will Thomas III ran his win percentage in the Econo Mod division to 75% by winning his sixth feature in eight tries over the past two seasons. Thomas passed Jacob Eucker on lap two and held off Jeremy Double over the final 13 laps for his first win in the division in 2022. With more than a full field on hand, Thomas earned $450 for the 20-lap Whelen feature victory.

“Our car was really good early on,” explained the 46-year-old Sharpsville, Pa. driver. “This place gets really, really slippery. I spent a lot of my years racing on asphalt circles opposed to dirt circles so it kind of helps me. There’s a lot of good cars in this division. I know Jeremy Double was right there and he’s really good. You have Mitch Wright, and Jake Eucker has won a pile of races here. We’re just fortunate. We live five minutes away and we love coming out here. I appreciate all of the fans staying.”

After Thomas took over the top spot on lap two, the event’s first caution was displayed. When racing resumed on lap three, it was three-wide for runner up with Eucker maintaining the spot, while sixth starting Double edged ahead of Mitchell Wright. Eucker and Double then raced side-by-side on lap five with Double taking the spot. Double caught Thomas on lap seven and was all over the leader on laps eight and nine.

Double had two shots alongside Thomas on the double-file restarts, but was unable to make the pass as the opening night winner came up 0.993 seconds shy. Thomas’ victory was his 25th career overall at Sharon and came in the Hallman Originals/Colonial Metal Products-sponsored #9. Garrett Calvert charged from the 23rd starting spot to pass Eucker on lap 15 to finish third and earned a $100 gift card from Summit Racing Equipment for being the hard charger.

There will be no racing next Saturday night (June 11); however, Ohio Speedweek for the Tezos All Star Circuit of Champions Sprint Cars will make its annual stop at Sharon on Tuesday, June 14 for a $6,000 to-win event along with the Terry Bowser Excavating RUSH Sprint Cars. Advance and reserved tickets are on sale through the following link https://sharonspeedway.simpletix.com/