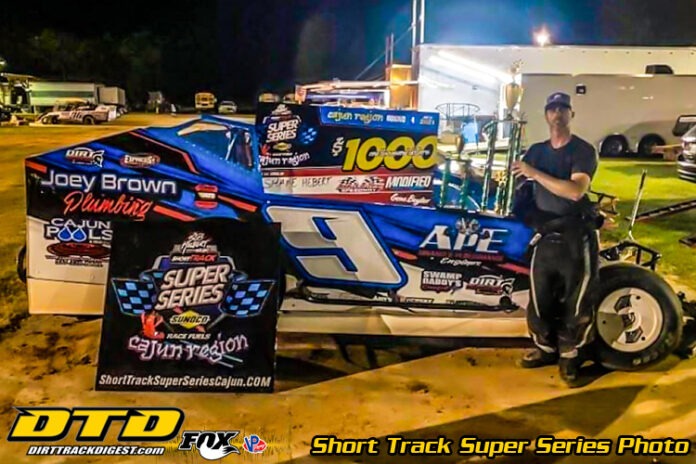 Hebert, making his first 2021 start with the series in a Hightower family backed No. 9, earned $1,000 for his efforts in the 20-lap feature at Gene Boyter’s quarter-mile, D-shaped facility.

With Hightower now sidelined due to injuries sustained at Georgetown (Del.) Speedway in May, Hebert was called upon to wheel the renumbered ‘9’ car in the Cajun Region.

The Lafayette, La., driver made his first start of the season count, joining Cody Robbins, Tommy Rascoe and Caleb Dillard as winners on the series in ’21.

Hebert led the event from start-to-finish after picking the pole in the pre-feature redraw.

Point leader Caleb Dillard of Many, La., drove from fifth to finish second in the Tim Bates Painting No. 18. Tommy Rascoe of Converse, La., Red Oak, Texas native Jon White in his first start of the season and Greg Dillard of Robeline, La., completed the top five.

Heat winners were Dillard and Hebert for the season-high 16 cars in attendance.

The next event for the STSS Cajun Region is Saturday, July 17 at Jerry Hobson’s Chatham Speedway in Chatham, La., Round No. 5 of the Day Motor Sports point series.