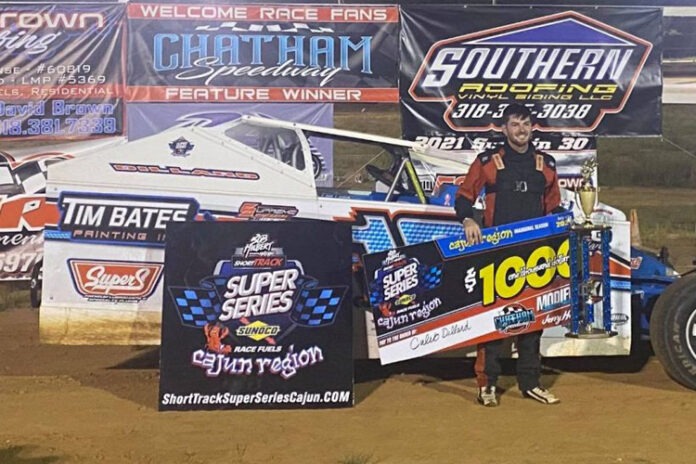 The Many, La., driver picked up the $1,075 payday by inches in a photo finish that was decided by the speedway’s transponder system.

Dillard launched off the outside pole to take the lead at the outset. Shane Hebert, who took the green in third position, worked to the outside to take the runner-up spot on the third tour of the quarter-mile oval.

Hebert spent the remainder of the main event chasing Dillard as the pair diced through lapped traffic.

After an extended nose-to-tail battle on a slick racing surface, Hebert made his move coming to the checkered flag.

Working the top groove, Hebert built momentum on Dillard, who was momentarily slowed behind another car. Hebert drew even with Dillard as the pair raced under the checkered flag.

Officials went to the transponder system to determine the winner and sent Dillard’s TCB Motorsports No. 18 to Victory Lane.

Dillard, the series point leader, previously won at Chatham on May 29.

Hebert, of Lafayette, La., placed second in the Brandon Hightower-fielded No. 9, followed by David Forbis of Bossier City, La., Richard Holt of McLeod, Texas and Tommy Rascoe of Converse, La.

The series returns to action next Saturday, July 31 at Derek Perkins’ Thunder Valley Speedway in Glenmora, La., for Race No. 6 of the Day Motor Sports point series.