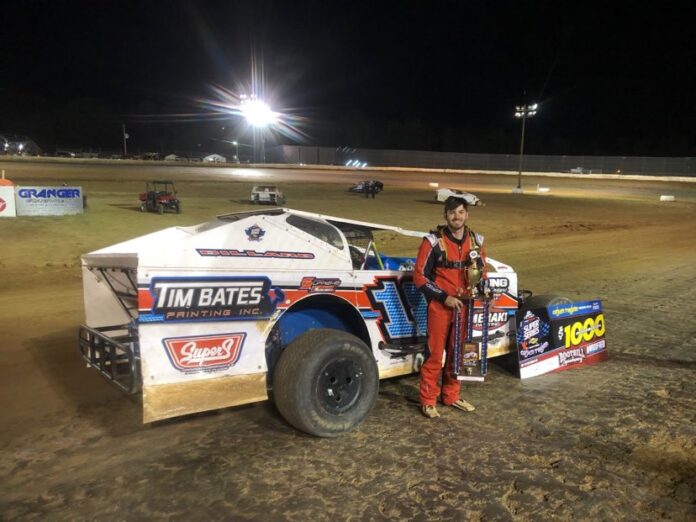 GREENWOOD, LA – With some good fortune on his side, Caleb Dillard broke into the win column on Saturday night at Boothill Speedway.

Dillard bested a strong 21-car field – the largest to date – for the Bob Hilbert Sportswear Short Track Super Series Fueled By Sunoco ‘Cajun Region’ in Round No. 2 of the Day Motor Sports point series.

The STSS Modifieds took part in their first points-paying event at Boothill before a packed grandstand during the track’s milestone 50th anniversary season.

“This is awesome to see such a good field of cars here and the fans coming out to support us,” Dillard said. “We’re really trying to get this class going. It’s a blast; probably the most fun I’ve ever had in a race car.”

The 20-lap main event produced its share of drama.

Pole starter Keith Badiali led the opening 11 laps of the main event on the high-banked quarter-mile oval, while Dillard, Tommy Rascoe and Koty Adams swapped positions behind him.

Adams, who started sixth, drove into the lead with a slide job on lap 12, with Rascoe and Dillard in tow.

The race’s complexion changed on the 14th lap when a tangle in turn two drew the caution. After the ensuing restart was nixed by series starter David Corbelo and the yellow lights were on, Adams’ Frank Lofton-owned No. 4X ended up on its side in turn one. He was uninjured.

Rascoe inherited the lead over Dillard.

“I don’t know what happened to Koty,” Dillard said. “I didn’t even know I was second (after Adams’ incident). It was a shock to me.”

When the green appeared, Rascoe’s No. R21 broke loose in turn four, allowing Dillard to sweep into the lead.

“Tommy (Rascoe) must have spun his tires (on the restart),” Dillard said. “And I got going pretty good.”

Dillard survived one more yellow during the race’s late stages to take home the $1,000 payday for his TCB Motorsports team.

“My car was really free,” Dillard said, after at one point fading to fourth-place mid-race. “I caught some lucky breaks at the end. Sometimes you’ve gotta be lucky.”

Rascoe, of Converse, La., narrowly held onto second at the finish, fending off the challenges of Waxahachie, Texas resident Kodey Keimig, who drove forward from 10th. The father-and-son pair of Richard Holt (Atlanta, Texas) and Thomas Holt (McLeod, Texas) filled out the front five after starting fourth and seventh, respectively.

Heat winners for the 21 cars on hand were Richard Holt, Rascoe and Dillard.

BOOTHILL BITES: Boothill Speedway’s promotional team took advantage of the big crowd to announce the Greenwood, La., facility will host the ‘Cajun Swing’ finale paying $20,000 to win on Nov. 12 paying $20,000 to win. The event had been scheduled for The Rev in Monroe, La., which has apparently hosted its final event as a dirt track…

Two of the 21 cars were unable to start the main event: New Yorker John Lutes in the Joe Boswell-owned No. 42X with battery issues and Cody Robbins due to rear-end failure…

The 21-car field was a new high for the series in its second season. The previous high was an 18-car field at Big O Speedway (Ennis, Texas) last August…

The Short Track Super Series Cajun Region Day Motor Sports point series moves to Thunder Valley Speedway in Glenmora, La., for Round No. 3 of the 2022 season on Saturday, May 14. 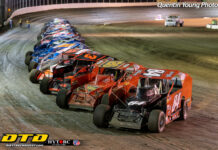