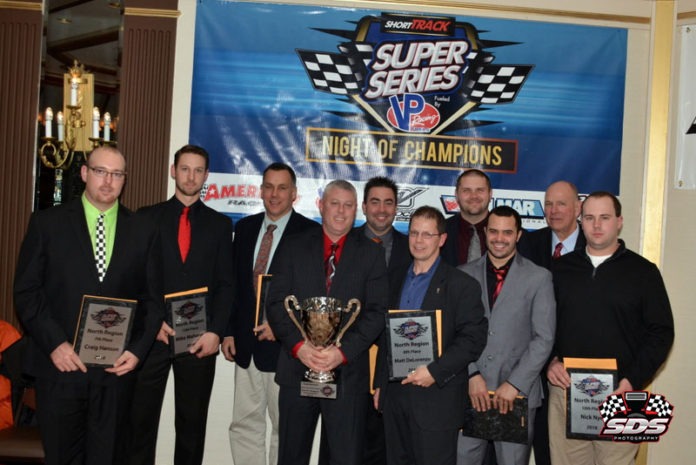 BETHLEHEM, PA – Many of the Northeast’s most talented competitors gathered at the Lehigh Valley Hotel & Conference Center Friday night to close the curtain on the 2016 Bob Hilbert Sportswear Short Track Super Series Fueled By VP campaign.

A massive $65,600 point fund was distributed to the top-12 drivers in the Halmar International North Region, top-10 Velocita USA South Region performers and champions of the Open Sportsman and XCel 600 Modified mini-series during the annual ‘Night of Champions’ Awards Banquet.

STSS organizer Brett Deyo opened the evening with some astounding numbers. During the recently completed season, the STSS distributed $390,025 in purse money, $13,875 in lap money, $9,251 in bonus money plus the aforementioned $65,600 point fund and assorted product and certificates. He thanked all those in attendance for the all-time high participation.

For the second time in three years, Sheffield, Mass., star Andy Bachetti was recognized as a champion on the Short Track Super Series. Bachetti topped the nine-race Halmar North Region and picked up $12,000 in cash plus product awards for his efforts.

During the season, Bachetti achieved five finishes inside the top-five, including a best of second on two occasions (N.Y.’s I-88 – July and N.Y.’s Thunder Mountain – September). He clinched the title with a third-place finish in the Short Track SuperNationals at I-88 in October.

“I can’t say enough about the Short Track Super Series, American Racer and all the series sponsors that allow us to run for this type of money,” Bachetti said. “It’s incredible to walk out of here tonight with $12,000 for nine races.

“We had a good year, a consistent year, on the series. I would have liked to end it with a win at I-88 in the SuperNationals, but we did what we needed to do to clinch the championship, that was the big goal for us.”

Tommy Meier of Waldwick, N.J., finished second in the standings, his best effort to date in the STSS with Jeff Behrent’s No. 3 and received $7,000 in point fund money. Meier won the opener at Orange County (N.Y.) and strung together five consecutive top-10 finishes to conclude the season.

Danny Creeden of Wurtsboro, N.Y., a winner at Thunder Mountain in September, was a career-high third in series points and received $4,000. Erick Rudolph of Ransomville, N.Y., placed fourth after a consistent season ($3,000) and Anthony Perrego of Montgomery, N.Y., was fifth for the second consecutive year ($2,500).

Stewart Friesen of Sprakers, N.Y., registered his second STSS championship in three years. His 2016 championship effort, however, came in the Velocita South Region. He received $8,500.

Friesen reached Victory Lane on two occasions in South Region competition, both in the First State of Delaware. He topped the Diamond State 50 at Delaware International Speedway in May and then, after an extended side-by-side battle with eventual point runner-up Ryan Watt, topped the ‘Blast at the Beach 4’ at Georgetown in August to clinch the title.

“Halmar International stepped up for our program and allowed us to travel more in the southern area,” Friesen said. “It was a lot of fun going to Delaware, Susquehanna (Pa.) and those tracks down that way.”

Friesen pointed to the York County Nationals event at Susquehanna as a key to his title. He crashed heavily in qualifying and his crew executed repairs in time to rally for a fourth-place finish in the 50-lap main.

In fact, Friesen finished no worse than eighth in any STSS South Region race.

Watt, of Boyertown, Pa., won in May at Pa.’s Big Diamond Speedway and earned five top-five finishes including a pair of second-place results at Susquehanna and Georgetown. He received $4,500.

In the first season of the STSS Open Sportsman series, Cochecton, N.Y., driver Charlie Hendrickson Jr. took the title. He received $1,250 and a drum of VP Racing Fuel for his title. Hendrickson won a September event at N.Y.’s Thunder Mountain Speedway among five top-10 finishes.

A number of STSS special awards were distributed.

The annual Contribution to the Series Award went to announcer Jeff Ahlum, who puts in countless hours accumulating stats and information to portray the series and its drivers with professionalism on race night.

Sportsmanship Awards went to deserving recipients Matt DeLorenzo (North) and Ryan Watt (South), both of whom represent and promote the series both on and off the track.

An overall Outstanding Performer Award went to Ryan Godown, for his ability to succeed on both the North and South Regions of the series. Godown won races at N.Y.’s Woodhull, I-88 (twice) and Susquehanna during the season.

Thanks to STSS sponsors, product drawings took place during the night. The recipients were as follows:

The 2017 STSS Modified schedule (North and South) was announced during the Awards Banquet including several new highlights including an event on the Bridgeport three-eighths-mile in September; $10,000-to-win at Susquehanna; the debut at N.Y.’s Albany-Saratoga Speedway; and, of course, the Eastern States Weekend championship event at Orange County Fair Speedway….