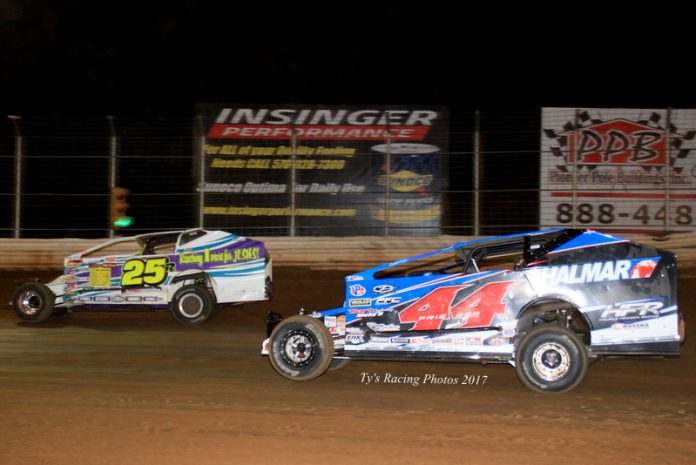 And it was a big one.

Rudolph became the 20th different winner in the 42-race history of the STSS.

“I’ve got to thank Randy (Chrysler, car owner),” Rudolph said to an enthusiastic crowd. “We’ve won some races together, but I’d have to say this one is by far the biggest.”

A healthy field of 40 STSS Modifieds took part in the program, featuring the sole appearance by the division at the Central PA oval owned by Scott Gobrecht and managed by Kolten Gouse.

Rudolph’s No. 25R mount started second in the 26-car feature field. However it was Friesen – who rolled off fourth – making a quick surge forward early in the 50-lap main. Friesen’s Halmar International-backed No. 44 jetted into the top spot on the second tour of the red clay track.

The race’s most significant incident, a four-car tangle in turn one, drew the red flag on lap 19. At that point Friesen led Rudolph, Pauch Sr., Strunk and Von Dohren.

Friesen, picking the inside lane, survived ensuing restarts on laps 34 and 35 to maintain the lead. It was on lap 38, however, that Rudolph was able to utilize the high line in the first and second turns to sweep into the lead.

The race’s final yellow on lap 42 set up an epic run to the finish.

The leaders rubbed rails coming to the green with Rudolph again out front occupying the topside. Friesen drove to the extreme bottom and by lap 45, was pulling even with the leader at the exit of turn four.

The pair raced neck-and-neck to for the last five laps, with Rudolph edging Friesen by a nose at the wave of the checkered.

Friesen, of Sprakers, N.Y., settled for runner-up pay and took over the series point lead in the process, with Oley, Pa.’s Von Dohren – who at one moment attempted a three-wide maneuver for the lead – placing third in Dick Biever’s No. 14s after starting ninth.

Strunk, aboard the Glenn Hyneman-owned No. 126, ended a solid effort in fourth position at a speedway where the Boyertown, Pa., driver was a former regular. Wind Gap, Pa.’s Frank Cozze completed the front five driving Tom Umbenhauer’s No. 4 spec head small-block mount run regularly on Saturday nights at Grandview Speedway in Bechtelsville, Pa.

Finishing sixth through 10th, respectively, were Rick Laubach of Hellertown, Pa., up from 10th in the Ryan Kerr-owned No. 1K; Jimmy Horton of Neshanic Station, N.J., in a steady drive aboard the Halmar International No. 43; 11th-starter Andy Bachetti of Sheffield, Mass., after pitting midway through the event and charging through traffic; Jordan Watson of Milford, Del., after a poor initial draw through the gate; and Pauch Sr., the Frenchtown, N.J., veteran who faded in the race’s final laps.

The consolations were annexed by Jeremy Smith and Ryan Watt.

A busy month of August looms for the STSS. Up next is the ‘Summer of 69’ at Bethel Motor Speedway in White Lake, N.Y., on Sunday, August 6: $6,900 to win for dirt Sportsman on the quarter-mile paved oval. The next Halmar International North Region event takes place Tuesday, August 15 with the Recovery Sports Grill ‘Stampede at ‘toga’ at Albany-Saratoga Speedway in Malta, N.Y. Next up on the Velocita-USA South Region docket is the K&B Auto ‘Blast at the Beach 4’ on the Georgetown (Del.) Speedway half-mile Tuesday, August 29.

SUSKY SHORTS: With a ‘chamber of commerce’ sunny day in York Haven, Pa., a much-improved crowd took in the program over the first edition a year ago. The pit was also bolstered by 40 STSS Modifieds and 29 Central PA Legends….

Feature track conditions were wide and racy, with multi-groove action up to a cushion on the topside. Pre-feature track work paid off with wheel-to-wheel racing….

Duane Howard, second in points entering the night (only seven out of the lead) was a feature retiree with a broken steering box in the Norm Hansell-owned No. 357. Ryan Watt, who had been leading the points, limped to a 16th-place result after his Ron Roberts team completed suspension repairs….

A remarkable effort by the team saw Ryan Godown flip in his heat race and return to qualify through a consolation! Godown’s Searock Fabrication-backed No. 26 had driven back through traffic to run inside the top seven only to get shuffled back to 13th in late scrambles….

Newcomers to the series included J.R. McGinley and Rick Regalski racing out of Western PA. Grandview standouts Doug Manmiller and Mike Gular also made their first STSS starts of the year….

Seven drivers who compete regularly in the Delaware made the tow, with Jordan Watson leading the First State brigade in ninth….