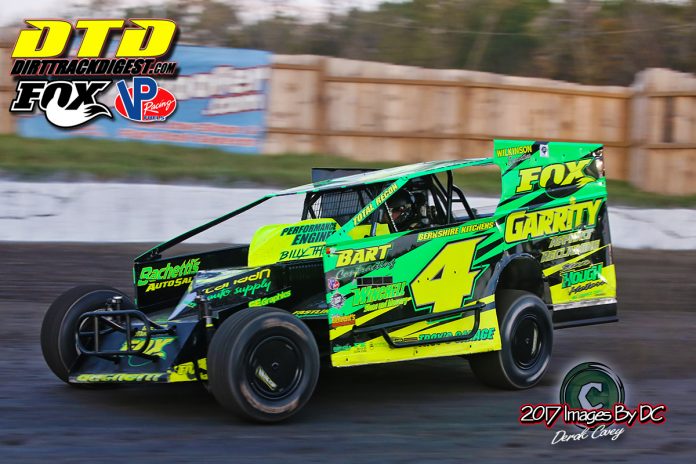 MILLSBORO, DE – The Short Track Super Series (STSS) announced on Saturday a four-year partnership with Sunoco Race Fuels to commence in the 2018 season.

The agreement will bring Sunoco Race Fuels sponsorship to the touring series and offer unprecedented bonuses to drivers competing in the series and at home tracks designated as part of the American Racer Cup, also a Sunoco-sponsored program.

The STSS/Sunoco partnership was orchestrated by Northeast distributor Insinger Performance of Dushore, Pa.

The STSS will continue in 2018 as a big-block/small-block Modified touring series with North Region events primarily in New York State and a South Region traversing New Jersey, Pennsylvania and Delaware.

The American Racer Cup returns as a ‘home-track’ program at approximately 13 venues across the Northeast rewarding drivers for their weekly efforts with more than $50,000 cash and hundreds of tire giveaways.

For ’18, the incentives to enter both events will be as follows.

*A driver winning both the STSS Modified North and South titles, in addition to the American Racer Cup will receive a $25,000 cash bonus courtesy of Insinger Performance

*A driver winning the STSS North or South title and the American Racer Cup will receive a $10,000 cash bonus courtesy of Insinger Performance

The STSS offers $12,500 annually for its North Region champion and $10,000 for its South Region title winner. The American Racer Cup high-point man receives $10,000.

Should one driver sweep the STSS and American Racer Cup, the ‘Grand Champion’ would receive $57,500 – the most lucrative title in all of dirt Modified racing!

“A $57,500 champion in any of the next four seasons is very feasible and would put our series at the pinnacle for Northeast racing.”

Bruce Insinger of Sunoco’s Insinger Performance sees only positives from the agreement.

“We’ve supported the American Racer Cup home-track program since the beginning,” Insinger said. “Now, to link the STSS touring series together with the Cup strengthens the brand throughout the Northeast. Sunoco and Insinger Performance are very proud to be part of both these programs.”

Sunoco will also distribute more than $3,000 in complimentary fuel certificates to STSS racers each of the next four seasons.