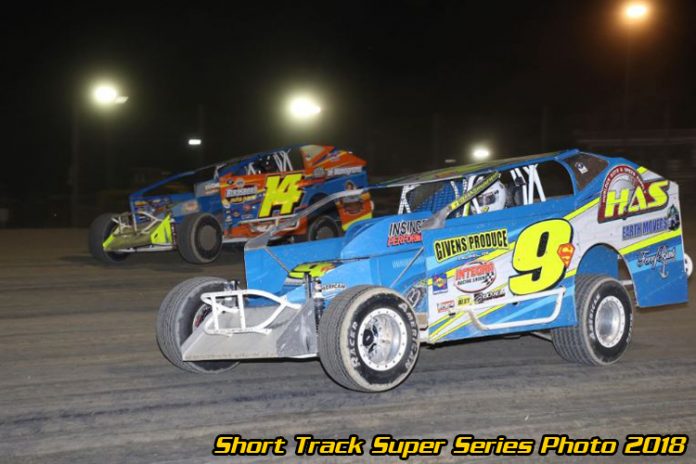 “This car was stuck. It did not really seem to matter where I drove it. It is a lot of fun to drive at this place. There are not many places where you can run side by side for that many laps,” said Sheppard in victory lane.

Sheppard referenced his dueling battle with last year’s Diamond State 50 victor, Ryan Watt, for nearly half the race, where the two swapped the lead position at the start finish line lap after lap.

On lap 13, the lone caution flag of the 50-lap event would wave, regrouping the field, and placing Watt in a comfortable position, on the top. Watt successfully made the pass of Sheppard for the lead, with Ryan Godown, Craig VonDohren, and Rick Laubach in short striking distance.


On lap 21, Watt went to the very topside of the corners in turns three and four, allowing Sheppard to close the gap. Watt admitted in his post-race interview that the top of the track was working well for him in the beginning of the event and then quickly went away.

Watt was able to recover from the mishap, but for not for long, as Sheppard navigated the heavy lap traffic and beat Watt to the stripe by lap 27.

Sheppard took a controlling lead of the event, as Godown and VonDohren began putting pressure on Watt for the second position. The three were under a blanket, as always consistent, David VanHorn was lurking from the fifth position.

With two laps remaining, Sheppard had stretched his lead to nearly a half track over second place runner, Watt. Sheppard remained unchallenged, as Godown edged out VonDohren for third and VanHorn rounded out the top five.

Heats were won by VonDohren, Watt, Sheppard, and VanHorn. The consolation event was won by Frank Cozze.

Anthony Perrego was a victim of unfortunate circumstances as a lapped car slowed in turns three and four. Perrego plowed the rear-end of the slowing car while running third and had to start at the tail end of the longest line. Perrego recovered to the 10th position.

Race winner, Matt Sheppard, also found lap cars challenging, as he made heavy contact on the back straightway while leading the event. “Luckily I was able to keep it straight and not end up in the woods,” said Sheppard in victory lane. With Sheppard’s win, it will extend his STSS South points lead. The Hurlock Auto and Speed team plans to compete for the STSS North and South points titles.

Andy Bachetti was the hard-charger of the event, finishing sixth from his 20th place starting position. Bachetti was in a redraw position during his qualifying event. During a last lap restart, Bachetti fell two positions and out of the redraw position with his small block combination.

After receiving several inches of rain over the last week, the Delaware Motorsports Complex had dried nicely. The teams celebrated with one of the first races in the northeast in a week with sunny and 80 degree temperatures.

New York’s Adam McAuliffe collected the $1000 STSS Crate 602 Sportsman feature event, etching his name on the win column for the first time in his career at Delaware International Speedway.

Bradley Roberts redrew the pole position and was able to get an early lead on the field. The race was for second, as Joe Toth, Jim Housworth, and McAuliffe were three-wide for position.

With five laps remaining, Roberts remained in control of the event with Housworth, Corey Cormier, McAuliffe, and Tom Collins rounding out the top five.

A late race caution regrouped the field with a single-file restart. McAuliffe, Housworth, and Cormier went to battle, all fighting for the second position.

Ultimately, McAuliffe would beat Cormier, Collins, and Housworth to the checkered flag.

In post-race inspection, initial event-winner, Bradley Roberts, was disqualified, deeming McAuliffe the event winner. This would have been Roberts’ third win in a row, at Georgetown Speedway (DE), Bridgeport Speedway (NJ), and Delaware International (DE).

Did Not Start: Michael White