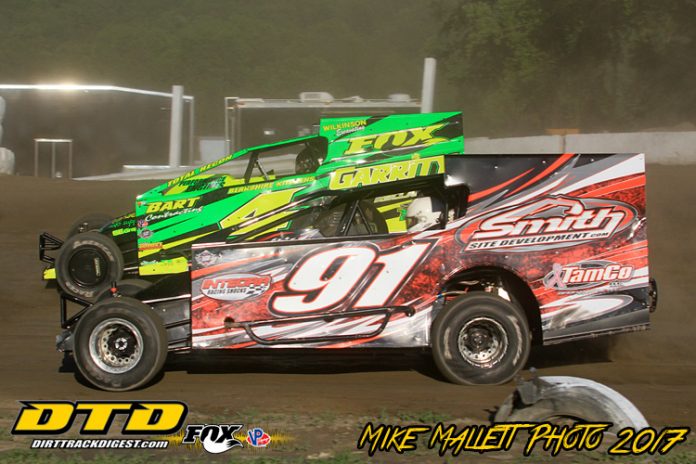 Top performers from the traveling STSS Modified and Sportsman circuits and home-track American Racer Cup were recognized during the festive affair.

STSS announcer Jeff Ahlum served as the master of ceremonies for the largest crowd ever assembled at the STSS ‘Night of Champions’ event.

STSS organizer Brett Deyo addressed attendees and offered many impressive numbers from the ’18 season. During the season, 299 drivers attempted to qualify for at least one STSS Modified event, with an average of 43.7 cars per event. The expanded Sportsman program attracted 274 different competitors.

Deyo added that two events in the upcoming ’19 season will be nationally televised on MAV-TV: the July 3 Firecracker 50 at Fonda (N.Y.) Speedway and Aug. 27 ‘Blast at the Beach’ at Georgetown (Del.) Speedway.

Seven champions were honored during the evening.

Taking home $12,500 as the STSS Halmar International North Region champion for the first time in his accomplished career was Sidney, N.Y., native Billy Decker. Decker was a model of consistency during the season: his worst finish came in the ‘Hard Clay Finale’ at Orange County Fair Speedway in Middletown, N.Y., where he placed ninth to secure the championship by a mere two points.

Decker and his Jeremy Smith-fielded team produced an average finish of 6.0 en route to the crown with five top-five finishes in the nine races.

Ryan Watt of Boyertown, Pa., secured his third STSS Velocita-USA South Region title for Ron Roberts Racing and left the ‘Night of Champions’ with $10,000 cash. Watt started the season with a dramatic triumph at Georgetown Speedway in March and won what was ultimately the series finale at Port Royal Speedway in Port Royal, Pa., in October.

Watt finished five of the six STSS South Region events inside the top-five, with an average of 3.8. Perhaps the performance that sealed Watt’s fate as champion was the ‘Blast at the Beach’ in August at Georgetown when he survived a flip in turn three to finish fifth.

For the second consecutive year, Matt Sheppard earned overall honors for the American Racer Cup utilizing Outlaw Speedway in Dundee, N.Y., as his home track. Sheppard received $11,000 for his efforts: $10,000 from the overall point fund and $1,000 as the Insinger Performance North Region champ.

Teenager Alex Yankowski of Throop, Pa., who competes at Big Diamond Speedway in Minersville, Pa., took the Sportsman American Racer Cup crown and the $2,000 that accompanied it: $1,500 from the point fund and $500 as the Insinger Performance South Region champion. Yankowski won six of the required 10 events at Big Diamond.

American Racer rep Leverknight noted that 242 drivers registered for the Cup in ’18, with $51,450 cash distributed and a total of 575 tire certificates handed out to racers.

The STSS produced a three-pronged Sportsman program during the ’18 campaign with Open Sportsman and Crate 602 Sportsman North and South series.

Corey Cormier made the long journeys south from his home in Otisville, N.Y., worthwhile by taking the STSS Crate 602 Sportsman South Region title and the $1,000 that accompanied it. Cormier had a pair of runner-up finishes and took the title by 17 points over Adam McAuliffe.

A number of special awards were presented during the evening.

Three ‘Horizon Awards’ were handed out by STSS organizer Brett Deyo to competitors emerging as a force on the series while exhibiting a positive influence at the track and on social media. Recipients were Mike Gular (Modified North), Danny Bouc (Modified South) and Daniel Morgiewicz (Sportsman).

The Car Owner of the Year honors for 2018 were bestowed upon Brian Smith of Superior Remodeling. Smith fielded the No. 44 Modified for Anthony Perrego on both the North and South Regions and No. 44 Crate 602 Sportsman for Kyle Rohner in the North Region.

Series official Angela Hanson received the Contribution to the Series Award. She traveled from her home in Johnstown, N.Y., to every series event in addition to many events at Georgetown Speedway, where she handled registration and lineups.

The award teams never want to receive, the Hard Luck Awards, went to J.R. Hurlburt in the Modified North Region and Rick Laubach in the South Region.

By passing a total of 50 cars in the Velocita South Region, Ryan Watt picked up the overall VAHLCO Wheels Hard Charger Award, a set of four VAHLCO Elite Series wheels worth $1,370.

Kirkey certificates went to each of the three Sportsman champions.

Halmar International North Region competitors were eligible to win a Henry’s Exhaust System (value $650). The winner of the draw was Anthony Perrego.

Flach Performance Products provided a radiator (value $575) to be given away via a draw to Craig Von Dohren.

North Region runner-up Anthony Perrego and South Region champion Ryan Watt each received two FOX Shocks as the highest-finishing driver utilizing the brand in each sector of the series.

Anthony Perrego took home a pair of $500 certificates as the highest-placing Teo-Pro car in each region.

Nick Nye received $500 from Hig Fab Chassis (HFC) for placing 13th in the North Region (HFC founder Jerry Higbie actually placed sixth and was in line for the award, but passed it on to Nye).

Behrent’s Performance Warehouse offered $200 gift cards to drivers finishing fourth and ninth in the STSS Halmar International North Region and Velocita-USA South Region. Taking the certificates were Mike Gular and Jeremy Smith in the North and Duane Howard and Jeff Strunk in the South.

Bob Hilbert Sportswear distributed $7,500 worth of certificates at the ‘Night of Champions’ to the top-20 drivers in STSS Modified North and South Regions in addition to the top-10 in all three Sportsman programs and American Racer Cup champions.

BANQUET BITS: All champions received custom champagne bottles complete with photos of their title-winning cars, a unique touch that was much appreciated….

A plethora of door prizes were distributed from a number of sponsors including K&N Filters, Bob Hilbert Sportswear, Sunoco Race Fuels, Behrent’s Performance Warehouse and more….

The 2019 season gets underway on March 15-16 with the Melvin L. Joseph Memorial at Georgetown Speedway for the Velocita-USA South Region presented by Sunglass Central and Design for Vision. The Halmar International North Region goes green on Sunday, April 7 at Orange County Fair Speedway with the ‘Hard Clay Open’ sixth edition. 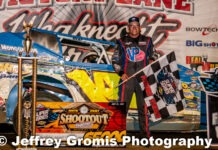