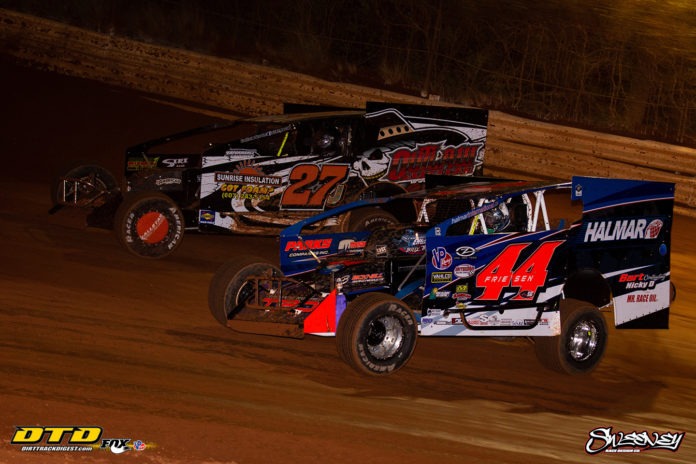 The Short Track Super Series made a wild return to racing at Tri-County Racetrack, with Stewart Friesen completing a “spin and win” to grab the checkered in the Hurlock Auto and Speed 40-lap feature event while picking up the $3,000 payday.

“It was an awesome race car,” mentioned Friesen.  “Thanks to Halmar, thanks to all my guys.  There is a lot of great things going on.  Halmar is delivering food and trying to raise money to help out people in need.  People Upstate (New York) and in the Northeast hopefully get some satisfaction watching these cars down here in the south.  This is awesome.”

Billy Pauch Jr., set the pace at the start of the first Modified feature in two and a half months, with Tyler Siri and Larry Wight battling for second.

Cautions were the name of the game early, with a lap two pileup collecting Mike Maresca, Alan Johnson, and Danny Bouc.

A second major pile-up on lap three was triggered by a rare mistake by Friesen, as the Halmar No. 44 spun and collected Allison Ricci, Erick Rudolph, Tyler Dippel, and sent Richie Pratt on his side.

“I feel awful,” commented Friesen.  “I just got in the slime in three.   I got in there and it got right out from underneath me.  We tore up some cars.  I apologize for that.  That was my mistake.  I’ll be helping a lot of people bang tin tomorrow morning.”

Following another wreck and restart on lap seven, Jared Umbenhauer launched from fourth to second, past Siri and Wight. Umbenhauer immediately pressured Pauch for the top spot, with Pauch high and Umbenhauer low.

By lap 15, Pauch had finally put a carlength between himself and Umbenhauer, turning attention to a charging Friesen.

By the time the yellow flew on lap 21 for Bouc slowing, Friesen had cracked the top five from the tail.

On the restart, Friesen darted by Wight and Umbenhauer to grab second, putting up a heavy challenge on Pauch in an instant.

The pair went to war, with Friesen clawing down low to remain side-by-side with Pauch for laps on end.

Wight and Umbenhauer were having a battle of their own for third behind Pauch and Friesen, but this battle ended with Umbenhauer heading pit-side with a flat under the yellow.

On the ten-to-go restart, Friesen slid under Pauch in the first set of turns to snag the lead. With clean track, Friesen moved up to the top-side previously occupied by Pauch, but Pauch didn’t let Friesen walk away, remaining within a couple carlengths in the final laps.

“He was tough,” said Friesen.  “He had the preferred line up ripping the top.  Mr. Cook told us all night long that you ‘got to get up there on the top.’  We finally got up there down in one and two.  It was an awesome race track.  We were able to get off of turn on that second to last restart.”

With two to go, Maresca slowed with a flat tire, restacking the pack.  A flawless restart by Friesen set him up for success, leaving Pauch to fend off Wight. After a wide-open 40 laps, it was Friesen winning the Short Track Super Series re-opener at Tri-County Racetrack.

Wight wrestled the second position away from Pauch Jr., as they came to line.  The Phoenix, N.Y., driver was able to make the low lane go nearly as well as Friesen did up top.

“I could see Billy was having some problems,” commented Wight.  “I could see the flames coming out his car.  I could see he was having an ignition issue or something.  I was able to hit a couple good laps when he was he was trying to hold on.  We were able to race the line there.  It was really fun.”

New Jersey native Pauch Jr., was disappointed with the final spot on the podium after leading much of the race.  He had some ignition issues which hurt is efforts late in the race.

“I would say about lap 10 the ignition box started going out,” cited Pauch.  “I couldn’t go down the straightaways at all.  I just drove my butt off, for the lack of a better word.  I had to keep it wound up.  That one’s tough.  I thought we had the best car.  I wanted to win that one bad.”

Johnson, who started fifth, crossed the line fourth with Andy Bachetti coming from 25th to fifth.