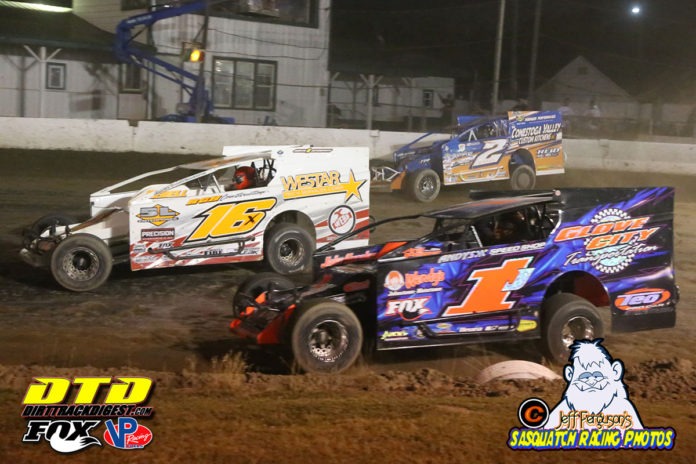 FONDA, NY – Guess who’s back, back again? Grandstands and infield are open this Wednesday night at Fonda Speedway for the second annual “Firecracker 50” with masks and social distancing required. The event will pay $10,000 to win for the Sunoco Modifieds and $2,000 to win for the Swagger Factory Apparel Crate 602 Sportsman.

The Bob Hilbert Sportswear Short Track Super Series (STSS) Fueled by Sunoco has led the Northeast dirt Modified community back to racing through the COVID-19 pandemic.
Competing in North Carolina, South Carolina, Maryland, and Pennsylvania, the STSS is back to the Empire State on Wednesday, July 1 when Fuccillo Automotive Group presents the “Firecracker 50” at Fonda Speedway.

The event serves as Race No. 2 for the STSS Modified North Region after kicking off the title fight, albeit delayed, on June 16 at Pa.’s Big Diamond Speedway. The Crate 602 Sportsman will open their North Region point battle at Fonda.

Last year, the “Firecracker” at Fonda lived up to its name with a wild finish that brought the crowd to its feet. Stewart Friesen, after pitting for a flat tire, pulled off the last-lap, last-turn power move on Matt Sheppard to pick up the $10,000-plus top prize.

The complete “Firecracker 50” information sheet has been posted on the STSS website with times, rules and general information: http://shorttracksuperseries.com/wp-content/uploads/2020/06/Firecracker50InfoSheet.pdf

The event will be streamed live on Dirt Track Digest TV (www.dirttrackdigest.tv) in addition to in-person attendance.

The first 36 Montgomery County residents to email contest@thefondaspeedway.com will receive a free passcode to the DTD TV coverage on Pay Per View for the Firecracker 50 at the Fonda Speedway, on Wednesday July 1, 2020, compliments of Montgomery County Executive Matt Ossenfort, Sheriff Jeffery T. Smith and Emergency Services Deputy Coordinator Jeff Kaczor.

We have officially reached Phase 4 of the reopening process and with the “Track of Champions” Fonda Speedway being a centrally located venue that brings visitors from all over the Northeast, Montgomery County Executive Matt Ossenfort, Sheriff Jeffery T. Smith and Emergency Services Deputy Coordinator Jeff Kaczor felt this would be a great opportunity to try and bring some life back into Montgomery County.

They have been working hard over the few weeks with local promoter Brett Deyo to come up with a way for people to still enjoy this local racing event while also following best safety practices pertaining to Covid-19.

In the history of 50 lap events or longer at Fonda, there have been a total of 68 different winning drivers in a total of 280 modified (both big and small block) feature events from 1953-2019.