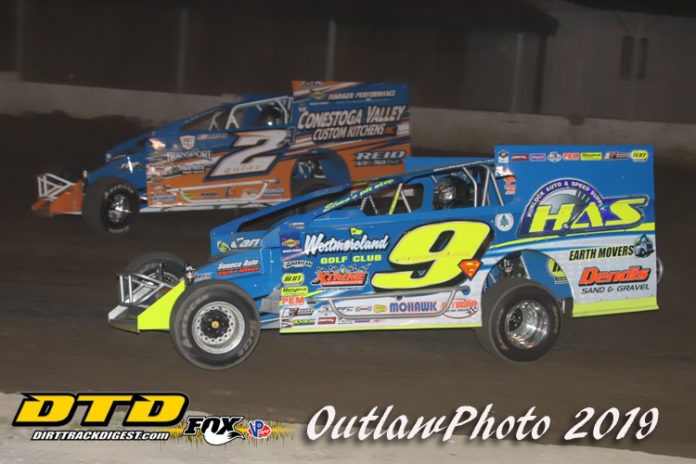 FONDA, NY – After a rainout of the “Firecracker 50” on Wednesday evening, the “Track of Champions” Fonda Speedway will be back in action on Saturday, July 4 with a program called “The Red, White, & Blue Special” sponsored by the Recovery Sports Grill.

The rain date for the $10,000 to win Bob Hilbert Sportswear Short Track Super Series (STSS) Fueled by Sunoco North Region Modified “Firecracker 50” event is set for this coming Sunday, July 5 with hot laps at 6:00 p.m. and racing at 7:00 p.m. The STSS North Region Sportsman will also be in action on Sunday in a $2,000 to win feature event.

At all Fonda Speedway events, masks are required for entry. Social distancing and CDC guidelines must be followed.

FONDA SPEEDWAY HISTORY FOR THE WEEK OF JULY 4

Ten years ago, on 7/3/2010 the winners of events at the Fonda Speedway were Elmo Reckner (Modified), David Towns (Sportsman), Kenny Gates (Pro Stock), Chuck McSpirit (Street Stock), George Catanzano (IMCA), and John Scarborough (Crate 602 Sportsman). The win for Reckner was the first of two in his career in the Modified division at Fonda with the second one coming on 7/9/2011.

Fifteen years ago, on 7/2/2005 the winners of the events at Fonda were Dave Camara (Modified), Robert Perry (Sportsman), Butchie Irwin (Pro Stock), Cassidy Wilson (Street Stock), and Danny Ballard (IMCA). The win for Perry was the first of two in the division with the second one coming on 8/4/2007. The win for Wilson was the first of 28 in the division with his last one coming on 9/24/2011. Wilson also has one career win in the Pro Stock division on 6/2/2018.

Twenty years ago, on 7/1/2000 the winners of the events at Fonda were Ronnie Holmes (Modified), Tony Farone (Sportsman), Chris Morris (Pro Stock), Paul Chichester (Street Stock “A”), Dave Horning Jr. (Street Stock “B”), and George Catanzano (IMCA). The win for Holmes was the first of three in the division with his final one coming on 7/28/2001. The win for Farone was the first of two in the division with the other one coming on 8/19/2001. Farone also has five wins in the division he currently competes in, the Crate 602 Sportsman.