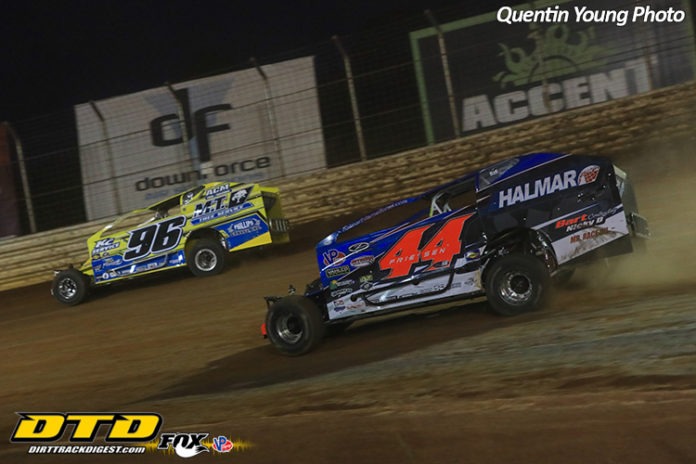 David VanHorn led at the start of the 50-lap Modified main, but didn’t get to lead for long, as he blew a right rear tire on lap two and surrendered the top spot to Richie Pratt. Pratt held tough through the opening laps, with Rick Laubach slotting into second. A couple early cautions kept the pack bunched up, including a lap seven spin by Friesen.

Pratt had a bad restart, with both Laubach and Pauch sliding by on the green, then slipping to fifth after Craig VonDohren and Sheppard got by. Up front, Pauch was all over Laubach, with both drivers on the cushion but Pauch often checking out the middle. Pauch took a swing at the lead on lap 14, but a caution nixed that challenge.

Pauch shot a slider on the restart, but Laubach crossed and kept the lead. Sheppard went to third, while Laubach and Pauch went back to their close-quarters battle. At halfway, the top three of Laubach, Pauch, and Sheppard were nose-to-tail, with the top two still up high, but Sheppard searching on the extreme bottom.

Laubach started to fall off the pace of Pauch and Sheppard, surrendering third to Friesen on lap 36. Meanwhile, Sheppard was still on top of Pauch, but wasn’t quite in the position to take the lead away. On lap 40, the battle came to a stop with Tyler Dippel breaking and drawing a yellow.

Friesen went to the far bottom on the restart, taking second from Sheppard, but Pauch fired well out front. Friesen went searching for a fast lane, while Pauch remained married to the top. Friesen hung within two car lengths of Pauch and seemed to be settling in somewhere in the middle of the track, but a lap 44 yellow reset the battle one last time.

Like before, Pauch launched good, even better than the last restart. Friesen went back to work, but couldn’t stick with the Pauch #96 as well as before. This meant Friesen had to fend off Sheppard in the final laps, with Pauch having a chance to get some fresh air, a rarity for the leader in this race. When the checkered waived following 50 hotly-contested laps, it was Pauch winning over Friesen, Sheppard, VonDohren, and Larry Wight.

“Oh man, we’ve won some big races, but this is probably the biggest with battling with all those guys,” Pauch Jr. said. “When I left the house today, my little guy wanted a shout out in victory lane. I didn’t think we’d get here, but we’re here, so he gets a shout out. Honestly, it’s amazing to think of how good we are right now and how comfortable I’ve been with this car. This place has been my achilles heel, and it feels real good to finally put together a run like this here.”

Friesen has had a few back-to-front runs this season, tonight being no different. Following a lap five spin, Friesen nearly got the win.

“We had a great car, but I made a mistake and chopped Matt going into three and spun myself out,” stated Friesen. “I probably hit a few people early on trying to find a lane, the top was so far out and the bottom so far in I was trying to find a place to be. This is the best the track has been when I’ve raced here, it was awesome with a few different grooves to run.”

At one point in the race, Sheppard looked to be the favorite for the win. However, the couple cautions in the final laps didn’t help his cause, and Sheppard had to settle for third.

“We just didn’t fire good on restarts,” Sheppard noted. “I thought we had a shot at that one, we ran Billy down and was searching around him, but we didn’t need those yellows. We’re not bad, but a little off where we need to be.”